What equipment should I buy to connect over a hundred WiFi devices?

In their wisdom, they auto name the 2G and 5G connection the same (!) So now I am spending time out of my life trying to figure out how to rename them to clearly see which one I am connecting to, 2.4G or if you 5G....

Whoever made this difficult at Ubiquiti... Why!?

Also, Overclockers app should not auto display unnecessary information about which phone I am using to post on the forums. That's an opt-in feature, not opt-out... Do you not agree?

Why do you care? The AP will move the device from 2.4 to 5 GHz it it can. In fact, the AP has a Â“band steeringÂ” option where it will automatically try to keep as many devices on the higher bandwidth 5 GHz spectrum to keep the lower bandwidth 2.4 GHz spectrum as free as possibleÂ…it will only be able to do this if both the 2.4 GHz and 5 GHz have the same name.

Also- the AP can broadcast multiple SSIDs, where each SSID has its own VLAN (of course the switch needs to be able to properly route VLAN traffic)

I care because if I am in the same room as Uiquiti, then I easily connect to 5GHz. Now I am moving away and what happens - I have no connection while it switches to 2.4 GHz. Better have a stable 2.4GHz connection permanently.

Which brings this important question - the very reason I am doing this - so if one of Google Audio Chromecasts is within the 5GHz range connection - and another is not - do I connect all Google Audio devices to 2.4GHz to ensure problem-free audio synchronization or do I connect some to 5GHz and others to 2.4 GHz - it seems like having them all on 2.4 GHz will result in more stable synchronized music streaming - I have seven of them on the property.

And you rename 2.4GHz and 5GHz like this: Start the app - go into your device - Settings gear icon in upper right corner - LOOK FOR SAME AS 2G button HIDDEN IN THE JUNGLE - tap to turn it off. Phew. There went 20 minutes of my life.

The handoff is seamless and you wonÂ’t even know that the AP loves you from 5 to 2.4.

I have WiFi calling enabled on my phone, and I can walk around my entire property on the phone without interruptionÂ…going from 5 to 2.4, or even getting passed from AP to AP.

Dude - this is a high end AP, not a piece of junk NetgearÂ…


Also - I have all my Sonos devices connectedÂ…donÂ’t know if they are connected at 2.4 or 5Â…but they all synchronize properly (I could look in the Sonos app, but - again- I donÂ’t care what band they connect on).

This is less important but as a matter of a full review: You have no way of knowing which connections are being used in the app (!) It displays ALL connected clients - the app does not tell you which ones are connected to 5GHz and which ones are on 2.4GHz.


Now why is this important!? Because if you have a thousand devices - you can only connect so many on 2.4GHz and then others need to go on 5GHz because you have reached the limit.
So that's why it's important to know and by the way the specs say 300+ clients. What if they mean 100 per band!? Now that would suck. A hundred on 2.4GHz is not enough! Almost all my devices are not capable of using the 5GHz band...
I guess I am about to find out the hard way.

The controller software tracks that for you.

If both the 5 and 2.4 have the same SSID, the AP figures out the best way to connect folks.

Yes, but you have no way of seeing how many devices are on 2.4GHz and how many are on 5GHz - even if they are named differently. Ubiquiti displays 'Connected Devices' - all on the same list.

If they only allow a hundred on 2.4GHz - how will I know how many more available slots I have left on the 2.4GHz band if they are mixing 5GHz connections on the same list as the 2.4 GHz connections!?

When you have the controller installed, you get more information. Here are two screenshots from my controller: 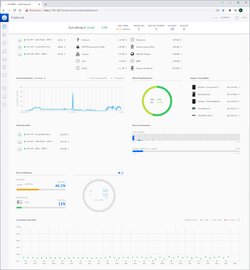 More detail behind current connected clients...9 on 2.4 GHz, 11 on 5 GHz, and the traffic going through each. 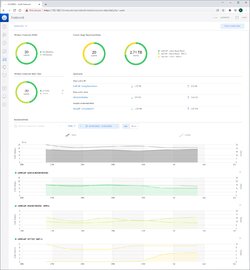 More detail for the connected clients, showing which band they are on and what they are communicating at. The "WiFi Experience" score for each client tells you how good the communication is between that client and each AP. 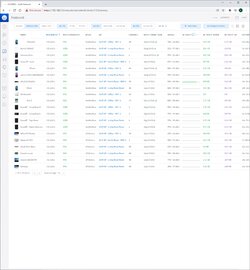 More info...showing devices changing channel (they have the same SSID) and changing between Access Points...all without losing connectivity. 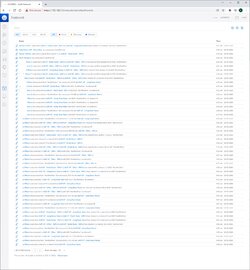 First of all thank you.
So they withhold this vital information from the app. Brilliant.

I understand there is something called 'the Controller' that is not the App. Separate from the app. Where is this 'Controller' obtained from?

- UniFi Network Application (this is the controller)

The controller will also let you upgrade firmware easily.

It may seem like "red tape" as it's different than what you are used to. If you decide to go with more UniFi products, one instance of the controller controls them all. For my network, the controller is controlling:

Within the controller I can setup networks/VLANs/firewall rules (if I have a UniFi router), control switches and switch port profiles...all kinds of good stuff.

For instance, of you look closely, you will see that you see two separate Networks:
- NerdNetNew
- IoT-Devices

There is also a separate 3rd guest network, and a 4th network for my camera connections.

Within the UniFi controller, I setup these 4 networks, say I want them to be VLANS, create wireless SSIDs and link them to the networks, hit "save" and the network automatically configures itself...router, switches, APs...BAM.

Without this "one pane of glass" I would have had to gone through multiple individual webpages on multiple devices, entering things multiple times...etc.

Yes, I was face-palming earlier not being able to find the firmware upgrade option anywhere!

The app not having these things is more of lack of common sense, I mean all other apps for every other product have upgrade firmware on them.

Is it cool not to have this option on the app? And is it cool not to tell customers hey you may want to buy this Injector with this purchase or else we will charge you $16 shipping for a $14 injector when you find out the hard way that without this Injector, you can't power up this two hundred dollar device you're about to buy from us... [emoji846]

1.) If you have the controller installed, you can upgrade the firmware from the app

2.) PoE is awesome...and they are assuming that if you are purchasing a PoE device then...well...you know what PoE is and how to power it.

So what is the link to the controller software, apologies, I just spent some time looking for it and couldn't find it.

Also thanks for bring the PoE up. In may case, what am I missing by not having it again, I connected the Ubiquiti to my router and have not connected anything else.

You're looking for the 'Unifi Network Application' under software in the list, choose the one based on the flavor of OS you will be instaling it to.

Also, if you want to have multiple SSIDs for different bands you can do that as well. I have a '2' and a '5' SSID at my house for what it's worth, as well as a guest network on 2.4.

At some point you can go down the rabbit hole of separating off the IOT devices in your house onto their own VLAN so they don't/can't talk with internal devices for security reasons, but you can look that up when you have time. Plenty of videos and guides on it.
OP

I am about to start adding, if you tell me what to do, I can do it from the get go. I have security cameras, audio players, light and power switches, and cell phones and laptops.

Doesn't affect stability, think of it as having two driveways to get to a street.

Again, this is something you can look up when you have time and doesn't need to be accomplished in your initial setup. Just another thing to do when you get more comfortable with everything.

Okay. Later I will do it. Thank you for that useful suggestion.

I gave up on trying to manually install the Firmware update. What a nightmare. The app says I am fully updated, but they list new firmware in that link. Is it Beta? Is that why?

When I try to install the software, first it wants Java then it can't adopt the device no matter what I do. Do I need to extend the ethernet from my computer to my router for this to work?

For just a firmware update, they made it way too complicated and unclear. Later this evening I will add all the devices and discover true limits of this hardware the hard way
OP

First results are sooo interesting. Get this.
[First of all Netgear/tp-link = 30 minutes of hair-pulling for each device, whereas Ubiquiti just connects. Yey!]
Here's the surprise:

I start connecting Google Audio Chromecasts on the 2.4 GHz band and when I get to the ones furthest away - get this - the only available connection is 5 GHz. Wut!?

HOW is 5GHz available but 2.4GHz is not for devices furthest away!?


Now the test: Oh no! SHAKY music on some of them.
I *immediately* reconfigure all of them to be on the 5GHz band.

Now music flawless. Now they are all on the same band: 5GHz.

So my theory of having them all on the same band being important appears to be true.
Therefore it was VITAL to label the 2.4GHz & 5GHz connections differently so you can CLEARLY see what you are connecting to.
Labeling both connections the same because of "seamless switching" has just been demonstrated to be false - unless there is a second explanation for my test scenario.

Also 5GHz reaching 65 feet on Ubiquiti = incredible. Ubiquiti! So what else on the market compares, just out of curiosity because Ubiquiti came through - although the actual real test will be Saturday when music streaming will last for half a day - non-Ubiquiti devices could never handle that.


Should I reboot the Ubiquiti every so often? How often if so?

You shouldn't need to reboot them outside of firmware updates
You must log in or register to reply here.

J
I think I need a router