FEATURED What memory is better for Skylake / Z170

Skylake is already in stores and I bet that many of potential users are wondering what memory is best for this new platform.
I don't want to make long thread from my side with many examples which are confusing and barely anyone will read it. I also wish forum members to take part in some tests or make their own conclusions.

1. Single / Dual Rank memory
As some users already noticed, on previous platforms we could see that single sided memory modules ( single rank ) are slower than double sided modules ( dual rank ). That situation was barely visible on Haswell-E but it back since Skylake premiere.

Below is one example made on DDR4-2666 8GB/dual rank modules and [email protected] 4GB/single rank modules. CPU and cache clock = 4.2GHz, memory clock = 2666 and main timings 15-15-15-35 1N. Some of the sub timings are slightly different but it's not really important in this case. 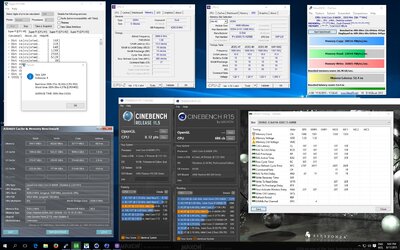 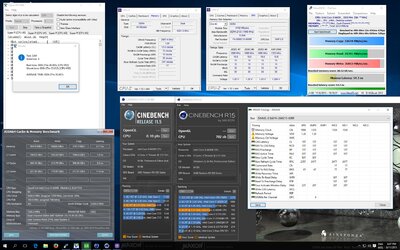 Quick conclusion:
Dual rank memory is faster in almost everything but latency is higher. It's not as big difference as in DDR3 on Z87/Z97 motherboards but we can clearly see it in all tests. AIDA64 is showing 0.5-2GB/s difference.

In all previous generations memory clock was never the most important factor looking at effective memory speed. Skylake however has really fast cache so memory latency is not slowing it down and high memory frequency is becoming more important.
Some examples should be added soon but you can check my memory test list as there are already results on Z170 motherboard.
Memory clock is important but ... look next point.

On Haswell-E we could see that cache clock was even more important than memory clock to achieve higher memory bandwidth. Also on Skylake cache clock is really important. Actually if you won't overclock cache clock then buying really fast memory has no point.
I will try to make some examples and add it later but feel free to check it yourself and add your results to this thread.

Cache clock is little tricky on Skylake and some users may not expect how it's acting while overclocking. It's possible to set it even higher than CPU clock without issues like it was happening in Haswells. What more, memory performance will be still high even if you lower CPU clock much below cache clock. On earlier platforms memory controller speed was limited by CPU speed and raising CPU frequency was giving higher memory bandwidth.
It's just something worth to mention.

My processor's cache clock was able to reach 4.8GHz while CPU 4.9GHz on custom water cooling. So what is tricky is that CPU and cache voltage is tied so raising CPU voltage you also set higher cache voltage. We still don't know what is the safe limit for air/water cooling.

5. If memory has to be designed for Skylake to work ?

Yes and no. Every DDR4 should work on Skylake but I already found memory kits which won't run using XMP profiles so if you don't want to have any problems with memory then better pick memory designed for your motherboard.

This thread includes some early tests and conclusions so it's possible that not all is 100% correct but I hope it will still help if you aren't sure what memory to pick.

My memory tests and reviews are as always in separate thread -> http://www.overclockers.com/forums/showthread.php/732290-Woomack-s-memory-test-list

Thanks for the thread, Bart.

Are there any "skylake" memory kits out? I haven't looked since release day, but at that time, there was not.
OP
W

Ripjaws V = many available but I haven't seen anything above 3200 in stores
Ripjaws 4 for Skylake = slightly worse timings than Ripjaws V, wide availability in EU
Trident Z = not available even as review samples
Corsair refreshed their Vengeance kits = barely available, I can order one 3200 kit but have to wait about a week
Team Group has new high clocked kits = not available, were only listed on motherboard compatibility list
Avexir = the same as Team
Geil = no new kits, older were available in 2/4 stick kits
Mushkin = no special skylake kits but older were available as 1/2/4 sticks, version in new heatsinks will be out soon but still green PCB
Crucial = no skylake kits but their Elites work fine on Skylake
Kingston = released skylake kits but these are the same Fury kits up to 2666 just in 2 stick kits
ADATA = probably had something on the way but no news so far

I don't know if I missed something.

Just out of curiosity Woomack, could the tRFC be too tight on the G.Skill Ripjaws 4 3000 set and maybe be causing some instability? Therefore hindering the runs?
OP
W

This 3000 kit is working stable @3333 CL14 with tRFC 320 so I don't think it's causing issues here.
I've noticed that performance difference while I was testing memory at higher clocks and just thought I will compare it at the same clock as I had 4x8GB 2666 kit at work which I could test.

Woomack said:
This 3000 kit is working stable @3333 CL14 with tRFC 320 so I don't think it's causing issues here.
I've noticed that performance difference while I was testing memory at higher clocks and just thought I will compare it at the same clock as I had 4x8GB 2666 kit at work which I could test.
Click to expand...

I was just curious if maybe it was an issue, thanks for posting it up.

I've noticed that ASUS is now adding more detailed IC info in tested memory list ( not for all kits but many ). For example here is my motherboard:
http://dlcdnet.asus.com/pub/ASUS/mb/LGA1151/MAXIMUS_VIII_RANGER/M8R_DRAM_QVL_20150805.pdf
As you see, all tested 3000+ memory kits from Corsair and G.Skill are on the same Samsung chips marked as K4A4G085WD. Not to mention that ASUS tested only 4GB modules at 3000 or higher frequency.
G.Skill probably tested their memory also on other motherboard brands than ASUS but in almost every 3000 or higher kits there is info only about ASUS motherboards. However there are couple of kits at 3200+ and 8GB modules which were tested.
All above suggests that 8GB modules are ( much ? ) harder to overclock. Soon we will probably see how it looks in real.
Last edited: Aug 12, 2015
OP
W

I had no chance to test them. Corsair in my area is making a lot of problems with review samples and other brands are simply cheaper and more interesting. That's why there is only one Corsair DDR4 kit on my list. I wish to test more Corsair kits but my budget is simply too low.
I can only tell you that Corsair has barely any kits designed for Skylake on the market and they are starting to appear right now. If you have problems with your memory then or Corsair made something wrong or they designed their memory for X99 boards. Most brands are selling the same memory as for X99 but in kits of 2 memory sticks and say that it's memory for Skylake. There are little differences in timings what at 3000+ clocks cause some stability issues and you have to play with sub timings.
If you can't make it work at XMP settings then probably your kit wasn't designed for Skylake. However Corsair is making almost all their new kits on Samsung IC so you can take a look at these G.Skill threads as there are probably the same memory chips and should work at similar settings as your Corsair:
- http://www.overclockers.com/forums/...x8GB-)-DDR4-3200-CL16-1-35V-F4-3200C16D-16GVK
- http://www.overclockers.com/forums/...x8GB-)-DDR4-3000-CL15-1-35V-F4-3000C15D-16GVR
3000 kit is a bit weaker but both are on the same IC series.

Long story short - initally the PC wouldn't start once the new sticks where in - not even the BIOS screen - had to update to v1.04 (MB BIOS) - clear settings, etc.
Anyhow, long story short - all 4 sticks seem to run fine. Ran MemTest86 overnight for 8+ hrs with no errors reported.
Picking up XMP Profile in Bios and running 3200 Mhz.

Funny thing is though, my 3DMark Firestrike Result went down slightly and also, if I try and run MaxMemm2 now - it hangs and basically crashes the PC - have to do a Hard Reboot.

Any suggestions on other tests I can run ??
OP
W

XTU, AIDA64 or any version of Prime95/blend seems good for memory tests. However it's good to add some mixed tests like 3DMarks or PCMarks to check general system stability.
Most Z170 motherboards have guaranteed 3200-3400 max memory clock when you use 2x8GB or 4x4GB. 2x8GB is even harder to OC. I'm not sure if there are any additional settings on EVGA motherboards as I had no chance to test them. If you have stability issues at 4 memory sticks then check higher VCCSA voltage.

Hey Woomack,
Cheers for the reply and the info provided.
So far I have done the following –
Ran MemTest86 for 8 hrs overnight with no errors. It recognised all 16GB of RAM and from what I can tell reading online, it tests all the RAM.
Also purchased and ran Mem Test Pro for 5+ hrs overnight - it split the 16GB into 5 different test runs and no errors there either.
Ran Intel XTU Mem Stress test for 30 mins and got a pass result.
AIDA64 was run as well but as it’s a trial version, a lot of the information was blocked out.
Going to run a CUSTOM P95 tonight for 2 hrs.
Can't find any issues with the RAM itself - all looks fine bar MaxMemm2 not working and a slightly lower 3DMark Fire Strike score.
I would like to test 1 stick at a time in Slot 2, but the Cooler makes it hard to get at Slot 1 and would rather not remove them.
Finally, can I ask whether there is any advantage to running Memtest86+ ? (as opposed to the tests I have already run) ??
Many Thanks
OP
W

I'm not using Memtest86/+ lately as it has stability issues on some boards or I can't run test on more than 1 thread. Personally I trust more mixed tests on Windows applications. There is also HCI memtest which works good.

Difference in performance at 4 memory sticks can be related to auto memory settings. Motherboard is probably changing sub timings to their optimal values for higher capacity memory.
You must log in or register to reply here.

Where is DDR5 speed going?