Whats your Intel LGA775 stock HSF base made from ? Copper or Aluminium ?

Whats your Intel LGA775 stock HSF base made from ? Copper or Aluminium ? *UPDATES*

For those who still insist in using Intel LGA775 stock HSF, if you got a Aluminium core version, you better find your OC-er friends and ask for theirs if they got the copper core version. I assume most of them will give it or sell them cheaply.

I know, most OC-er never use them, just curious, is yours Copper or Al base ? And what CPU it came with ?

Just helped a friend (not an OC-er) recently on his new boxed retail E2140 and noticed that the Intel stock HSF base is Aluminium instead of copper.

Fyi, I own two un-used from old D805 and D925, both are copper base. Run some few quick testings (not thorough) with AS5 on both and found out that the copper base beats the aluminium by 3 C cooler on average ! Anyone can confirm this ?

Also the el-cheapo Al base feels lighter and looks cheaper too, I can't explain it but seems like the finishing is worst than cooper one ! 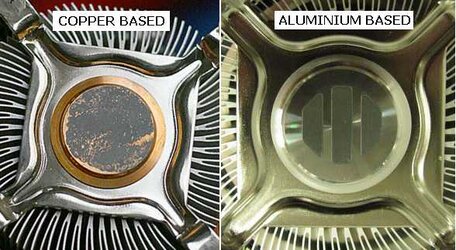 Looks like Intel is trying to save some money, and it ends up I gave mine to my friend since its better.

Since I got my friend's crappy Aluminium core one, was curious and yanked out the fan and here is what I found !!

Here, some illustrations for better explanation for what I found, the cut view. 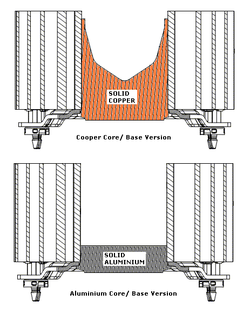 e6700 came with a copper, and its horrible
J

Both are in the bin, had one with the D805 and one with my current E6600. Both were copper. Neither were used.

I think the Allendales and Conroe-L processors ship with aluminum base heatsinks while the Conroes ship with the copper one.

ancalime said:
I think the Allendales and Conroe-L processors ship with aluminum base heatsinks while the Conroes ship with the copper one.
Click to expand...

mine e4300 came with copper

Kind of odd to have 2 different types... but makes sense too. I figured there would be a larger spread in temps between the two than just 3 degrees.

My E6420 came with an Aluminum that has a copper base.

Kind of odd to have 2 different types... but makes sense too. I figured there would be a larger spread in temps between the two than just 3 degrees.

Those 3 C difference just from a brief quick & dirty testing, not thorough.

What is your finding ? Higher than 3 degrees ?

Really? I thought I remembered my E4300 with an aluminum base. Can't tell now cus I threw it away.

Pnetium 4 with a copper base
OP

The Al core version is "ALOT" cheaper than I thought it was on the 1st place !

Look for my finding in cross section of those HSF ! Its really that bad !

CrazyIrish said:
They are probably just shipping the lower wattage chips with the aluminum.
Click to expand...

Sorry to hijack an intel based thread to bring amd into this, but they were doing this with the X2 series (don't knoq about the AM2 socket). But I believe the 69 and 89 watt versions came with a solid copper/aluminum heatsink (don't know which) but the 110w version came with a copper base and heatpipes, and its actually kinda nice for a stock heatsink.

If anyone gets better numbers with Aluminum it is either because:
1. It is an entirely different HS with better "design" not having to do with Cu/Al
2. Something screwy is going on, difference of ambients, or mounting mistakes.

Copper has a higher thermal conductivity then Aluminum. Now what would be awesome, is if they made a HS with a Diamond(best by far) or pure Silver(2nd best) base.

my 4300 came with a copper base HSF
You must log in or register to reply here.

Has anyone ever ordered from FAWNSALE.com???

Hardware dying or something?

Y
My experience overclocking the 1080ti