Where did I come from, where should I go FX-8320 overclock

I've been overclocking a lot recently and I'm trying to eek out every nuance of power I can get from my current setup. I wanted to create a thread explaining everything I've done thus far, but it was overwhelming trying to think of what you guys actually needed. For now, the hardware:

All this said, I was going to have my GPU overclock looked at as well, but I'm not sure if I should make a second thread for that. For now, I'm focusing on my CPU and the settings I still need tweak and switch to get the absolute best performance I can get. I'm also not sure if I should get an AIO Corsair 280mm watercooler or a new ~500GB SSD, so advice on that would also be appreciated. I'll try to get you any information I can, just let me know and I'll get you the screen caps. At my current overclock I was able to run Aida 64 with everything ticked for an hour, no errors, P95 for a half hour (no errors and temps stayed below 60-61°C) but running AIDA 64 with only FSU and GPU ticked did bring my temps to 65-66°C and cause some throttling. I need help with Fine Tuning and pushing the limits even more.

Honestly, not sure you will really notice a difference outside of benchmarks increasing the CPU speed. Judging by your temps, you are at the limit anyway. Im just not sure a $110 cooler is going to get you anything tangible (and it wouldn't be a Corsair we suggest). You will get a much better 'feel' if you purchase an SSD instead of a HDD for your OS and applications drive.

A different thread for your GPU overclock, yes...

I would first check that OC with P95 blend. And post up some pics of temps with HWMonitor free. Have it open while running P95. Then post some SS of CPUz main/memory and SPD tabs.
OP
B

When I installed my ram all my OC settings were wiped and now I'm having trouble running at full speed. I know you can't really run four sticks at 1866, but I can't seem to get it to boot to anything. Either way, I did do Prime blend for an hour and temps sat at 60. I guess I'll be overclocking from scratch again (which I honestly look forward to because it's fun for me.) Any advice, since I'm at work and still have an hour till I get home.

fx does not really like 4 sticks of ram some times, stick with just 2 sticks for now.
and do as johan45 asked.
OP
B

OK, I'll put the two extra sticks in my MSI board with the 4350 in it. I'll post updates tonight as I get them.
OP
B 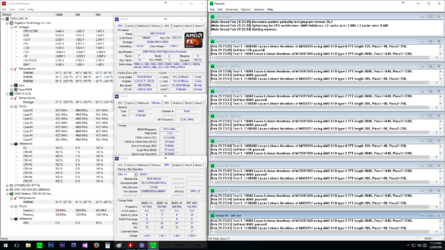 Start pushing the bus clocks and top it off!
OP
B

In what increments? And will this require additional voltage?

Try and see how far you can get without adding voltage to anything. Test along the way.
You must log in or register to reply here.