why are my temps so high

i have a core 2 duo E8400 being cooled by a corsair A70 with 2 120mm fans in push pull config. im using arctic MX2 TIM my psu also has a 120 mm fan, my idle temps are at 41c at stock temps any idea whats causing this cant overclock if stock temps are this high have used speccy hardware monitor and real temp and they all give the same results

my room temp is 70 degrees F

Are you sure the A70 hasn't lost the coolant from the pipes? That's got to be a pretty old unit. They quit making them several years ago. And have you removed the cooler to check the TIM spread pattern for indications there isn't good contact?
OP
K

Idle temps are pretty useless. But where are you reading that from? If its the bios, there is a slight load there and ie temps are lower in windows...

Anyway, what are load temps?

Use realtemp for temps.... leave it idle for 5 mins... then run p95 small fft for 20 mins (what version of p95 btw?)... post screenshot of temps sbowing idle and load. Thread is all over the map.

Please use punctuation for ease of reading.

I recall many different cases with terrible airflow you were considering. What case is in use right now?
OP
K

ATMIN im using my modded 4u server case its a case thats in desktop form factor i.e. not a sff case but then also not a tower case also if im not mistaken. The E8400 and other CPUs from that era had a common problem where the DTS (the Digital Thermal Sensor) would be unable to show temperatures below a certain point. This was referred to as having "stuck sensors". It was usually at some temperature somewhere around 40. Yours seems to have an inability to read any temperatures below 41. This is ok though because the DTS is only designed for accuracy at temps above 50. It doesn't mean 50 and above are perfectly accurate, but it means the temps get more and more accurate at 50 and above (as the temps get closer and closer to the TJ Max, which is 95 or 100 for the E8400, I forget which). If the temps were to somehow reach the TJ Max, the readings would be pretty much 100% accurate for safety reasons because the CPU's thermal safety would kick in. am i not correct there lastly

im using version 28.10 of prime95 and load temps while testing with prime were between 41c and 43c after 20 mins of testing

Your good up to the boiling point of water 90c.
OP
K

Sounds like the software is not reading correctly if the temps are the same under load. Would not say a on die Digital temp sensor is stuck.
W 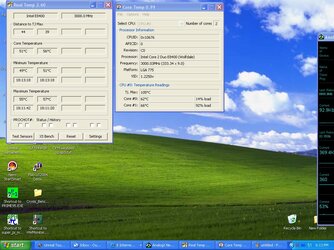 I am sure you have vastly more experience OCing than I do, but when you're facts aren't accurate it makes it hard to believe your advice.


Which is a drastic difference from Core Temp simply stating 105 as the TJ Max.

Your proof is irrefutable when you have two programs running showing vastly different temperature readings and TJ Max values.
Anything you say is definitely legitimate when you're boiling your water at 90°C.

I don't see a problem here is load temps are in the 40s C. Who cares if the idle temps are not reading correctly. I know that A70 cooler and it's a beast. Max load temps in the 40s seem reasonable to me.
OP
K

trents said:
I don't see a problem here is load temps are in the 40s C. Who cares if the idle temps are not reading correctly. I know that A70 cooler and it's a beast. Max load temps in the 40s seem reasonable to me.
Click to expand...

Anyway, back to facts and reality, glad the temps are good on load where it matters. THat MX-2 gave you about 1.5C better temps than AS5. Enjoy that rig!

R
Help with an older system - why are my temps so high?