Why oh why... the gpu block i original wanted.. but couldnt find ..found it now

Sooo the Asus strix 1080ti PCB is different from the reference card.. Not sure exactly whats different about it, probably something to do with the power.. But regardless.. All the waterblocks from various companies are licensed... Alot of people say thermaltake copies and i thought so too until i realized how many companies have the same designs.. There is no way it can be a copy it has to be licensed from whoever originally built it there are too many similarities between companies to not have a license agreement..

Anyway all that asside, my 1080ti has a thermaltake block on it, i got it because its well the only block i could find for a 1080ti asus strix except 2 other companies and this one the only one that had RGB on it, and the RGB syncs with the 10 thermaltake fans and controllers i have. The only thing i HATED about this block was the thing has a metal plate in the front. The acrylic or whatever plastic they are using today goes over some of the power junk and so it had to be hollow with O rings and a metal plate was put over top.. This allows liquid to flow overtop whatever asus put in there and to the VRMS or Mosfets.. The problem is the 3 brands i found all had this metal plate.. Why couldnt they have used a acrylic plate ??? Maybe because it would have to be too thin and that would risk cracking or something.. i have no idea..

So i purchased it unable to find one that was clear.. I just had a few drinks and fired up the pc and somehow i came across a Bitspower 1080ti asus strix block... It has that plastic plate in the front so you can see the WHOLE block in the front... Thats exactly what i wanted originally.. So frustrating.. Below are the two blocks.. See the metal plate.. its so unsightly... ugly... and i have my gpu vertical.. Im considering... heavily on buying that Bitspower block.. am i insaine to waste $180 for something like this metal plate ? That and well the bitspower has RGB but only 50% of the block while the thermaltake is 80% of the block. And i can control each led to any color i want, the bitspower im not sure if i can do that.. Its probably a 1 color control for the whole strip.. Im just curious what you guys think... Money isnt much of an issue, granted id hate to blow 200$ for something stupid.. I could attempt to re-sell my thermaltake block though... What do you guys think... that plate is just so unsightly or am i just being a drunk idiot lol.

Also should note the thermaltake block itself is one peice.. and the VRM section is big enough to cooldown the VRMs and also for some reason cools down the resistors next to it, the intructions tell you to put the thermal pads on the small rectangle resisters soldered to the board.. The original asus heatsink was this way too, this bitspower block.. is actually two blocks.. the 2nd small strip is for the vrms but it only cools the vrms it doesnt touch the resistors.. I dont see why resistors need to be cooled down but yea its worth noting the differences 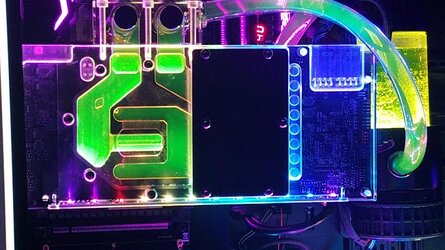 Wow. That's one...noticeable...chunk of metal. I wonder why they did that? Did they think it was needed and Bitspower's engineers are that much better?
OP
C

Yea all the other brands have it too, like EK and two others... But bitspower doesnt.. I looked closer though the bits power is also carved different the flow pattern doesnt look too great.. It flows down, and out the left and right.. and the right is where it flows next.. kinda seems counter productive to flow left and right out of the slits when the liquid exits the right, the way water flows you would think at least i think this would make temps higher as water flows where the least resistance is. The thermaltake block seems like a better design for flow as it flows down and through the slits and out the top and bottom and then meets in the middle to flow right.. but that plate.. uhg

The bitspower one has a plate but its acrylic.. a very thin peice of acrylic.. i wonder if the other brands thought a peice that thin could crack or cause leaks so they used metal since its more rigid. I really want to buy the bitspower one as this block when verticle in the dakr with the lights on, looks like a black square right on the video card lol. But the leds on the bitspower i know wont sync with anything but the video card so itll just have leds that glows solid colors and nothing customized. I suppose i could swap the led strip though..

But 200$ just to give rid of the plate.. uhg i wish i found this block first

i wouldnt go with the bitspower, for design reasons. in my experience the most likely point of failure on any wcing block are the gaskets and o-rings. that bitspower block just has way to many and they look awfully small and thin. i would rather they had gone with a single thick gasket. i trust bitspowers fittings and reservoirs no sweat. but i just cant trust that block.
im not sure why everyone has gone with the metal plate in front. you would think that a block machined out of a solid piece of acrylic or pom and a single copper/nickel cold plate would be plenty strong. they have been making them that way for years. tbh i hadnt noticed them using the metal plates until recently. they must have found some kind of issue like you say and the metal plate somehow stiffens the card up or something.
OP
C

No the plate is a top where the liquid flows.. Thats why your seeing all those gaskets. If you look closely.. The liquid flows over some caps and then to the vrms.. the block cant go through the caps so it goes over them... but to get that to work the acrylic had to be opened and then a plate put over top.. An i making sense ? look more closely at how the actylic.plates and gaskets are placed.

Its something with the non reference pcbs whatever asus or msi ect did they had to redesign the blocks.. Here isa pic of my block.. See how there is 0 metal going from the core to the vrms it has a empty void ? The acrylic acts like a raised bridge to go over the caps the too the little metal block for the vrms.. To do this though the acrylic had to be tunnled open then you put gaskets around it and put a plate on top so liquid can flow through


I hope im making sense here.. The metal plate i think is because a acrylic plate that thin would be kind of weak but bitspower managed it 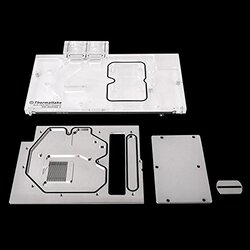 Here is a good picture you csn see why the plate is where it is.. Notice this block has the same thing ? and the clear acrylic plate is the waters backplate..

I got the bitspower block.... Not happy at all with it. The pictures show the block crystal clear and polished.. The clear plate in the front looks like glass.. Its one reason i picked this over getting a replacement from thermaltake. Now im thinking of returning it. It has those machine marks all over the entire block. I understand machine marks in the channles.. But not on the flat surfaces on the acrylic. The plate inside and outside is so foggy it looks white.. The acrylic showing the pcb of the 1080ti is so foggy you cant even see the pcb..

The gaskets like you mentioned max fly are soooo tiny.. Half the size of the thermaltake gaskets. The thermaltake block is clearly better quality by far.. Its polished to crystal clarity everywhere.. Bottom top back front and where the fittings are. The bitspower block was also 30$ more at 200$... The led lights on it are also subpar compared to thermaltake. There are more cooling fins for the gou core on the bitspower though..

If the bitspower was actually polished like they advertised in their pictures i would happily keep it.. But i cant justify this. I have plexi waterblocls from 17 years ago that are better quality and polished to clarity.. there is no excuse this today and not for 200$.

I could attempt to polish it with sandpaper and 3000grit polishing sand paper then plexi polish compound.. but i shouldnt have to do that on a 200$ waterblock


Look at the pics.. first is what bitspower listed it to look like.. polished and like a crystal the rest is what i got.. I showed my friend and mom who was over today and they know nothing about pcs but i didnt even have yo say anything and they said thr bitspower one looked old and foggy and poor quality lol and that says something 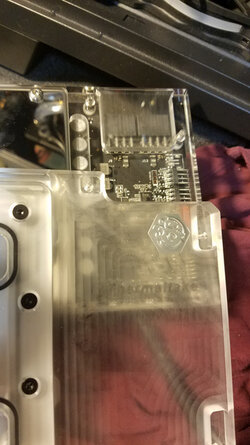 Your solution is easy, just buy a piece of acrylic, use the metal plate from the TT block as a template, drill 6 holes and slap it on the TT block. If you are not comfortable doing that try to find someone who can do it. As for the Bitspower block i would return it, imo its not worth the trouble of you polishing it, nor you should do it for a piece that cost you that much.
OP
C

Oh.. never thought of that... Hrmm.. But with 6 screws is the plexi rigid enough to seal without bending.. BUT i could make the plexi block thicker then the metal plate and just use longer screws.. !! Good idea man i never though of doing that. The only problem with the acrylic is id have to cut/sand to fit inside the slot the metal plate is in. The plate has a slot it fits into it isnt bolted to the top of the main peice if that makes sense ? Ima see if i can buy some acrylic blocks and try this out

Yea im mailing it back to amazon today.. This is unacceptable for a $200 waterblock to be that foggy from the machining process and not polished at all.. You see its plexi cover where the metal one for thermaltake is ? Look how white that is..

I think something like 3 to 5 mm (sorry im european so i use metric) would be just fine, i personally would go with 5mm just to be safe and so the screws wont crack the plexi when tightening the bolts . Dont know how deep is the "groove" (dont know if its the correct term) on the block so it might stick a bit out but it should not be that noticeable since you have the gpu vertical.

I saw how cloudy its was...shame that bitspower is going with some cheap manufacture, their usual products usually are known to have quality but this is not the case. Lets hope they improve.
Last edited: Jul 13, 2018
You must log in or register to reply here.

M
Thermalgrizzly conductonaut LM install on 1080ti: what did I do wrong?
2