Will high idle temps hurt anything?

Okay, so i've got my card basically like i want it. Quiet at idle, and not too loud under load. One thing that i want to make sure of before i stop worrying about it.

It's idling at 53 to 55C (depending on the time of the day), and under load it's 56 to 58 C. Will it idling that high hurt anything, or will it be fine? It's idling there because the fan is off. Not on low, it's flat out off. It spikes up to 63 when i drop a huge load on it, but then it cools off to 58 once the fan gets itself together. Will that hurt anything?

My card's fan is just a little off balance, and so at lower speeds i can hear it clearly. High speeds are fine, it's just simply loud. So that's why i have it set to be off since i don't feel like rmaing another 4850.

So anyway, should i be worried about the temps, or just leave it alone? 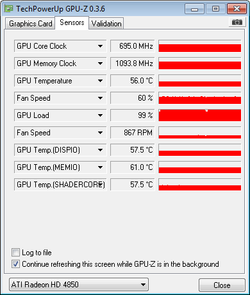 I wouldn't say it will hurt anything. Some people will argue it could shorten the life of the GPU, which it probably will but by the time it craps out it will be historic anyway. Just bear in mind that the excess heat will be warming up the rest of your system so make sure you have good case airflow.
OP

I plan to replace it in about 2 years anyway, so i doubt it'll die before i get rid of it...

The case temps are pretty close to ambient, (antec 900 FTW) so i'm not really too worried about that. Just wanting to make sure i'm not going to kill my new card lol

No chance of killing your card at those temps. Good choice on the case btw Thinking of getting one of them for my fileserver.
OP

Yay! lol I'm sick of running in circles with this thing. Thought about backing off to stock a few times lol

And it's a really nice case. Nice and quiet, and really good airflow. Haven't had any issues at all with it, and i might even use it for my next build if i don't scratch it up too bad. (It has really durable paint on the outside, so i don't think that'll happen)

Not a problem at all.

If you aren't worried about the ambient temps rising in the system from the warmer idle card and your airflow is constant enough to keep the idle temperature consistent, you'll be more than ok.

My 4890 locks up while installing windows in 30c ambients..

But it still works just fine

If you aren't worried about the ambient temps rising in the system from the warmer idle card and your airflow is constant enough to keep the idle temperature consistent, you'll be more than ok.
Click to expand...

The fan comes on at 50% as soon as it hits 55C. For ever 1C that it increases, it goes up 5% fan speed for 6 steps. Then if it keeps heating up, when it hits 80C the fan goes straight to max. I just have it off at idle as the hum really annoys me lol
You must log in or register to reply here.