Windows 10 Random Crashes even after "Reset this PC"

nfinity said:
Just wondering, if this has happened again since... if so, how many undesired reboots are you at now would you say? Could try running Windows Memory Diagnostic just to make sure that comes back clean.
Click to expand...

In a day I can anywhere from 1 to 5 reboots. The strange thing is it doesn't seem to happen when doing within a particular time frame or when I am doing a specific thing. I mainly play games and browse the net so it's mainly happening while I game. But it has happened when I was on the net and doing other stuff. I also ran Windows Memory Diagnostic a couple of times, and it found no errors.

So it crashes/reboots MOSTLY when you put load on the system ?
OP

Kenrou said:
So it crashes/reboots MOSTLY when you put load on the system ?
Click to expand...

Yea I guess...but I would think there's a big difference in load when it comes to browsing the net vs playing games.

Have you checked your browsers for mining trojans? Only reason I ask is I picked one up last year-no idea where or how-and it used a lot of system resources when a browser was open.
OP

Alaric said:
Have you checked your browsers for mining trojans? Only reason I ask is I picked one up last year-no idea where or how-and it used a lot of system resources when a browser was open.
Click to expand...

I think this issue is something to do with my CPU or Windows. Maybe my overclock is failing...this is the first system I have overclocked and it's held up for 7 years. Do you have much experience in overclocking?
Have you had to modify the overclock over a long period of time? If it's not the CPU I think it's Windows. But what I don't get is why I get crashes after using the "Reset this PC" feature which reinstalls Windows. But perhaps I should do a full format and reinstall Windows from disk?
Also, it seems a PCIe timeout can cause this error...but there is no way I can test this because my motherboard doesn't even have onboard graphics
Last edited: Feb 2, 2020

Overclocks can degrade over time, requiring more voltage for the same clock speeds. I don't have much experience on the Intel side of things besides my current CPU, and it's been running OC'd since I put it in, but that's only three years. If you have some voltage headroom left you could try going up .05 DCV and see if it helps. If you don't have the headroom (cooling or chip parameters), the inverse would be dropping your clock speed 100 MHz or so and try that.
OP

I have started getting this bluescreen error now...not sure if it's related to the other crashes. I'm don't even know if it's the same thing causing all these issues anymore. Because as I mentioned on my first comment, in the original crash my display would turn off and nothing would respond but for some reason, "the audio" of what I was watching or playing would continue to play for a while.
Apparently this could be related to PCIe timeout...so now I don't know if its's my Motherboard, CPU, RAM or Windows...it could be anything.
Do you know an answer to my question about reinstalling Windows with a full format?

Here is the bluescreen: 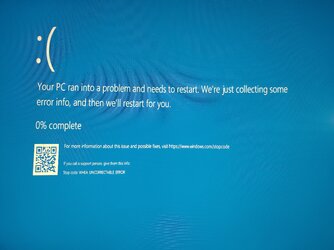 To the best of my knowledge a format and clean install is more complete than a reset. At this point it can't hurt, right?

From a troubleshooting standpoint a clean install will answer a lot of questions about hardware VS software. From a "I want to learn about how my OS functions" standpoint, a case can be made for a reset.

I personally would opt for a complete reinstall (after grabbing any files you may want to keep). It really comes down to how much time you want to throw at it.

A more middle of the road option for ruling out the hardware would be to make a Linux Live USB. https://www.fosslinux.com/274/how-to-create-linux-mint-live-usb-drive-on-windows.htm
You can hold off on a Windows reinstall, and see if the crashes continue inside Linux. If they do you are one step closer to blaming hardware over software.

Don't worry, the whole OS runs from the USB stick and doesn't kill anything on your current drive unless you ask it to. And who knows, you might like Mint and decide to scrap Windows for good (as it deserves )

Good suggestion, knoober. But Linux will likely put less load on hardware components so it may not eliminate all possibility of hardware problems.

trents said:
Linux will likely put less load on hardware components so it may not eliminate all possibility of hardware problems.
Click to expand...

I agree. I have had video cards that wouldn't even run with the Windows default driver run dual monitors under Linux. If the crashes stop, I would try stressing the system with mprime (prime95). Not sure what a gpu stress test would be off the top of my head, but I'm pretty sure it can be found easily if the OP decides to go down that road.
OP

Thanks knoober I will definitely try that before doing a clean install. I was a bit worried about actually doing a clean install because I have changed some hardware in my PC since the installation and I wasn't sure if my key will work. I heard windows link the key to your PC so I'm not sure if it will think I'm trying the key on another PC.
Oh yea I been hearing good things about Linux for a long time. Unfortunately, I use my PC for gaming at least 50% of the time.

To the best of my knowledge, Windows 10 ties the key to the motherboard. Due to the slower than expected adoption rates for the new OS M$ has been pretty liberal about that sort of thing. Apparently resistance is not futile. LOL

I try to actively avoid pushing anyone towards Linux, but it sure seems like half the stuff I say doesn't reflect that at all. I kind of figure anyone that wants to be is already using it, but if gaming is all that's keeping you away.... look into PopOS and Manjaro. They've ironed out a lot of the issues for gamers out of the box.

That said, Linux is still a fine diagnostic tool when it needs to be and there are even distros built around it. Mint is kind of a default to suggest because it is easy to use but https://www.overclockers.com/forums...with-Porteus-Linux-Released?highlight=porteus has already been loaded with all the stressing tools you might need. Pretty handy for testing ram overclocks without borking your actual OS. Might be good for your purposes too

That would be useful. I use a separate boot drive for RAM OC. Once I get it stable I go back to my main OS. RAM overclocking can wreck your OS with a quickness. The worst part is you don't know until you try to reboot it and get the boot error. I learned that with XP. I learned a lot with XP. The install disc lived in my DVD/ROM drive. LOL
OP

Linux Mint seems to have 3 editions with different "desktops" Do you know which one I should get?
The options are Cinnamon, MATE and Xfce.

The desktop is just how it looks. If it was a car it would be kind of like trim packages. Differentish features on the interior of the car but same engine under the hood. Mate will probably feel pretty snappy because it is designed to be a middle ground between eye candy and functionality. Cinnamon has many bells and whistles and is supposed to be comfortable for Windows users. XFCE is (IMHO) just plain homely, but also designed to be the fastest/lightest weight. XFCE is intended to breathe new life into old as dirt hardware, but still works just fine on modern stuff. As I alluded to earlier, the underlying OS is exactly the same. The DE is just what you want it to look like. Try them all and see which you like best or pick any random one.

So I started using Cinnamon and it's actually very clean and easy to get used to. But I there is a huge issue with Flash because videos play at like 10fps.
I have looked around for solutions, and none of them worked. Except for downloading the Flash file on the PC and playing it locally. Do you face the same issue or know a fix?

Also, I wasn't able to replicate the crash, which makes me think it's Windows.
But this crash is so random...even in Windows I could sometimes play a game like AC Odyssey which seems to use 100% CPU according to the Microsoft "game bar" for like 4-5 hours with absolutely no issue.
But sometimes it will crash a few minutes into watching a YouTube video. The thing I find strange is, and I mentioned this before when it crashes watching the videos sometimes the audio will keep playing even though my display is off and the PC is unresponsive. Even if I click the power button the PC will not start shutting down, but the audio will keep playing. (not sure how long it will keep playing but at least about a minute)

I've never noticed any problems with flash but I'm not sure I use any flash content. Since flash is suck a known security concern, it wouldn't surprise me if there is some sort of default-disabled status for flash (or something). I will do a quick search and post back if I find anything in that states flash is auto-disabled/limited.

contains information about how to test your gpu. The section that talks about glxgears mentions that reduced framerate could be a sign of a failing gpu and how to test for it. FYI, Mint is Ubuntu/Debian based so as a rule of thumb, you can branch out into articles about this OS for fixes.

https://www.tecmint.com/linux-cpu-load-stress-test-with-stress-ng-tool/
the above link will show you how to use a program called 'stress' for the cpu but if you prefer prime95, then you can get a package called mprime from the mint package manager.
OP

Thanks for the info. If you don't use Flash it means you don't watch any videos online. Because YouTube and pretty much everything else that streams video is flash.
And Flash is definitely not disabled. It's working but it just runs really slow.
You must log in or register to reply here.

Display cuts randomly and PC crashes but stays powered on

Screen turns off after Windows update