Now you just have new junk for a PSU.

What's your take on the thermaltake smart 500. I have that in my other gaming computer running the rx570 gpu. Should I grab one of those for this later?

It's serviceable. Likely better than the potato for temporary use!

OK, so while Earthdog and I review many different components here at Overclockers, PSU's are not one of them. The complexity and equipment needed to do a 'proper' review is far more than you might imagine. I won't bash a product I haven't seen or 'touched' (unlike Erthdog apparently lol), still, there are some concerning factors on that Aresgame PSU. Let me point them out, and if it's not too late, maybe convince you to return it for a different product that is in the same price point.

2. The combination Molex and Sata cables - Molex and Sata have completely different power draws. A single Molex cable can pull a maximum of 156W per cable (hence my concern earlier with your Molex to PCIe adapter) while a single Sata cable can pull a max of 54W per cable. At best, and I hope this is the case, they added Sata plugs to the Molex cable (this is fine). At worst they added the Molex to a Sata cable. This creates an obvious fire hazard. EDIT: Adding Source

3. Sata hard wired in - For some odd reason they decided to hard wire a sata connector in alongside the 20+4 connector. While this isn't nearly as concerning as my first 2 points it is...odd. Every other semi modular PSU I have ever seen only has the 20+4 pin hard wired. It would make sense to hard wire an EPS12v CPU connector, but a sata? It's just confusing. The most likely scenario I can think of is this is the cheapest way to produce a product that they could rate as a 650W.


TL;DR If it's not to late to return that power supply I would. This is the one I would get and it's only $45 at Amazon.

Haha, ok I'll end up getting either a cx550 or 650. Unless someone has something they wanna sell but this isn't the right area on forum to buy/sell.

Like I said that computer is light gaming and will build a better one when the time comes. Bill's are better than games to pay first
OP
D

E_d and blaylock thank you. I will keep this in here for now and use it.
I will get the corsair cx650 in maybe a month or so. Will keep this as a backup PSU.

I'm not big into buying junk parts but as for a backup PSU I see it is running the hd7970 well for now so it will work as a backup incase a PSU goes out and can use for temp use. Remember this is an old computer with old tech in it hehe.

Sometimes you don't need to read a review to know a PSU is likely gaaaaahbage. Would I bet my life on it? No... however, I would have bought a known decent PSU to test if my current PSU is junk. Maybe that's just me?

Here's why I judged it to be bleh. Between the price, lack of a known brand, output on the 12V rail less than most other modern PSUs (a 650W PSU typically has ~650W for the 12V rail), not significantly less). Also, I don't see that it has a UL number. I was looking for that specifically so I can cross-reference the OEM. UL#, I thought, were required to sell in the US market. Maybe it's decent/serviceable... I don't know for sure. But there are enough red flags for me to avoid such a unit.

"Underwriters Laboratories, an independent firm working with product safety certification, has been active in the field of product testing and preparation of safety standards for more than a century. UL evaluates more than 19 000 types of products, components, materials and systems annually. Every year more than 20 billion UL marks are placed on products from 66 000 different manufacturers. The UL Group and its network of service providers include 68 testing and certification labs worldwide, serving customers in 102 countries."--From the About UL page at ul.com

Essentially, this means that all PSUs sold on the North American market must be marked with a UL number. This number should identify the actual manufacturer of a product. However, not every PSU has such a number. UL number omission on a North American product might indicate poor quality.
Click to expand...

RE: The SATA/molex. I had no idea that's a problem. I guess the device on the end of the SATA port can overdraw...? Is that the issue? Are SATA cables/power connectors themselves limited in the first place? I don't know too much about how electricity works, but, I'd imagine that a molex device inline with SATA isn't sending the SATA plug the same power that the molex is drawing?? You shouldn't use SATA to molex adapters because of power draw, but I'm not sure that's a bad thing, natviely, on cable(?).

EDIT: CX650 is a serviceable, inexpensive PSU. It isn't good/great, but is likely better than the PSU you currently have.

EDIT3: I did even more digging and probably should have stopped. lol. Rumor has it that it's a group-regulated design. So the 12V and 5V are combined, essentially. Load one up considerably, the other can't output what it's supposed to. They are an OEM who makes PSUs for some it seems. But who, and what, I haven't found.
Last edited: May 17, 2021

I'm actually questioning my post about the sata/molex power limits. I added a source to my above link. It's no longer relevant to this post so I'll start a new thread on it, but wanted to add this and the source for future searches.

Here's the problem - This little chip. Says that it was made in Japan, It's plain junk. DOC -> In the FUTURE all the good stuff (S**T) is made in Japan

Here's a Pic of the Label from the Aresgamer 500w and a EVGA 1000w PSU. Notice the difference in Certification labeling. Also the UL cert is known/has been faked by low end companies. These Certifications are not free and are paid by the company requesting/requiring one. 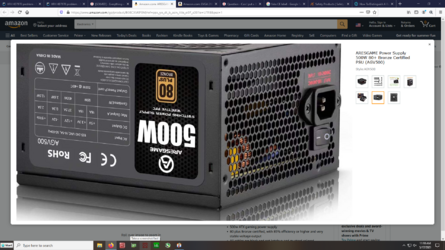 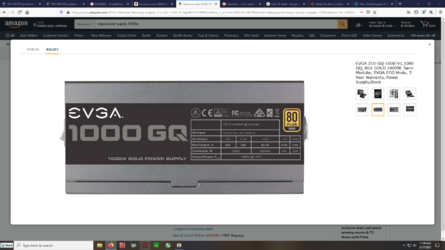 lol but he has a point most of the TT psu have been bashed in review testing for a while
You must log in or register to reply here.