October 8th was the release date for some embargos for the new Z390 chipset. And with this date coming and going we saw the major board partners show off most/all of their new lineups. With this brings new naming conventions, new looks, and new features on the motherboards. We'll list the boards from each partner along with any high-level features.
Click to expand...

MMMM That ASRock Phantom Gaming ITX/ac is sexy as hell!

Asus boards are stupid expensive on the high end. How many bloody versions do you need? EVGA dark is pretty sinister. I like the dual 22110's but kind of wasted with that chipset.

Only question I have is it says that the z390 Dark has 4 slots? I thought it only has two?

Updated with a lot of pre-order links

Tin says he is working on an overclocking guide for it.

Looks like one of, potentially, the best overclocking boards I've seen in a LONG time.

Only question I have is it says that the z390 Dark has 4 slots? I thought it only has two?
Click to expand...

LMK if anyone else sees any discrepancies.
Last edited: Oct 10, 2018
W

I like 2x M.2 sockets on this board. From earlier series I don't remember other ITX boards with 2x M.2 except Supermicro Z370.
Maybe will test my board during the weekend. Right now I have to finish some other tests. For sure I'm counting on high memory clock. ASRock sent me unofficial beta for this board, no idea what it improves over initial BIOS.

Out of curiosity what similar issues? I've heard nothing but praise about the x299 Dark.
W

I mean overall EVGA mobos, not only Dark series. In general problems with BIOS, problems with memory support and OC, some weird stability issues. Pretty much the same issues, mostly related to BIOS, were repeating in most EVGA motherboards since I remember. Good OC results were mostly on special BIOS releases used by overclockers related to EVGA like Vince. I don't think anyone else had really good results on these boards. You can check even our frontpage reviews. I remember that with last mobo were the same problems because of not so good BIOS.
This is also one of the main reasons why you don't see EVGA mobos in competitive OC benching. Even Vince who works in EVGA, multiple times used competitive motherboards if he wanted to break some records. If lower clock but more CPU cores are better option then he always uses EVGA mobos, but many of his results are not on retail products. Many are additionally modified for extreme benching and the same is with graphics cards.
Last edited: Oct 11, 2018

Woomack said:
I like 2x M.2 sockets on this board. From earlier series I don't remember other ITX boards with 2x M.2 except Supermicro Z370.
Maybe will test my board during the weekend. Right now I have to finish some other tests. For sure I'm counting on high memory clock. ASRock sent me unofficial beta for this board, no idea what it improves over initial BIOS.

Asus Rog Strix did and I'm pretty sure Gigabyte had one too but don't quote me on that. The Strix is the one I was considering getting.
W

Probably yes, don't really want to browse the web right now but from first available series of ITX Z370, I remember that only Supermicro had 2x M.2. Later were released other boards but I wasn't following all product lists. Anyway, if ASRock Z390 ITX will OC as I wish then will be good to replace MSI Z370 ITX. There is nothing wrong with MSI but ASRock simply offers some more. I only count I will find some time during the weekend.

Here is one photo: 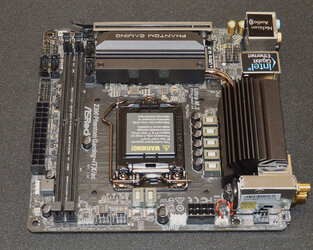 Iirc, there were at least 2 with multiple m.2 in itx ff.
W

I'm testing ASRock Z390 Phantom Gaming ITX/ac right now so if there are any questions then I guess I can answer them.

Motherboard has initial BIOS 1.10. I have no idea how it works as I updated it to L1.23 beta after first boot. The only official version available is 1.20 which supports all processors. If I'm right then 1.10 had no 9th gen support. There is also L1.26 beta but I can't see any difference between this version and the L1.23.

One more interesting thing, in BIOS are many additional voltages like only for PLL are 5 different settings. There are also voltages to pass cold bug while benching on LN2, separately for CPU and IMC/memory. This is acutally a surprise for me as I wouldn't think this mobo was designed for benching on LN2.

Assuming that you are correct I'm pretty surprised that a Z390 wouldn't have 9th gen support from initial BIOS since that chipset was purpose build for 9th gen.

Also, DDR4-4500 out of the box is pretty fantastic. I may need to upgrade sooner than later.
You must log in or register to reply here.