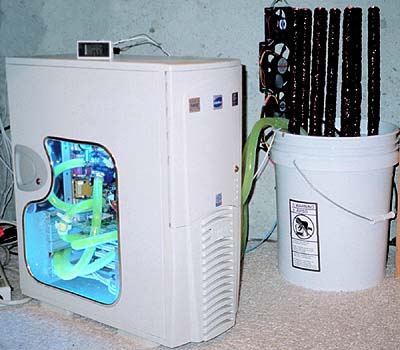 This is a project for anyone looking for a completely silent and cheap evaporative cooling setup.

The 2 reasons I first got into watercooling were silence and for something new to play with. It didn’t make sense to me to set all this stuff up and then have one or two 55 db fans on the heatercore.

My original setup consisted of CPU & NB blocks running to a heatercore with one 120mm fan @ 5v with a shroud, then to a 20 ft, ½ inch copper coil submersed in a 5 gallon bucket. My computer is in my basement, which stays fairly cool at around 17-18,C.

In this setup, my heatercore would knock off the first bit of heat and the bucket coil would take out the rest. The bucket water just sitting there stagnant, never rising above 21 C, and the water in my cooling loop is only 0.5 – 1.0 C higher than the bucket water temp. My CPU temp is approximately 11 C higher than my cooling loop water at idle, so I was getting some pretty good temps.

This worked great until I added a GPU block with a peltier. My bucket water shot up to 28 degrees! This meant I was getting close to 40 C idle temps on my CPU – totally unacceptable. I had to figure a way to cool the bucket water.

I looked into bongs and although efficient at cooling, they can be noisy and expensive. I put out a question in the forums and got a response from Volenti. In his setup, he has about 28 one foot vertical pipes wrapped in chamois material at the end of his cooling loop. He also has an Iwaki MD20RZ that is able to push water up all those pipes and through his system.

I really liked the idea but I wanted to keep the cooling loop water separate from the bucket water (to keep my Water Wetter at the correct ratio and to keep dust, etc., out of my blocks.) So I borrowed from Volenti’s idea and this is what I came up with. 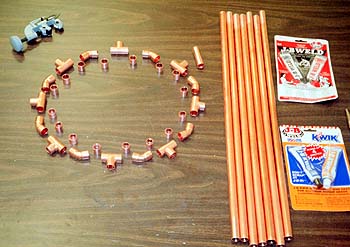 My total cost for these was about $17. The rest of this stuff I had already:

What I did was “weld” the small pieces of tubing into the T-fittings with JB Kwik, wait about 5 minutes, then “weld” the T-fittings to the 45 degree elbows leaving a very slight gap between the T and the elbow. You can vary the spacing depending on how large you want the ring.

Once it is all put together in a ring, insert the 2 ft tubes in to make sure they are all pointing straight up. I used a level on a couple, then eyeballed the rest. The JB Kwik will allow you to manipulate the angles a little while still holding the tubing up. I let this set for about 20 minutes, then I removed the 2 foot tubes and JB Kwik’ed them in also.

After it was all put together, I went back over all the joints with JB Weld. The JB Weld stays pretty runny for about 4 hours, so I had to keep flipping the whole thing over every 15-20 minutes for the first few hours to keep the epoxy from pooling on the top or bottom.

A better idea might have been to mix the JB Weld and let it sit for an hour or so before applying. I let this dry overnight before doing anything else.

One important thing I found, after building my prototype, is that you’ll should have all 7 pipes at exactly the same height. A slight variation will strongly influence which pipes get the most water. There doesn’t seem to be much, if any, difference in flow based on the location of the pipe to the pump feed.

The next step is to wrap each pipe with some sort of absorbent material. This is to provide more surface area, to slow the waters fall and to provide a quiet transition into the bucket water. I used a fairly plush bath towel cut into approximately 2 inch strips. I tried sewing the first few on, then resorted to zip ties – the sewing was taking too long.

With my first version where I had 5 vertical pipes, I had to cover the tops with a piece of towel because the water was flowing too fast and splashing a little. I found that with 7 and this particular pump, you don’t need anything on the top. This pump could probably push through 10 – 2 footers but I couldn’t find any 36 degree elbows.

Just make sure the bottom of the towel is below water level or it might drip instead of flow silently into the bucket. Here is a picture of the 20 foot coil wrapped around the tower: 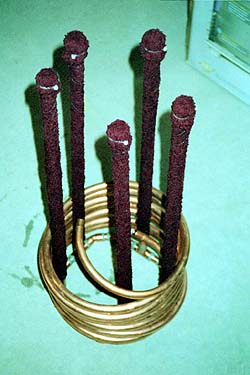 After it was all put together, I hooked it up to the pump and tested it in the sink. I wanted to make sure it would push the water up and that it did not leak out of any of the joints. Good flow and no leaks, so I hooked it up into my system. Even with the extra 11 watts the pump added, my bucket water temp dropped from 28C to 23C – this was with no fans. 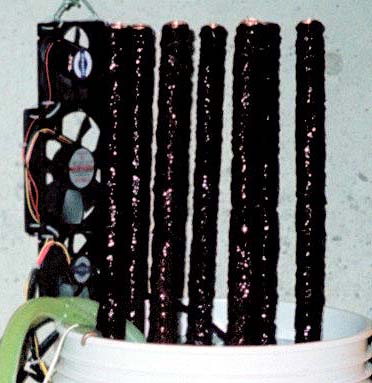 My bucket temps now max out at 19 C and the water in my loop is 19.5 – 20.0 C. This is 2 degrees below my original setup temps with no pelt or submersed pump, and 9 degrees better than the new setup without the fountain.

And completely silent! Not bad for 17 bucks. If you have a strong enough pump, you could use this as a reservoir at the end of your loop.

My next project is to come up with some sort of shroud for this. There seems to be a lot of wasted air on the top and sides. Maybe next week. Thanks to Volenti for the idea!

In this story, you will learn how the new, but bad Arcticooler did. As you might know, there was a bad batch of them, but I got a good, working cooler. I also tested the Alpha PAL6035 along with it

Heatsink Improv: A Small Tribute to Overclockers of Old

Ever need a heatsink to cool that power hungry beast of yours? Is the stock cooling horrible and your GPU is without any good after market solutions? If so, then improvise. Jury rig that incompatible GPU cooler, find an unused CPU cooler you have tucked away, or even go all out and buy a CPU cooler for your GPU if there are no GPU specific solutions. No, I haven’t lost my mind. This is just what runs through the mind of a bencher who is trying to squeeze every last drop of performance out of his GPU, but has no budget for extreme cooling.