A couple of adequate performers in the bunch. — Joe 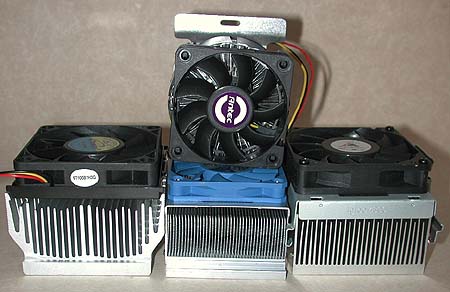 I have some PIV heatsinks that manufacturers have kindly send for testing. I do not have a PIV system (and won’t until things get more reasonable), so I modified the CPU Die Simulator to accept PIV heatsinks for testing. The relative rankings should be used by readers for purchase decisions.

All the heatsinks are aluminum – no copper cores etc. All were tested as shipped with the exception that all thermal interface materials were removed and Arctic Silver used instead. All were relatively quiet – no 7000 rpm Delta screamers in this bunch (dBA measured 8″ from fan intake with Radio Shack Sound Meter): 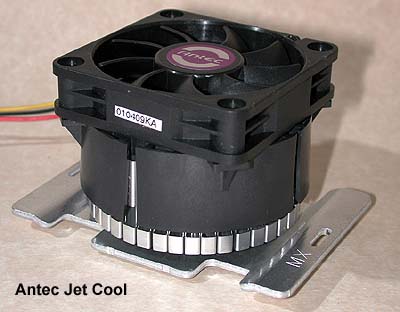 The Antec is one of the more interesting designs which we covered in some detail HERE. 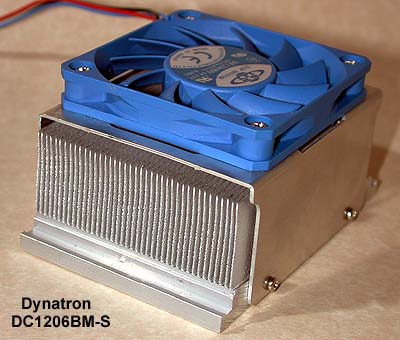 The Dynatron has the highest fin density using a manufacturing technique called “skiving”. This literally shaves the fins from the base, like peeling veneer from a log. As such, there is no solder joint between the fins and base.

While surface area is very important to performance, so is airflow through the heatsink. With fins this dense, airflow does become a key performance factor and at some point density limits airflow, detracting from performance – an interesting design challenge. 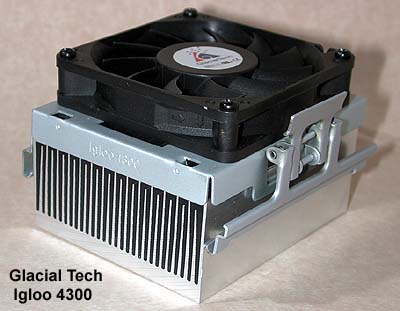 The Glacial Tech is a fairly conventional extrusion, although the tapered fins are not commonly seen on other designs. There are performance advantages to this design over untapered fins. The clip is called a “Flip Clip ™” and is an articulated hinge design – easy on and off. 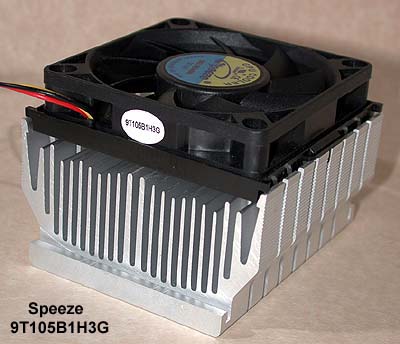 The Speeze is a conventional extrusion design. The fins are the thickest of the four with lots of spacing, resulting in high airflow through the heatsink. There is always a tradeoff between fin density and airflow through any heatsink, with the Speeze electing for higher airflow and lower fin density.

All heatsinks were tested on the CPU Die Simulator which gives results that are unaffected by motherboard influences. Each was tested at 75.6 watts. Each came with thermal interfaces of varying kinds, which was removed; Arctic Silver II was used for all tests.

The C/Ws are representative of potential on-die performance, although the interaction of the heatsink with motherboard heatpaths will modify each user’s results somewhat. Relative C/W ranking is more pertinent than absolute numbers.

Fairly tight grouping excluding the Antec. Interestingly, the Dynatron and Glacial Tech perform at the same levels despite very different technologies. The Antec is substantially behind the other three, due I think to poor heat transfer from the aluminum core to the surrounding fins.

Of the four tested, the top three will do an adequate cooling job.

Thanks again to Antec, Dynatron, Glacial Tech and Speeze for sending these our way to test out – interesting and varied designs.

I used to be involved in the manufacture of Acousto-Optic devices for use within high power laser cavities. One of the products was called a Q switch. It was basically a piece of quartz with polished ends through which the