Last year, I decided that my old computer needed an update. It was a Celeron 400 on an Intel 810 board and was getting quite cumbersome in most of my apps. After a few weeks of research, I found out about overclocking and decided I should do a lot of research before buying my new system.

After much looking, I decided on a Duron 700 on an Asus A7V133. I ordered an Alpha PEP66 to go with my new system, but decided to go with a Sunon high output fan on it.

After getting everything installed I was very impressed with my little Duron that hit a GIG without any trouble at all, but my temperatures were just too high for my liking, peaking at over 50 degrees Celsius. I tried all combinations of fans, but none met my criteria of keeping it below 45 C.

I thought long and hard and decided that I wanted to do a watercooling setup.

Although my first attempt with a modified heat sink was okay and kept my temps below 47 C most of the time, I thought that it just wasn’t good enough. I went out to a local machine shop and got a block of copper that measured 1.5″ by 3″ by a little over ¾”. I was going to drill it myself, but I just couldn’t find anyone that would let me use their drill press for this purpose, so I went back to the machine shop and cut a deal with the owner.

I would trade my computer expertise for some mill work. I thought about having him mill a maze out of it, but I wanted to end up with something that I COULD have done on my own. Here is my final design.

For some reason the digital camera lost all of my pictures of taking the waterblock from a chunk of copper with holes in it to this. 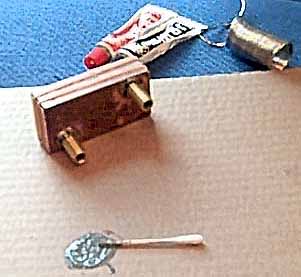 What I did was to take the brass barbs and cut off the majority of one end so that they sat in the holes nicely. I then put the block on one of the burners on the stove (wish I had the pic of this!!!). I turned up the temp to 8 and applied a rim of solder around the perimeter of the barbs.

Let me tell you, it was HOT over the burner.

This is not for the faint of heart and could probably have been done with JB weld, but I wanted a very strong joint. Since there was little surface area to stick to, I decide it to be best to use the solder.

I then cut some strips out of a sheet of copper that I bought at a hardware store and JB Welded them to the sides that had holes. I found that a cut off Q-Tip worked well for this. I applied rubber bands around the block to keep them in place while this dried. Twelve hours later, I tested for leaks – there were none.

I had planned on making a couple of planks to secure the block to the holes in the motherboard, but the block was too big. To solve this, I used some copper strips again.

I cut two identical ones for the top and bent them at the edges to match the socket and JB welded them together (god – I love this stuff!) I then carefully cut out notches in two square pieces of the copper to go over all three of the notches on the socket. JB weld to the rescue again for attaching them to the strips that I had bent.

After test fitting it, I let it dry for another 12 hours. After waking up, I carefully drilled a hole in the top to exactly match the center of my little Duron’s core. Here is a pic of this stage. 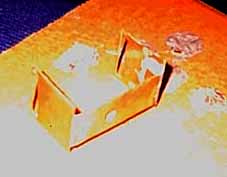 After JB welding a nut on top of the hole and a washer onto the waterblock to prevent accidental slipping, it was time for a little lapping. 220, 340, 400, 600, and 1500 grit sandpaper were used on top of a mirror. I used some Arctic thermal on the final lap to get it that much finer. Here is a good pic that shows the reflection of my A7V133. 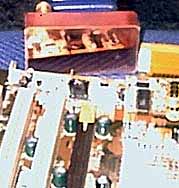 Okay, time for a test! 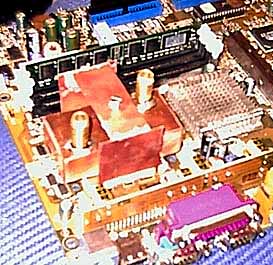 Yes! It dropped my temps by 3 to 5 degrees! I have no real means of measuring any temps besides my CPU, so other variables could be involved. 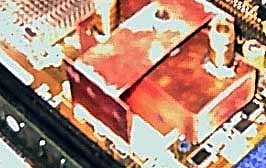 Still not satisfied with my heater core as a radiator, I went to work on an evaporative cooling tower (bong). I used a one gallon glass jug at the bottom attached to a clean out with (you guessed it) JB weld. I had to use a little rust prevention on the lid that I cut out, so I applied some putty to every area exposed to water and made a gasket out of it.

I’m using a Pondmaster pump that is supposed to pump up to six feet high at 140 GPH. I used a common rainmaker showerhead with all of the crap removed from the inside. JB weld was again used to attach a hose barb to a piece of plastic pipe I had laying around that threaded nicely onto the showerhead.

I cut a piece of 4″ pipe to about 15″ (still haven’t measured it). An end cap was drilled to accept the plastic pipe with the showerhead and then drilled some more for air holes. The pipe fit in so tightly that I don’t even use anything to hold it in!

After reading the desktop cooling tower article, I thought that Scotch Bright pads would be excellent for catching the stray drops of water. I cut an “X” in the middle of one and trimmed it to fit the cap. The pad was then inserted, and through it went the showerhead assembly. 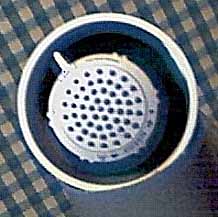 To reduce noise, I cut a sponge that goes right at the bottom of the PVC clean-out before the reservoir, and then more inside the reservoir. A hose barb was installed in the side of the clean-out and a hose ran to the pump. I installed my 92 mm Sunon to the side and a-testing I went. 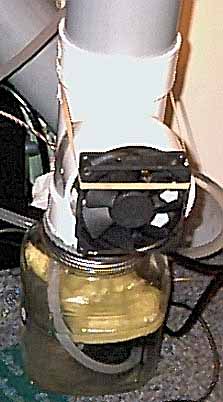 I now never see anything over 44 C, which seemed a little high to me until I found out that ASUS temperature probes read 7 to 10 degrees too hot. All in all, I’d have to say that this project was a lot of fun, and on top of that my system is now completely stable at 1024 MHz. I’m anxious to do my next project that will be the infamous voltage mod. I know my little Duron can get to 1100 MHz.

In conclusion, I hope that this demonstrates that watercooling offers many options for a creative mind to explore. Whether you’re into style or practicality, a great deal of satisfaction can be gained from this sort of project.

I have known Tom for about a year and he is an avid overclocker and developer of peltier cooling solutions. He has spent a lot of time getting his peltier heatsink just right and sent me one to review. As

Last week, EK Water Blocks released what they are calling the most extreme fan to date with their EK-Furious Meltemi 120. Marketed for the higher-performance cooling needs, these 38mm thick fans may just be what you need.

ED NOTE: This article is 5 pages long. Those of you running peltier cooled T-Bird rigs are probably aware that you are pushing the limits of standard water cooling methods. Many vendors claim their coolers are capable of “handling” several