At Computex 2015, G.SKill hosted the 4th annual OC World Record Stage event where new overclocking world records were set. G.Skill sent along the following press release with all the details of the event and a list of what records were achieved.

During the five days of Computex 2015, G.SKILL organized and hosted the 4th Annual OC World Record Stage with the participation from 14 of the world’s top overclockers representing the top five major motherboard brands. Each day, different systems would be overclocked under liquid nitrogen to push their limits in front of a live audience. Check out the video below for an overview of the live event:

We would like to thank to the 14 professional overclockers from different countries around the world, and the five world’s leading motherboard venders, including ASUS, ASRock, EVGA, GIGABYTE, and MSI. With the skill of overclocking with extreme LN2 and the best products from each of the vendors, people around the world are able to witness not only the performance of next generation hardware, but also the incredible overclocking potential of the latest and newest products. Even with the end of Computex 2015, these overclockers continued to persevere and break records in the following week of the event, producing further results.

The details of 18 overclocking records can be found below. 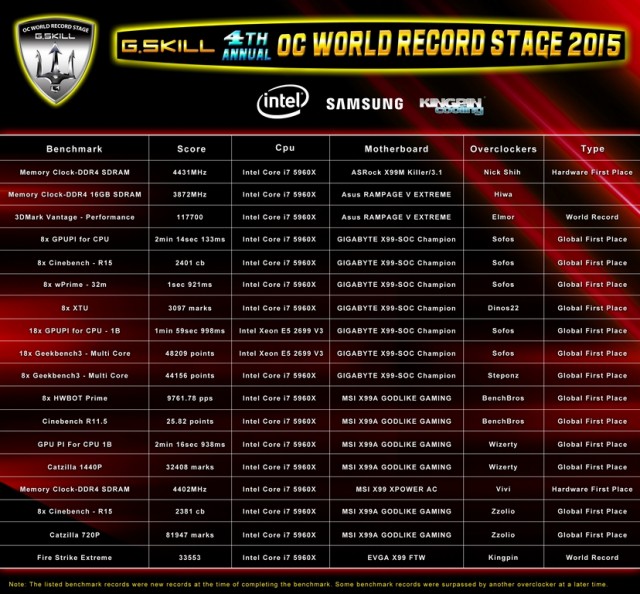 G.Skill just announced an expansion to their mechanical gaming keyboard family. The Ripjaws KM780R RGB and MX models are revised versions of their very successful KM780 series keyboards and features everything you already love about the original minus the extra gaming keycaps, puller tool, and keycap box. Because G.Skill is not including these accessories in the re-release they are able to reduce the price.

G.Skill has been around for 25 years now, and since their inception have brought performance memory products to the PC enthusiast crowd. With the release of the Intel X99 chipset, and the accompanying need for DDR4 memory, G.Skill has their initial product offerings available in the form of their Ripjaws 4 series. They sent along their DDR4 3000 MHz 4X4 GB kit for us to have a look at today, which just happens to be the same kit we used for the Intel Haswell-E i7 5960X review.