As you’re probably aware from reading our recent news release, G.Skill has announced two new lines of memory designed to work seamlessly with the new 6th Generation Intel Core (Skylake) processors. New for the Skylake platform are the DDR4 Ripjaws V and Trident Z series, with a kit from the Ripjaws V family on tap for review today. The kit we have is rated for 3600 MHz, which is a pretty impressive out-of-box speed. G.Skill has been well known for their high-quality and enthusiast-driven memory products for quite some time now, so let’s go see if this kit can hold up that tradition.

Here are the specifications we pieced together from the package, CPU-Z, and the SPD information from the motherboard’s BIOS. The kit is advertised to run at DDR4-3600 MHz with timings of 17-18-18-38-2N. Although the kit is designed with the Skylake/Z170 platform in mind, I doubt there would be any issues with it working on the X99 platform. Many of the Ripjaws V and Trident Z kits are available in four module kits, which you’ll need to utilize the X99 platform’s Quad-channel capabilities. The four module kits are ideal for populating all four memory slots on Z170 chipset motherboards as well. As is typical with high-speed DDR4 memory, the voltage needed to run this kit is 1.35 V. Intel’s Extreme Memory Profile 2.0 is fully supported, but choose your motherboard wisely because not all of them will support memory at 3600 MHz.

Below the specifications table are all the available Ripjaws V and Trident Z kits, along with timing information on a few of the higher speed offerings.

Here is what CPU-Z and the motherboard’s BIOS reports once the memory is installed.

There wasn’t much available in the way of marketing materials at the time this review was written, but the G.Skill marketing team has this to say about the new Ripjaws V line of memory.

The Ripjaws V series DDR4 memory will be available in kits of various configurations and capacities, comprising of 4GB, 8GB, and 16GB modules with performance ranging from the standard 2133MHz to staggering 3733MHz at ultra-low voltages. The high-density 16GB single modules are manufactured from highly selected Samsung IC memory chips, packing both capacity and performance in a single module. And of course, all high performance kits are XMP 2.0 ready for easy BIOS tuning and setup, as well as rigorously tested under hours of grueling benchmarks and memory validation testing software on the latest motherboards from major motherboard vendors for maximum performance, compatibility, and stability. 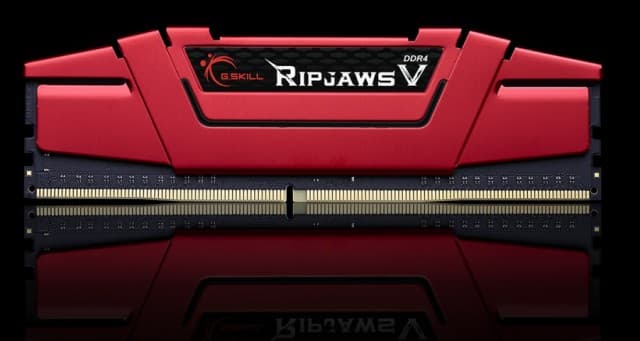 The retail packaging is similar to what G.Skill has been doing for quite awhile now. The snap-together plastic clam shell holds the memory firmly in place to prevent any damage during transportation. A small case badge/sticker is placed inside, which is the extent of the accessories. The front of the package gives us a look at the “sticker” side of the memory, which contains a basic set of specifications. At the back of the package is a marketing blurb similar to what’s mentioned above.

Here are some pictures of the memory once it was removed from the packaging. The kit we were sent has black heatspreaders that cover a black PCB. We like that the PCB is black because even the best looking heatspreaders will look odd when an old fashioned green PCB is seen poking out around them. Enjoy the pictures!

Once installed in our test system, we start off with a stability check at the advertised speed/timings/voltage. We use our Ultra-X R.S.T. Premium USB memory tester for this task. The folks at Ultra-X provided us with the tester, and we’re lucky to be one of only a few review sites that have one. The Ultra-X memory tester is a bootable USB device that is a relentless, memory pounding beast and will definitely find any weakness or potential problem a memory kit may have. The five passes we like to run can take quite a while to complete depending on the capacity of the kit being tested. It took just under four hours to test this 8 GB kit, and it finished with no errors found. We’re off to a good start!

Our in-OS stability test is performed using a 32M run of HyperPi, which is a good stability test in its own right. We didn’t expect any problems here, especially after the kit passed the Ultra-X R.S.T. test. The kit flew threw this test as well with no errors. At this point we’re confident the Ripjaws V kit is perfectly stable at advertised speed/voltage/and timings.

All three kits were tested on the same test system as shown above with the XMP profile in place. Each test was run three times and the results averaged. The graphs below show percentage values with the G.Skill Ripjaws V DDR4-3600 MHz being the basis and therefore, always 100%. For the scored benchmarks, a higher percentage is better, while for timed benchmarks, a lower percentage is better. Below each graph is a table with the raw data used to compile it.

Starting with the AIDA64 suite of memory tests, the faster speed memory really pays a dividend here. It easily handled the other two kits by a good margin. Keep in mind, a lower percentage is better on the Latency test.

SuperPi 1M shows just a fraction of difference between the three samples, but the Ripjaws V did squeeze out a win here. SuperPi 32M is also a win for the Ripjaws V, but by a little larger margin. The wPrime 32M test shows a slight victory for the Ripjaws 4 kit, probably due to its tighter timings. The ADATA XPG Z1 stole a win in the wPrime 1024 run, but by the slimmest of margins over the Ripjaws V kit.

We use 7zip’s built-in benchmark to test file compression performance. The Ripjaws V kit took top honors here by a small margin. The PoV Ray and x264 benchmarks are used to test video compression and conversion.There was virtually no difference between the comparison kits during the PoV Ray testing with less than PPS difference between all three. The x264 Pass 1 and Pass 2 results show slightly better performance for the Ripjaws V over the other two kits, but by a small margin.

Even with the slowest timings in the comparison group, the huge speed increase over the comparison kits proved to be the deciding point. With a 1200 MHz advantage over the ADATA kit and 600 MHz over the Ripjaws 4 kit, we expected the Ripjaws V kit to provide better performance. Once a few more DDR4 dual-channel kits that are optimized for the Skylake/Z170 platform land in our hands, we’ll be able to provide a more tightly grouped set of comparison samples.

The fastest set of Ripjaws V currently available will be the DDR4-3733 kit, so we were curious if our kit could reach that plateau. We overclocked our 3600 MHz kit to the specifications listed for the 3733 MHz kit, and it booted right up and completed a full run of HyperPi 32M. We didn’t even have to raise the voltage! This resulted in a HyperPi time nine seconds faster than at the stock 3600 MHz settings. In order to get a 3800 MHz, you’ll have to spring for one of the Trident Z kits… or will you? Not according to our tests, as we were able to reach 3800 MHz using the specifications from the Trident Z 3800 MHz kit. We did have to use a little over 1.41 V to stabilize things, but 3800 MHz is easily doable. At 3800 MHz, we shaved another four seconds off the HyperPi 32M time.

Anything past 3800 MHz required either lowering the timings to a point where performance took a major hit or voltages that approached the danger zone. We tried 3866 MHz, but the kit didn’t seem to respond to voltage increases up to 1.45 V. So, we’ll settle on a 200 MHz overclock, which is pretty impressive on a kit this fast out of the box.

Turning our attention to the timings front, we returned the memory to its default speed of 3600 MHz to see if we could tighten things up a bit. In a nutshell, this kit doesn’t like to go lower than CL 16, and even that took right at 1.45 V to stabilize. The tRCD and tRP settings are tied together on the Skylake platform, so a single option in BIOS changes both of those values now. If we tried to lower those two timings, the system wouldn’t post. We were able to lower the Command Rate to 1T without difficulty, and the kit seemed perfectly content to use that setting. Here is a screenshot at 16-18-18-38-1T, which incidentally resulted in our best HyperPi 32M time yet. Obviously, the timings can be tightened up quite a bit more if you’re willing to lower the speed of the kit, but we normally like to see what can be done at rated speed.

There isn’t much to complain about on the overclocking front as the Ripjaws V DDR4-3600 MHz kit can easily deliver 200 MHz more speed. Tighter timings proved a little more difficult at stock speed, but we were able to get a little accomplished there as well.

G.Skill continually strives to push the boundaries of memory performance, and the Ripjaws V 3600 MHz kit is yet another example of this effort. Available in a wide variety of color choices, capacities, and speeds, the Ripjaws V line is likely to draw the interest of anyone building a system around the new Skylake platform.

Out of box performance is terrific, and the kit is very receptive to overclocking, which is something the enthusiast crowd will enjoy. Aesthetically speaking, the black kit we looked at today will easily integrate into a wide variety of themed system builds. If black isn’t your thing, then Blazing Red, Steel Blue, Radiant Silver, and Gunmetal Gray are the other color options available.

As you can probably imagine, memory at speeds like this doesn’t come cheap. The Ripjaws V DDR4-3600 MHz 8 GB kit sells for $399 at Newegg, and it’s the only DDR4-3600 MHz option there is right now. Given the tedious binning process that ensures reliability and stability at these speeds, we can understand how G.Skill arrives at that price point. Although the G.Skill Ripjaws 4 kits are much less expensive, we can still confidently recommend the Ripjaws V if you want the absolute bleeding edge of performance regardless of price. We do, however, expect the price to drop more in-line with other DDR4 kits as more high MHz kits come out.

If you’ve been thinking about getting into the Skylake platform and want to couple that adventure with one of the fastest memory kits on the market, you’ll want to give the G.Skill Ripjaws V DDR4-3600 MHz kit serious consideration.

G.Skill is pushing DDR4 memory to new heights yet again. This time they are releasing the fastest available Ripjaws 4 kit at a whopping 3666 MHz. The 16GB kit will be available in a 4X4GB arrangement and uses Samsung IC chips. It’s going to be fun watching just how high manufacturers can push DDR4 memory as time goes by, but you can be sure G.Skill will be at the forefront. Here is the press release we received today. Read More

G.Skill is on the move and will soon make available several new products to the gaming and enthusiast communities. In addition to expanding their DDR4 memory to include the Trident Z series, you can expect to see power supplies, gaming keyboards, gaming mice, and gaming headsets. We received a few press releases from G.Skill about these new offerings, and here they are! Read More