G.Skill has been one of the most popular RAM brands for years, so it’s no wonder that many overclockers and enthusiasts wait for every new memory series’ premiere. G.Skill already used us to bring to the table something special that always helps to beat the competition. Some of their DDR5 memory kits offer higher out-of-the-box frequency and lower latency which we can see in a wide range of SKUs.

G.Skill DDR5 memory kits have been in stores for some months, but these, more interesting (read: higher speeds and low timings), were not released yet. The main reason for that seems to be the lower-than-expected capabilities of the current motherboards with the Z690 chipset, which may change with the premiere of the upcoming AMD and Intel chipsets later this year.

Today we present one of the kits that should satisfy all those looking for a balance between low latency but not necessarily the highest frequency out of the box. In other words, fast specifications that we expect to work on every popular motherboard and promise further overclocking and tweaking. We’ll begin by sharing the specifications and features of the Trident Z5 memory kit.

The G.Skill Trident Z5 DDR5-6000 CL30 is available in 32GB kits that contain two 16GB modules. This is optimal for most users regarding compatibility and capacity. The modules have one pre-programmed XMP profile, which works without issue on most Z690 motherboards. The XMP profile worked fine on MSI MEG Z690 Unify-X and ASUS Strix Z690I-Gaming WIFI. I assume it should also work on lower series motherboards that usually have problems with DDR5-6400 or above. Even though the tested memory kit has low CAS latency, the main problem is typically the frequency.  DDR5-6000 usually works fine on all brand motherboards.

Below are screenshots from the ASRock Timing Configurator with a more detailed timings list and additional confirmations in CPU-Z. As we can see, G.Skill Trident Z5 uses Hynix IC. Hynix IC overclocks high and produces less heat than the Samsung IC, so it promises good results. This is excellent info for all who are into overclocking.

G.Skill Trident Z5 DDR5-6000 CL30 memory modules are rated to work at 1.35V, which is about the upper limit for computers with limited or no additional airflow. This is also as much as competitive brands like ADATA or Team Group typically use for the same or not much higher frequency at CL40, suggesting that G.Skill trusts the Hynix IC more or uses better binned IC for their lower latency kits.

The Trident Z5 DDR5-6000 kit arrived in retail packaging, a flat box about the size of other high-end RAM kits. In addition to the two memory modules is a sticker with the G.Skill logo. It would be great to see it refreshed, perhaps larger or semi-transparent to put on a glass window, as I don’t think anyone is using it in the current form.

The installation of memory modules seems straightforward, so it doesn’t require any other manuals, but those users who aren’t sure how to do it properly can check the G.Skill website or a motherboard manual.

G.Skill Trident Z5 memory modules have an improved design of the previous Trident Z series. I feel it’s a move in the right direction as they look better and are eye-catching.

Besides the new shape, there is nothing unusual. The aluminum heatsinks are helping to lower the temperature of quite hot DDR5 memory, but I won’t hide that some larger heatsinks of competitive brands do that a bit better. It’s simply a matter of size. On the other hand, Trident Z5 modules fit almost everywhere, while competitive solutions may be too large for some CPU coolers.

The RGB illumination works without issue on ASUS and MSI motherboards. Since G.Skill is one of the most popular brands, motherboard manufacturers tend to improve BIOS and software for their products. It’s a good idea to keep it up to date as the new version may always help if there are any problems.

Below are some test rig photos with RGB illumination on the MSI Z690 Unify-X motherboard.

The XMP profile was tested in AIDA64 System Stability Test and passed without problems. All performance tests, including the stability test below, were performed on the MSI Z690 Unify-X motherboard.

Tests were performed on popular synthetic benchmarks and benchmarks included in popular games. The list consists of tests that tend to react well to memory performance. Older popular benchmarks and tests based on pure CPU performance were skipped as we wouldn’t see any difference.

For the readers’ convenience, I added all overclocking results to the comparison so you see if it’s worth the overclocking.

AIDA64 offers us the most popular synthetic memory benchmark. Results are easy to read; as we can see, it’s scaling great with memory frequency. The best results are on the overclocked memory kits with tightened sub-timings. The limit on the test rig was DDR5-6800, while the tested G.Skill memory kit can make some more. The XMP profile will be more than enough for most users, but the DDR5-6800 can be exceptional for competitive benchmarking.

PCMark 10 uses popular applications to perform tests close to daily tasks. Here the results are, for all intents and purposes, the same.

In 3DMark series benchmarks, G.Skill memory kits perform slightly better than the competition due to improved XMP profiles. After overclocking, we can count on some more.

As with all 3DMark benchmarks, we can quickly notice the difference in scores, but these scores won’t translate into a significant performance gain in games. Overclockers participating in competitive benchmarking would see RAM tweaking as worth the time, while gamers should use the XMP profiles and enjoy favorite titles.

Results in the Unigine Superposition benchmark are on the edge of the margin of error. They’re so close that rerunning the benchmark may change the order.

The Final Fantasy XV Benchmark breaks the trend visible in most other benchmarks. The higher the frequency, the higher the performance doesn’t hold here.

Shadow Of The Tomb Raider

In benchmarks based on popular games, everything looks a bit better. The XMP profile of the Trident Z5 DDR5-6000 CL30 memory kit is somewhere in the middle, only a 1 FPS shy of the DDR5-6400 kit. At a lower but still the most popular 1080p display resolution, overclocked settings can give us about a 4% performance gain.

In Far Cry 6, all we could gain from overclocking was 1FPS. It’s not worth the hassle and time to overclock and test stability.

In the Assassin’s Creed Valhalla, results are very close, giving us up to 3FPS between the slowest and the fastest setting. The XMP profile of the DDR5-6000 CL30 kit is again not far from the best overclocking result.

For some users, the XMP profile is never enough. All those who love to push the limits will be happy to hear that the Trident Z5 has high overclocking potential.  Let’s look at our results.

As with our new DDR5 reviews, we set an upper limit of 1.55V, which will be about the maximum for most overclockers. This voltage still seems safe while giving us the best results for competitive benchmarking. We must remember about a good airflow or even water cooling as DDR5 memory kits don’t like too high temperatures and start generating errors faster than typical DDR4 modules. Depending on many factors, memory modules may lose stability at higher frequencies and over 60°C. If we push the limits, we may see differences even at 40-50°C.

For daily overclocking, including games, I’m not recommending anything above 1.45V as the performance gain won’t be visible, while some memory kits may generate random errors.

Below are typical temperatures without any additional airflow. You can expect better results with a direct fan or forced multi-fan push-pull configuration in the PC case.

For the performance comparison tests, I’ve used MSI Z690 Unify-X. However, this motherboard can’t work with memory above DDR5-6800, so I had to move to an additional setup using the ASUS Strix Z690-I Gaming WiFi to try for higher frequencies. ASUS motherboards also aren’t the best, but it works at DDR5-7000. This was the tested limit of stability.

Below results were stable in various benchmarks but not in long stability tests. If you wish to use these settings, you may need to adjust some timings or voltages to make it work without issues.

Our results are slightly lower than expected due to some Windows services in the background, so that you can count on even better results on a clean OS.

CL30 could run up to DDR5-6800, and this frequency was still easy to stabilize. Even if you don’t want or can’t use CL30, then CL32/34 should be reasonably easy to set at lower voltages without losing a lot of performance.

The limit of our test rig was DDR5-7000, and I’m sure we could easily reach DDR5-7400 or more if we had a better motherboard. However, this is a matter of luck that isn’t on my side, considering how many motherboards I already tested. It doesn’t change the fact that our readers may set higher frequencies. Feel free to share your results on our forums.

G.Skill memory kits used us to high overclocking potential and high quality, so it’s hard not to recommend the tested memory kit to all enthusiasts and overclockers. I’m sure you will have a lot of fun.

G.Skill delivered another exceptional memory kit that performs well and comes highly recommended for overclockers. Even if you are not into overclocking, you will be happy to see that the Trident Z5 offers high performance and is one of the rare (as of this time) memory kits sold at such low latency at DDR5-6000.

Even though we see higher memory frequencies, DDR5-6000 is a sweet spot for all users. Its frequency is high enough to deliver outstanding results and low enough to be compatible with an overwhelming majority of Z690 and B660 motherboards on the market. I could say it’s a perfect balance for all those who wish exceptional performance but don’t want to worry about compatibility. There were no problems with the tested memory kits on three different motherboards. The XMP profile and RGB illumination worked perfectly fine. G.Skill is one of the most popular brands, so motherboard manufacturers tend to provide long-standing support and improved BIOS’. 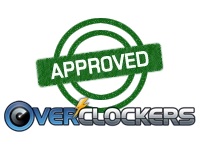 Forum Wars is an online, team-based overclocking/benchmarking competition hosted by The Raptor Pit. Basically, each team is divided up into classes, based on hardware limitations. Classes compete against each other, and basically the team with the most winning classes wins the wars. There’s quite a bit of strategy involved in class placement, and we’ve got some guys on our team that are great at that. OC Forums is on quite an impressive winning streak, which we’d like to keep going.

This guide will teach you how to properly overclock your Phenom II, and squeeze out every last drop that the CPU has to offer.

Today we’re going to have a look at an insanely-spec’ed memory kit, G.Skill’s high frequency, 2×4 GB DDR3-2933 TridentX kit. It is designed for one thing – hitting extremely high frequencies on the Intel Haswell platform. Of course, people looking to buy such a kit want to know how it performs too, so we’ll look at that for you as well.

Today's review presents one of the kits that should satisfy all those who are looking for a balance between low latency, but not necessarily the highest frequency out of the box. The Trident Z5 32GB DDR5-6000 CL30 memory kit offers high performance and compatibility with popular motherboards and promises high overclocking potential for those who love to push the limits.