Most folk would be pretty happy with a brand new, state of the art, £300 Geforce 3. The thought of strapping on a water cooler, peltier element and soldering resistors to it would have them crying “Void Warrantee”.

Well, maybe they have a point but I just can’t help myself – I’m never happy until I’ve wrung out the last few ounces of performance, so by the time my Elsa Gladiac 920 Geforce 3 was delivered (after a month of waiting) its fait was already sealed.

The plan was to peltier cool the GPU and modify the card’s voltage regulators. I’d already tried this on my old Geforce II GTS with some success, so I was hoping it would be pretty straightforward.

Even as the standard Elsa Gladiac 920 is a fine card, I’m sure you have already read loads of articles on the Geforce 3’s features, so I won’t go through them all here (for anyone who has been living in a cave for the last few months you can read up on the wonders of ‘nFinite FX Technology’, ‘Pixel and Vertex Shader’s and all that good stuff on NVidia’s site).

Ripping open the box this is what I found: 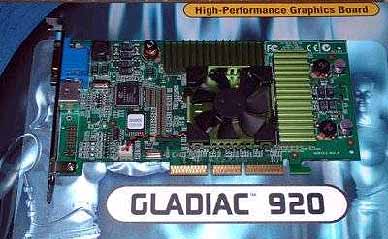 The Elsa Gladiac 920 is made exactly to the NVidia reference design, like all other Geforce3 cards except the Asus. After a brief test in its standard form, I established that it overclocked to 220MHz core/515MHz memory; this is nowhere near what some people are reporting, but I guess cards vary an my card was not from the top of the pile. Hopefully by the time I was finished, I would still be getting some impressive MHz out it.

Straight down to business: With the card only an hour or so old, off came the puny (but noisy) standard heatsink and fan. By the way, the standard heatsink has one of those awful thermal pads between it and the GPU. On my card it was only contacting the chip in a few places near the edges. My advice, even if you don’t plan to change the heatsink, would be to scrape off the thermal pad and use a good quality thermal paste (Arctic Silver) – this alone should be worth a few MHz. 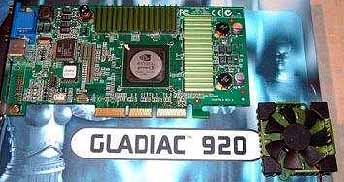 So there’s that wonderful Geforce 3 GPU that all the hype’s about. The stepping of the chip is ‘A5’, which I believe is the case for all current production Geforce 3s.

Once the standard heatsink was tossed into my spare parts bin, on went my home made water-cooled peltier set-up: 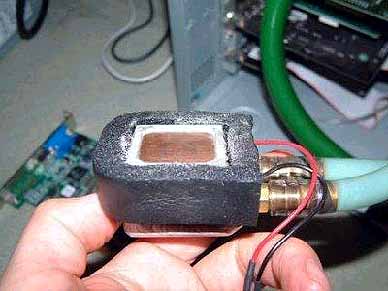 The peltier is 72 Watts powered from a 9 to 15.2 Volt – 25 Amp dedicated power supply (usually set between 14 and 15 volt). The water block is designed by yours truly. I don’t have access to a milling machine or aluminium welding kit (or the skill to use them properly) so I had my local friendly machine shop make it up. This is the design should anyone want to give it a try:

I know copper would be slightly more efficient, but in practice the difference is tiny and aluminium was more readily available, easier to machine and lighter, so aluminium it was.

I have some copper in my system also and I know some people will be crying ‘Galvanic Corrosion’. However, I know a little about the subject through my ‘day-job’ and suffice to say it’s not something I have experienced any problem with in a year of operation. I often find myself being drawn into ‘heated’ debates on this subject in the discussion group, so I’m saying no more.

I was surprised to find that the RAM-sinks were only bonded to the memory chips by small ‘blobs’ of glue. I could actually see light between the sinks and the chips, so they were next to come off. A little gentle persuasion with a flat bladed screwdriver and hey-presto, off they came. If you give this a go, be real careful not to knock off any of the resistors or damage the PCB traces around the memory chips (you have been warned!) 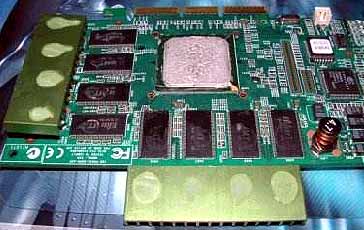 The 3.8ns EliteMT DDR memory chips are revealed. Now 3.8ns chips should be rated to run at 526Mhz DDR (1000/3.8 x 2) so my memory was, as standard, not even hitting its rated speed. I cleaned up the chips and the heatsinks and glued them back on using a thin film of Arctic Silver/Epoxy mix.
To get some air flow over those memory heatsinks, I installed an 80mm case fan blowing onto the card (cunningly mounted using some old mechano!).

I can’t take any credit for figuring out how to go about voltage modifying the card as all I did was follow the instructions I found at X-bit Labs – if your interested in trying it, have a look here.

Be warned: You need really good cooling to get away with the voltage mod; even with my peltier set-up, the GPU temperature increased significantly after the mod, so it probably shortens the life of the card too.
The mod consists of ‘shunting’ the voltage regulator with resistors. Soldering them on is tricky and requires a steady hand and a small soldering iron. This is what a couple of the resistors look like, there are 3 in all: 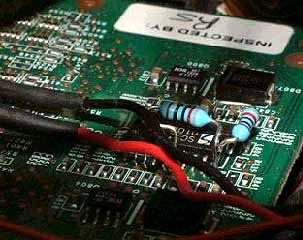 I measured the standard GPU core voltage as 1.5V; after the mod, this went way up to 1.82V – that’s over 20% increase (is that burning silicon I can smell?).

This is the finished result, just itching to be acquainted with my rig’s AGP slot: 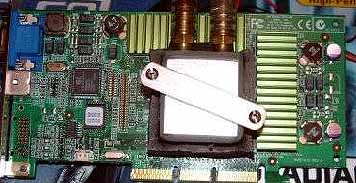 The retaining clip is made from a bit of aluminium strip and a couple of bike spokes and is located in the original mounting holes where the standard heatsink was clipped down. Unfortunately, the Elsa has no built in thermal monitoring facility, so to get some idea of the core temps I also fixed a thermister on the back of the card.

In the Case, ready to go; that’s an Eheim 1250 water pump and the radiator (old auto heater core) is just out of shot in the top of the case. You can also see the 80mm fan pointing up from below the graphics card: 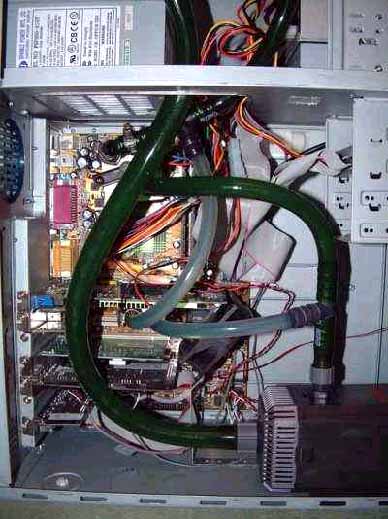 NOW TO POWER IT UP

After a good check for leaks (always in the back of your mind with water-cooling), it’s push the power button time. No matter how many times I do stuff like this, I always find myself holding my breath when it comes to powering up for the first time. I should not have worried, it booted up as normal. The temp probe I had fixed to the back of the card gave me a temp of 15C – that’s 10C below case temperature but not so cold that condensation is a worry. Looking good so far.

Now to see if all this work was worthwhile:

The default frequencies are 200Mhz core and 460MHz memory. In standard trim, I had established the maximum stable clock speeds were 220MHz core and 515MHz memory.

I was not expecting too much from the memory, but I managed 544MHz – that’s 84Mhz over default – every little bit helps!

The temps from my thermister recorded a peak of 30C; obviously a volt modded Geforce 3 GPU produces a great deal of heat, as the same peltier kept my PIII700 @ 1050MHz down to around 5C. Maybe if I could get hold of a more powerfull pelt, I could get it down to around 0C – I wonder where I can get a 172W pelt…Hmmm.

What do all those extra MHz translate to FPS in games?

To find out, I ran a couple of well known and much loved benchmarks: 3Dmark2001 and the old favourite without which no set of benchmarks is complete, Quake III Arena.

System specs for the test were as follows:

Pretty impressive if I do say so myself!

The benchmark scores show a nice linear increase and would not appear to be bottlenecked by memory bandwidth, as in earlier Geforce cards. My results perhaps give some hint of what we could expect of a Geforce 3 ultra should such a card ever be released

So to summarize for my trouble, I got a 70MHz increase in the core and an 84MHz in the memory over standard settings, not too shabby!

I just wish my card had been a better overclocker in the first place – maybe then I could have gotten close to the magic 300/600MHz clock speeds (some people are never happy !)

Was it worth all the trouble?

Well, I guess it depends on your view point, but for me – Yes. I enjoyed every minute of it, the card’s running 100% reliable and my benchmarks show a healthy increase. As for game play, well, the standard Geforce 3 isn’t exactly slow, but mine is now just that bit faster and you never know when you’re going to need an extra few frames-per-second with new more graphically intensive games just around the corner.

My CPU is now the bottleneck in my system, so my next project will be based around an AMD Palomino / DDR motherboard – must start saving.

If you’re thinking about giving something like this a go yourself, I’d be glad to give advice or simply compare notes on how you got along – just drop me a line.

What One Person Can Do in a Forum

When I first began overclocking in 2002, I was totally clueless so naturally I had many questions, many of which related to video cards.

SEVEN HUNDRED DOLLARS FOR A VIDEO CARD!!!!???? YOU CAN BUY A WHOLE DAMN COMPUTER FOR THAT!! See for yourselves. They don’t need publicity at NVidia; they need drug rehabilitation. We will not review any such absurdly priced product until the