Gigabyte and MSI are at it again…this time Gigabyte fires back at MSI on their claims that Gigabyte boards aren’t really ready for native PCIe Gen3. Just like MSI, Gigabyte’s presentation slides are technical in nature, and focus on the key components that require a board to be PCIe Gen3 ready. Let’s take a look at the slides, courtesy of the folks at TPU. 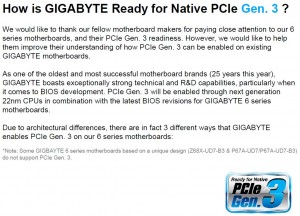 There are a few motherboards that definitely don’t support Gen3, Gigabyte mentions, which are the Z68X-UD7-B3, P67A-UD7 and P67A-UD7-B3. However, they have roughly 40 other boards that they claim are PCIe Gen3 ready. However, what constitutes “PCIe Gen3 ready” is what’s up for debate here. Gigabyte claims that on motherboards with only one PCIe x16 slot, that Gen3 switching isn’t “necessary” because a GPU will run at Gen3 x8 natively without switching. Note, that’s x8 Gen3 PCIe and not the full x16. So, technically, their 40 or so boards will support Gen3 PCIe but not at the full x16 and only if there is a single Gen3 PCIe slot in the system.

So, who’s right? Gigabyte or MSI? Let us know what you think in the comments!