SUMMARY: A study in contrasts – a VIA 133A board that performs on par with a BX board but is an overclocker’s bust. The good news is that VIA just might pull it off and offer Intelopoly some real competition.

I read a review over at Anandtech on a bunch of VIA 133/133A boards – he rated the Gigabyte 6VX-4X his “Editor’s Choice”. I’m building a system for a friend and decided to use the Gigabyte; as a side benefit I figured I could test it out. This is a computer for his son who plans to use it for the net and word processing (not a gamer) so I figured the Gigabyte would do OK.

Obviously I am looking at this board from a different perspective – as good as it seems to be, is it an overclocker’s board? Well, as good as it might be overall, it is sadly lacking in the features we all deem important.

In short, there are none. If you use a voltage adjustable slotket, you can skirt the problem. Slot 1 CPUs are out of luck.

There are readouts in BIOS for CPU Temps – the Gigabyte however does it with a thermistor probe located near the slot 1 (picture below) – in my book inadequate. You can set a temp in BIOS so that if you exceed it, the computer shuts down. This is a nice feature (especially for unattended operation) but by the time the probe picks up the high temp, the CPU might be toast already. 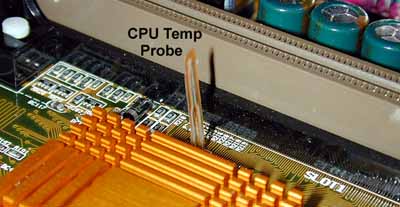 Not my kind of CPU Temp Probe – much prefer the Thermal Diode. 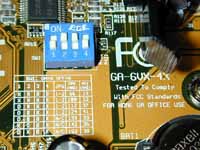 Just in case you never saw a Dip Switch.

Many boards today do not feature a lot of real estate to accommodate the heatsinks we know and love, like Alphas and Global Wins. This board is downright hostile to anything much beyond Intel’s OEM unit. As the picture below shows, Intel’s OEM heatsink clears the DIMM slot OK, but this board sticks the power slot in the worst place possible. Now I know you could probably hack a heatsink to fit, but who wants to go through that? 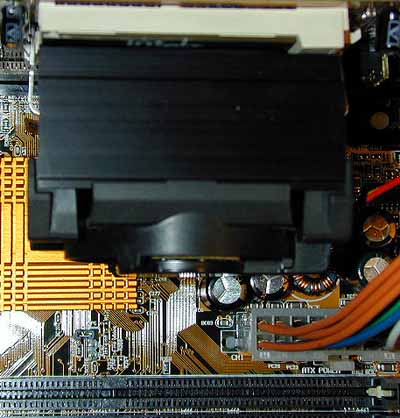 A look from the top at a very heatsink unfriendly design.

Now I did find one that would clear all the capacitors and power supply connector obstructions and also clear the DIMM slot – the Golden ORB (see picture below). But note – just barely! And it did make a difference – with the Golden Orb I could run at 152 MHz with a CuMine 500E – I could not do that with Intel’s heatsink. Makes you wonder if Gigabyte owns stock in Golden ORB! 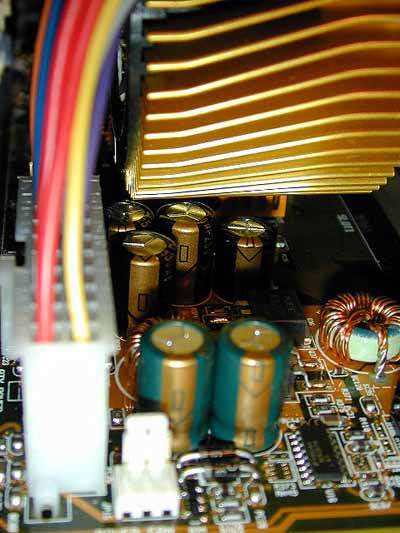 The Golden Orb just makes it – looks crowded and is.

Well, that’s the bad news. This board so lacks what many of us would consider the “basics” as to make it unattractive. And not that the board is a dog – as you will see quite the contrary. I guess Gigabyte designed this board for the reseller market – it would make a nice platform for an office system.

BUT IS THERE ANY GOOD NEWS?

Yes there is – I did not run an exhaustive set of benchmarks, but I did run some SiSandra tests and found the Gigabyte to perform better than my SOYO +IV. I ran these tests with the same PIII 500E and PC133 128MB stick. I ran the SOYO at 150 FSB and the Gigabyte at 152 FSB, not exactly the same but close enough to give relative performance measures:

Results are close and if you adjust for the bus speed difference (1.3%) they are even closer. Let’s say the two boards are about equal in performance (with the exception of Memory FPU – interesting difference).

One notable difference between the two boards is AGP; the SOYO was running the AGP port at 1x and 100 MHz while the Gigabyte was at 2x and 76 MHz (Matrox G400 16 MB). This is the advantage of a 133A board – more kindly AGP treatment. The good news is that we are now seeing performance comparable to the venerable BX chipset. The first batch of motherboards with VIA133 were 5-10% under BX benchmarks.

The Gigabyte is a good board, but not for overclockers. The VIA 133A looks real promising, but look at test results very carefully – some boards are coming up short in performance. There is a learning curve for motherboard manufacturers in implementing the VIA 133A – if you’re in the market for a new motherboard, look real hard at performance benchmarks before committing. The vendors hate it, but I still believe if you can wait a while, stay put. Better is yet to come.


I’ve Got A Folder (Literally)