If you own a socket FM2+ GIGABYTE motherboard, the company has good new for you. With a simple BIOS update, your motherboard can support the newly launched AMD Godavari APUs. Here is the press release we received today from GIGABYTE on the subject. 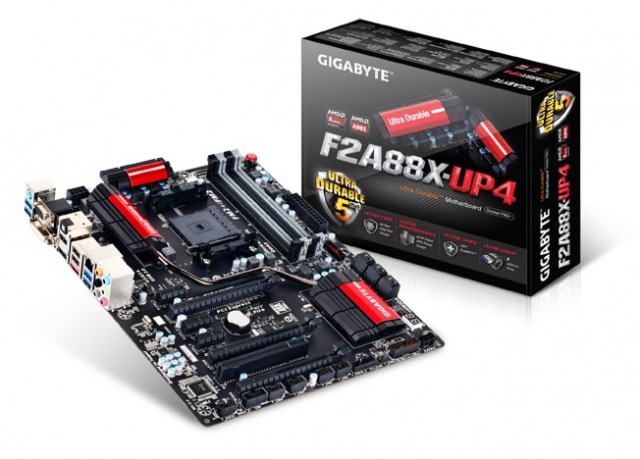 City of Industry, California, May 28th, 2015 – GIGABYTE TECHNOLOGY Co. Ltd., a leading manufacturer of motherboards and graphics cards is proud to announce that its lineup of FM2+ motherboards is now compatible with the newly launched Godavari APU from AMD. Featuring 12 CPU and GPU compute cores (4+8), the latest AMD A-Series APU brings great support for exciting new technology such as AMD FreeSync™, DirectX™ 12 and also Windows 10 64-bit support. Paired with the connectivity featured on GIGABYTE FM2+ motherboards, the combo offers the best platform capable of delivering great processing performance, smooth high framerates in the most popular online game and a path to easy upgrades with many of the latest technologies available for today’s desktop PCs.

To ensure your GIGABYTE FM2+ socket A88X, A78, A68H and A58 chipset motherboards can support the latest Godavari APU from AMD; make sure to update it to the latest BIOS which in the download section of GIGABYTE website: http://www.gigabyte.us/support-downloads/download-center.aspx

For more information about the GIGABYTE FM2+ motherboards, go to:
http://www.gigabyte.us/products/list.aspx?s=42&jid=0&p=2&v=32

Gigabyte Presents its Range of FM2+ Motherboards for Kaveri APUs

Gigabyte has released the new AORUS ELITE series graphics cards today. Starting with the AORUS GeForce RTX 3060 ELITE 12G and its awe-inspiring triple ring RGB lighting. This new line of cards will utilize the effective Windforce 3X cooling system. Other features will include onboard dual BIOS, graphene nano-lubricated fans, and an included backplate for added structural rigidity. Pricing and availability are still a question at the time of this article. Below is Gigabyte’s official press release.

We’ve done our fair share of reviews on the Trinity platform, but this will be our first time looking at an ASUS offering. Today’s review will be on the F2A85-V Pro, which is a top-end offering from ASUS’ FM2 line of motherboards. So, let’s take an in-depth look at this offering from ASUS and see how it stacks up against previously reviewed FM2 Trinity motherboards!

Biostar and Asus boards also support this update. Looks to me like the only real dif is slightly higher gpu clocks. Still I'm excited about any updates to my board. Though I should grab the 120gb 850 evo msata now that it's avail.