SUMMARY: Significantly better 1U CPU cooling, but will the production version be as good as the prototype? 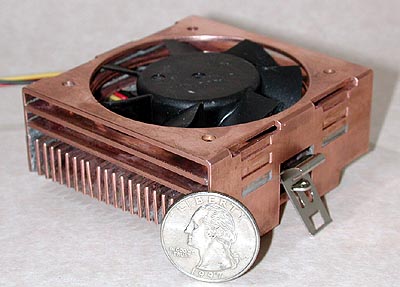 The good guys at Millennium Thermal Solutions were nice enough to send a prototype 1U heatsink to test. The 1U is used in systems where height is a problem – for example, 1U server racks and, more recently, SFF (Small Form Factor) PCs such as Shuttle’s SS50.

The Glaciator 3X is an all copper prototype, and as such is not yet available. However, the prototype is interesting because it delivers significantly better cooling performance than any 1U heatsink I’ve tested to date, by a wide margin. More important, it does it at reduced noise levels. Cranking up the noise with a more aggressive fan delivers performance comparable to much larger heatsinks.

The Glaciator 3X was tested on the CPU Die Simulator which gives results that are unaffected by motherboard influences. I measured fan noise with a Radio Shack sound meter placed 8″ above the fan. At 4000 rpm, the Glaciator 3X will barely be heard inside a case.

Die Simulator results place the Glaciator 3X, at its highest speed, in the upper rank of heatsinks tested to date (Heatsink Ranking). Considering its size, this is a significant accomplishment.

The Glaciator 3X, if performance holds into the production version, is THE choice for 1U cooling and a strong contender for quiet SFF cooling. At 4000 rpm, noise was very low; with a Delta 38 @ 6656 RPM, noise was much higher but cooling performance was significantly improved.

Thanks again to Millennium Thermal Solutions for sending this our way. As soon as the production version is available, we’ll test it out. According to Millennium, there will be a P4 version available as well.

As chips get hotter and hotter, there will be more difficulty on the part of the manufacturers to keep the chips cool. What that means is the speed rating will occur at the highest speed that is stable at the