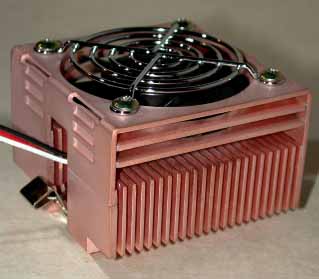 Millennium Thermal Solutions was nice enough to send over samples of the low noise versions of the Glaciator II. These units come in a low and very low noise version, the low with a 4200 rpm fan and the very low with a 3850 rpm fan. Everything about these heatsink are the same as the Glaciators with the higher rpm fans, so go HERE for specific details on the heatsink.

Noise levels on each were below my sound meter’s limits, so I’ll affirm that they are indeed low noise, with the very low noise model being almost whisper quiet.

The fans are labeled Space Fan, made by Mitachi Ltd (not Hitachi); these are model #s B602512M and L. They draw less than 2 watts, so it’s safe to use a motherboard fan header.

The Glaciators were first tested on the CPU Die Simulator which gives results that are unaffected by motherboard influences. I then tested each on an Iwill KK266+, modified to read AMD’s on-die diode, as an example of what users might see on their systems.

Die Simulator results place the Glaciators in the mid rank of heatsinks (Heatsink Ranking). The performance hit for the slowest fan is not as large on the Die Simulator as on the KK266+, perhaps due to the reduced air flow impact on secondary source cooling.

Interestingly, heatsinks they compete against feature much louder fans, such as Delta 38s, so that the Glaciators are delivering more cooling power at lower noise levels than comparably performing heatsinks.

These are not performance heatsinks by any means, but for very good cooling performance at very low noise, they are among the best we’ve tested.

Thanks again to Millennium Thermal Solutions for sending this our way.

I have had a long-standing hatred for the clip retention system most HSFs use. With the exception of a few designs, they are an accident waiting to happen. If you’re an active Overclocker, doing experiments to try to gain those