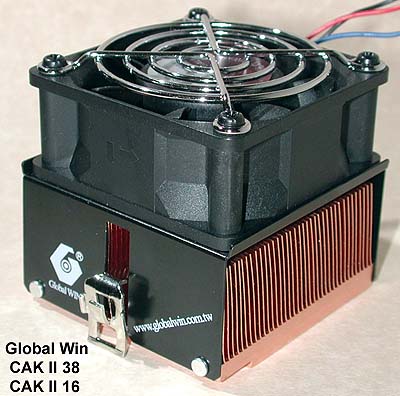 Global Win was nice enough to send samples of their all copper, skived heatsinks, models CAK II 16 and CAK II 38. They use exactly the same heatsink but with different fans. I’ll cover this shortly, but first, let’s take a look at the heatsink itself: 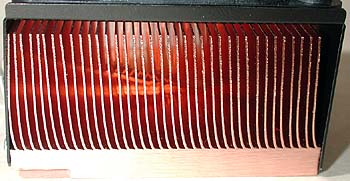 Skiving is a technique whereby the fins are literally shaved off the base – there are no solder joints, it’s all one solid piece. This is a new technique developed in Japan and we’re seeing a lot of new heatsinks using this technology. 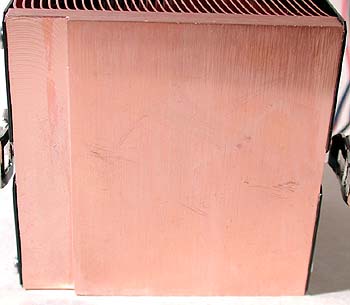 This is exactly the same as the CAK II 38 except it uses a temperature controlled fan: 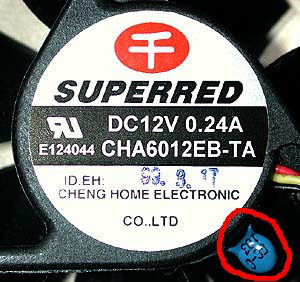 The little blue bulb hanging off the side is the thermistor. As air heats up, the fan speeds up. For overclockers, this presents a problem: If your case airflow is good and close to ambient temp, the air entering the fan is going to keep this fan from speeding up to what might be required.

For example, if you’re running Quake intensively, you want the fan to speed up as the CPU heats up. But if air entering the fan does not heat up, the CPU will but the fan won’t speed up. There should be some feedback as the heatsink heats up, but I don’t think you will see a 1:1 correlation.

To find out the temp curve, I ran the fan on an Iwill XP333 fan header while aiming a hair dryer at the fan’s intake. I taped a thermocouple next to the thermistor and read temps with the Omega Digital Thermometer while recording rpms as reported by MBM. I found the following:

My concern then is that this design is inherently flawed. I certainly could not get the fan to speed up much when I had the CAK II 16 on the Die Simulator, and I was not about to mount it on a CPU in that state. If you’re handy, you could clip the thermistor off the fan and maybe mount it at the heatsink’s base – this could work better.

Bottom Line: I can’t see anyone using the CAK II 16 for serious CPU cooling, and I would be hard pressed to use it on even a “normal” system. I don’t think temp controlled fans such as this are suitable for CPU cooling.

The CAK II 38 is a different animal – it sports a Delta 38 (or clone) fan with its attendant noise level. I measured its noise at 68 dBA with a Radio Shack sound meter 8″ from the fan’s intake (nb: This is not the same as manufacturer’s sound ratings, which are usually taken 3 feet away).

The CAK II 38 was first tested on the CPU Die Simulator which gives results that are unaffected by motherboard influences. Tests then were conducted on a variety of motherboards as examples of what users might see on their systems.

Very good performance but, as with many others, at the expense of your hearing and peace of mind.

One not so good, one very good. — Joe

SUMMARY: Danger Den tries out a pin fin copper waterblock. Note the fins visible through the holes. The good guys at Danger Den let me play waterblock designer. Just like with air, surface area in water cooling plays a large