An all copper entry with good performance.–Joe

The good guys at Global Win kindly sent me their latest all copper entry, the CBK38 (note: this supercedes the earlier version). It features 24 fins that are soldered to the copper base plate. They measure 1″ x 2 5/16″, giving an estimated surface area of about 116 inches², or 0.8 ft².

Note that the base does not overhang the socket’s cam box – I think this was done to increase airflow through the fins and cut down on weight. Even so, at 510 grams, this is not a light weight entry. 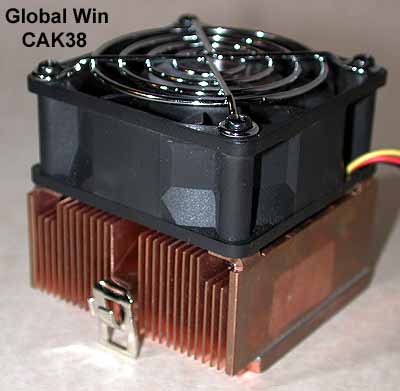 The clip is an OEM type – you must use a screwdriver to mount it on the socket lug. As OEM clips go, this one is fairly stiff. It is not indexed, so the heatsink can move along the clip’s axis – use some care in mounting it to ensure that the base does not ride up over the socket’s high point. 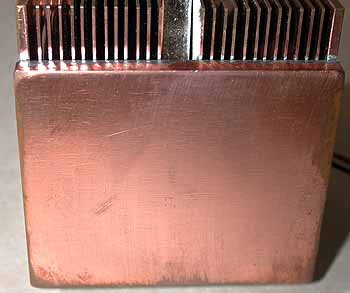 The base shows some fine machining marks but I couldn’t feel them. I think further lapping would add marginally to its performance. 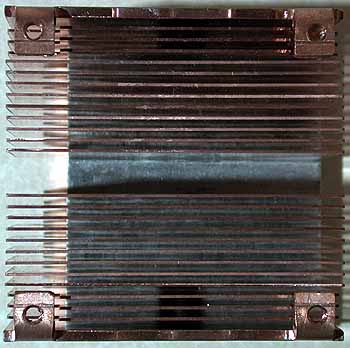 Looking down into the CBK38, you can see it’s about as plain-jane as it gets – nothing esoteric here in fin design or construction. In fact, this is about the simplest construction I have seen on a heatsink; basically 24 thin copper plates and two sides soldered onto a copper base plate, 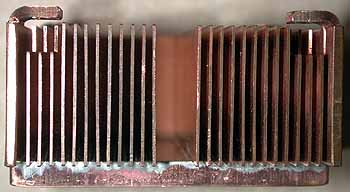 very evident as you view it from the side. The solder is also very clear to see:

Overall, I think Global Win opted for manufacturing ease and high airflow through the fins with this design. We are seeing more designs similar to this in some very effective heatsinks.

I prepared the CBK38 by boring a hole completely through the base so I could epoxy a thermocouple above the CPU. The thermocouple is attached to an Omega HH23 Digital Thermometer. Ambient temps were measured with a thermocouple placed about 1 inch from the fan’s intake. I used Prime 95 to stress the CPU on an Iwill KK266, BD133 (MBM temps are on-die) and Abit KT7. Arctic Silver grease was used in all tests. CPU Case Temp is the temp at that point where the CPU contacts the heatsink, CPU Back Temps are measured by a thermocouple on the center back of the CPU.

The fan is rated at 6800 rpm +/- 15%, 38 cfm; it is not labeled but it’s either a Delta 38 or clone. It comes with an adapter so that you can use a hard drive power plug instead of the motherboard’s fan header – a good move. I measured fan noise with a Radio Shack Sound Meter placed 8″ from the fan’s intake; the CBK38 measured 69 dBA, par for Delta 38s and their clones.

In addition, the CBK38 was tested on the Simulated CPU Die Tester at 73 and 139 watts (I show only 139 below, as C/W at 73 was identical). This is the “purest” test of a heatsink’s performance as extraneous factors, such as secondary heat path effects, are not included.

Iwill’s KK266+ continues to turn in lower C/Ws than the other motherboards used in the test; note particularly the MBM temp – for whatever reason, the CBK38 really likes the KK266+. I think its good airflow through the fins to the CPU’s top accounts for these readings. I’m sure you’re going to see some ga-ga reviews from sites that continue to use in-socket thermistor temps for heatsink testing.

The airflow through the fins is quite good and helps in achieving these numbers. I ran the T-Bird as spec speed and voltage to avoid any interpolation of CPU watts.

The Simulated Die was the most aggressive test and its C/W of 0.26 can be viewed as “worst case”.

Simple construction and good performance, although the fan is too loud for me. The CBK38 is a very competitive copper heatsink and a step up over some earlier copper entries from Global Win. Depending on pricing, the CBK38 could be a good price/performance buy.

If you believe motherboard in-socket thermistor temps, you’ll love this one.

Received the case 4/17: FIRST PICS HERE… Joe Review 4/7/01: Just got back from day one of Comdex Chicago, a show more notable for who wasn’t there than who was (no Microsoft, AMD, Intel, IBM etc.). Pickings were slim for