Very competitive performance from an all copper forged heatsink. — Joe

SUMMARY: Good performance and why not? A proven design. 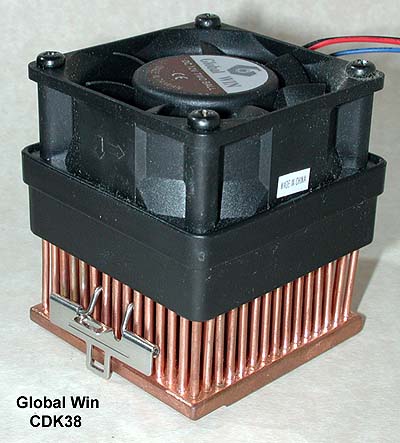 The good guys at Global Win sent over a prototype of a new all copper, forged heatsink – model #CDK38. Forging is basically taking a chunk of metal and squishing it under pressure into a shape. The advantage for heatsinks is that there are no solder joints – it’s a solid piece of metal.

Alpha was one of the first to do this successfully, so the process is mature and the benefits are well known. Global Win’s entry may change somewhat from what you see here, but it is a nice product as is. The pins 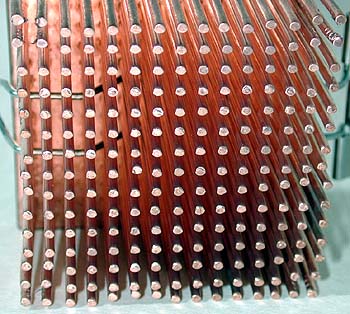 are smooth – there are 225 of them. Airflow through the pins is relatively unimpeded, adding to secondary source cooling on the motherboard. Note that the base 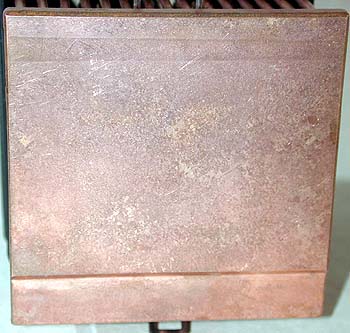 is “traditional” – no slots or gaps to wash air over the CPU carrier. It is smooth to the touch although mottled in appearance – the production versions will most likely show more “polish”.

The fan looks and sounds like a Delta 38 (complete with black label) – I measured fan noise at 67 dBA (Radio Shack sound meter 8″ from fan intake).

The CDK38 was first tested on the CPU Die Simulator which gives results that are unaffected by motherboard influences. Tests then were conducted on a variety of motherboards as examples of what users might see on their systems.

Global Win’s CDK38 prototype, assuming the production version is the same, will be a good cooling choice, although at the expense of fan noise.

Thanks again to Global Win for sending this our way.