SUMMARY: Cooling the Flip Chips is a real challenge for heatsink manufacturers – testing results so far show third party heatsinks to perform better than Intel’s retail unit, but not by much. The Global Win FKP32 performs nicely while the ICKool 80 mm, for all its size, bests Intel by only about 1C.

I received two heatsinks to test out – the Global Win FKP32 and an ICKool. The FKP32 came to me by way of Marty Hsu – he and his charming wife Winnie were in town and he bought one along from Taiwan for us to try out. I decided to test these against three other units – the Vantec Flip Chip, RDJD K601 and Intel’s retail heatsink (pix below). 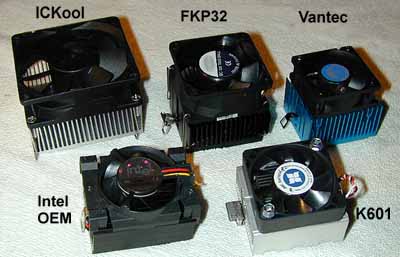 ICKool is a new guy on the block and they sent me a sample of their socket 7 heatsink; it features an 80mm fan (looks like 39 cfm @ 34 dBA) mounted on a heatsink measuring about 76 mm square (3″ square) with 25 fins. While large, it is only 50 mm deep (2″) so it does not block DIMM slots. It uses a unique clip that straddles the sides of the socket – the problem I see with it for Coppermines is that it does not mount parallel to the CPU; this is because the position of the CPU relative to the heatsink’s base is off center by a considerable degree.

However, for this test I was able to get the base parallel by “accident” – the Soltek slotket I use with my 500E has a set of jumpers that rests on the heatsink’s base (see pix below). These jumpers are the right height to even up the ICKool so that is lies parallel to the CPU. This is not a recommended solution and some redesign of the mounting clip is in order. 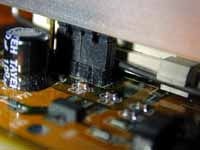 The Global Win FKP32 is a chunky looking unit similar in size to the Alpha PFH’s; it is 2 ½” (60mm) tall, about ¼” shorter than the Alpha but still blocks at least one DIMM slot. The base is 2″ (50mm) by 2 5/16 (59mm). It clips on and off fairly easily and is appropriately offset for CuMines. The fan is held on by wires rather than bolted, so changing fans is really easy.

As the pix below shows, the FKP32 is “T” shaped – I assume this is done to increase fin surface area. The inset pix is a close-up of the “T” and fan clip. All told the FKP32 has 17 anodized fins. The fan is the good old YS Tech 26 cfm unit that Global Win uses in many of its heatsinks – a tad on the noisy side but one is tolerable. 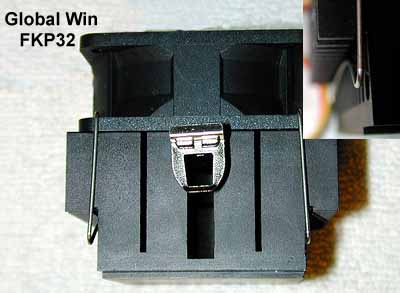 I tested each heatsink using my PIII 500E @ 667 MHz (133 FSB) while running Prime 95. I let the temps stabilize, then recorded the results from 500 one-second samples. Results are shown below:

The FKP32 does a decent job, besting Intel’s OEM unit by 3.4 C. I found that I did have to pay close attention to positioning the heatsink on the socket’s base; I sighted along the edge and moved it till it was parallel – I gained 1 C in cooling by being very careful about its position. This is not a “clip and run” heatsink.

Surprisingly the ICKool, for all its bulk, bests the Intel unit by a scant 1.1 C. In all fairness, I think the mounting clip is partly to blame – I eye-balled it and it looked parallel but it really is not the correct way to mount it. Let’s say the ICKool is a prototype that needs some further refinement and leave it at that.

The K601 and the Vantec were not far behind; the K601 is an outstanding price/performance heatsink. I believe extruded fin heatsinks are in for quite a challenge from cheap folded-fin units, and as more designs find their way to market consumers will benefit.

The FCPGA continues to amaze me – it is the coolest running CPU I ever had “out of the box”. Finding a superior air-cooled alternative to Intel’s OEM unit is a challenge – the Alphas so far are the performance leaders. Whether subsequent results justify the expense is an open issue.

This thread on OC Forums is a common complaint among PC users – how to handle PC heat buildup in you room.

Water has unique physical, thermal and chemical properties that also make it an excellent coolant for use in PC water-cooling systems. No other substance can provide all of the advantages and benefits offered by plain old water.