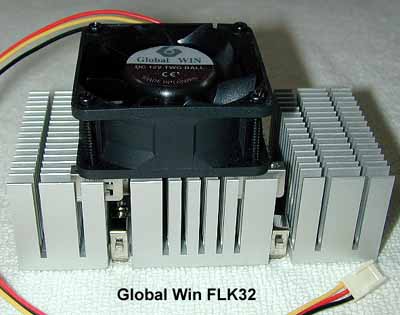 Why do we need this?

This is going to be a little different fan/heatsink review.

I read the computer hardware newsgroups a lot. Very often, I see somebody get so far with a processor, then say something like, “all I need is some extra cooling to get to ____.”

High-end fans and heatsinks are like a much, much cheaper version of Deion Sanders. It’s always better to have them than not, they can help you reach your goals in the right situation, but they can’t perform miracles when they are in a bad situation.

Why do we need big heatsinks/fans to overclock?

Overclocking generates more heat. This is bad for two reasons.

While this is something that normally takes a very long time to happen, the hotter a CPU gets, the faster this happens. A lot faster, even with fairly small temperature differences. AMD once ran some overclocking tests where they let chips get nice and hot, and reduced the life of the chips being tested down to a few months.

A lot of people say, “So what if the chip only lasts two years rather than ten? I won’t use it that long.” What they don’t understand is that two or ten years represents an average. That doesn’t mean every Intel chip will work for ten years, then they all stop.

If you took a million Intel processors and ran them normally, some of them are going to fail in the first six months. Others will last fifty years. Most will fall inbetween those two extremes.

If you do something that reduces the average life from ten to two years, and do nothing about it, you also increase the proportion of chips that will fail in the first six months pretty dramatically.

Now the proportion of Intel/AMD chips that fail in the first six months is very, very low, and reducing the average life from ten to two years will probably still leave most chips functioning after six months, but now a significant percentage of CPUs will fail shortly if you don’t do something about it.

Fortunately, you can easily do something about it. If heat is the major problem, and you get rid of the heat; no heat, no problem. Today’s advanced fans/heatsinks reduce heat so much, an overclocked chip in a properly cooled environment is likely to last LONGER than the average unoverclocked, not particularly well-cooled CPU.

So buying an excellent fan/heatsink is a cheap insurance policy on your CPU.

Will it make my CPU run faster?

If the only reason why your CPU won’t run at the speed you want is because it’s a little too hot for it to run, an excellent fan/heatsink can make the difference between success and failure.

But if the CPU just won’t run at that speed at room temperatures; it can’t perform miracles. It’s not just heat. CPUs are not all alike. Some can just overclock better than others.

Another big reason (for PIIs, Katmai PIIIs and current Athlons) for certain CPUs not to run faster are cache chips that are not ondie. These cache chips are not designed (like with Celerons and Coppermines) as part of the processor to run as fast
as the processor. They were built and rated to run at a certain speed, and they don’t usually do much more than 10-15% faster than that. Nowadays, there a couple games you can play with cache latency, but it pretty much still holds true.

Extreme cooling can have a significant effect on these cache chips, but don’t expect dramatic results at room temperature.

The heatsink/fan I’ve been using is a relatively small Aavid heatsink. With it, my CPU temperature measurements have been in the 90-93F range at an ambient temperature of about 70F.

The FLK32 is primarily meant for Athlons, but will also fit a PII. What does it look like? It looks like a big PII/Athlon fan/heatsink. If you want a picture and specs, go to http://www.globalwinusa.com/products/flk32.htm .

Getting the FLK32 on to my venerable PII was a bit of a challenge. Let’s say it’s a very snug fit, but you can get it on without modification.

Of course, you will apply thermal grease in a thin layer between the heatsink and the processor. Yes, you have to do it. No, it can’t wait until you try your new processor out. I’ve seen processors fail to overclock without it, but work fine with it, that’s why.

A big concern for many is how much room this takes. Some of the bigger fans/heatsinks block memory slots. Since I use two memory slots, this is of special concern to me.

I have an AOpen AX63Pro, and I am glad to say that the FLK32 does not block any memory slots, though you may not be comfortable with a CPU fan less than a half-inch away from your memory. I wasn’t, so I moved the memory to the second and third slots.

I cranked the machine up and used the measuring tools provided by AOpen, and instead of getting 90-93F, I got readings of 75-78F at a room temperature of about 70F. A rather dramatic improvement, I’d say.

One tip, by the way. You’re installing a fan, not an air conditioner. If you only give it hot air to circulate, it can only do so much. So when you’re figuring out where to put your computer, put it in the coolest spot you can reasonably find for it.

Noise? It is louder than the old Aavid fan, but then I have the case open, and that kind of noise doesn’t bother me. To me, it sounds like well-made machinery purring along, not distracting at all.

Well, what were you able to do?

I tried running the processor at speeds like 429Mhz, but it didn’t like that idea and rebooted just before going into Windows. It was far more reasonable about a speed like 415Mhz and ran a couple days before spontaneously rebooting. Since spontaneous reboots do not make my day, I scaled back to 400Mhz.

So on first glance, it looks like it didn’t do much for me. But was that the fan’s fault? Remember, I have a PII with that pesky L2 cache. So, I disabled the L2 cache, and tried booting up, and was able to get to 450Mhz with no problem, something I hadn’t been able to do before.

So in my case, the fan did what it was supposed to do. It kept the CPU cooler so it could run faster. What the fan didn’t do was make my cache run faster; which is something it can’t do.

So, if you need an Athlon or replacement PII fan, this is a reasonably priced solution for you that gets the job done.

SUMMARY: CPU water cooling is tons more efficient and quieter than air cooling but carries a higher initial price and will require modification to your case. If you’re thinking of peltiers, it’s a must-have. This is my water cooled system