SUMMARY: GREAT clip – I hope we see more like this. 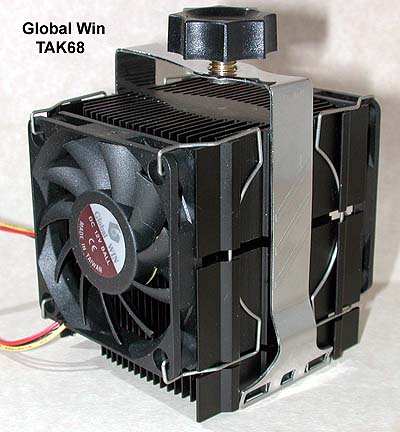 The good guys at Global Win sent over a sample of their twin fan model TAK68. It is an aluminum extrusion with a central core cooled by two fins blowing in. The airflow through the top is very noticeable – it moves warm air quite nicely away from the heatsink. 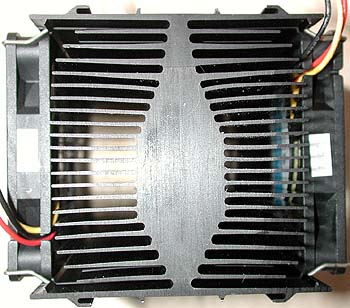 Note that this will not fit on a Celeron 1.2 – the base is too small.

is fairly smooth, although some lapping might improve performance a hair. Note that the CPU footprint will only accommodate a flip-chip design.

The fins radiate out from the center core, which runs the to the top of the heatsink, as shown in the pic above. This is why two fans are needed – each fan cools can only cool one half of the heatsink. 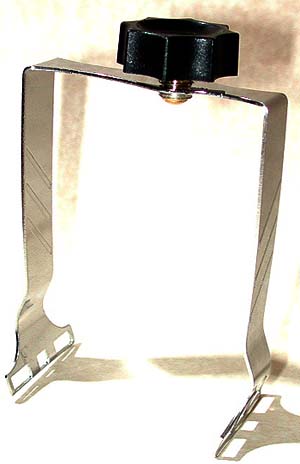 The clip – brings tears to my eyes. Why did we have to wait so long to see an innovative design that exerts a lot of pressure without risking core chipping? This is so easy to mount and dismount that it puts almost all the other clips to shame.

You can’t overtighten it – the screw only goes so far and that’s it. It also engages all available lugs on the socket – very secure and great if you’ve broken a lug. This is about as foolproof as it gets.

In addition, this clip proves to be a very handy pair of tongs to serve rolls: 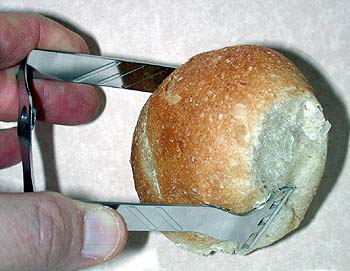 If you happen to need one in a pinch, the TAK68 clip can do the job (assuming the PC is off). I’ll bet Mrs. Andy Lin helped on this design.

The fans (Bi-Sonic Technology model #BS601012H) are not too noisy – I measured fan noise at 58 dBA (Radio Shack sound meter 8″ from fan intake). This is slightly less noise that a YS Tech 26 cfm. Note also that the fans are about 2mm off the fins – helps reduce noise.

Overall, the TAK68 is an innovative design with hidden benefits.

The TAK68 was first tested on the CPU Die Simulator which gives results that are unaffected by motherboard influences. I then tested it on a Shuttle AK31. Diode Temps were used in the motherboard test. I also tested the TAK68 with one fan off to see how much of a “safety margin” it has.

Even if one fan dies, it does enough of a cooling job to keep things under control – only 5C worse. Die Simulator results place the TAK68 in the mid rank of heatsinks (Heatsink Ranking).

Global Win’s TAK68 is not the best performer, but certainly does an OK job with the added benefits of a two-fan safety valve, decent noise levels and a clip that works very well serving rolls.

Thanks again to Global Win for sending this our way and to Mrs. Andy Lin for adding a nice touch.