UPDATE: I have been informed that Thermaltake has loosened the clip to make it easier to mount. I will test the latest version as soon as I get it.

Normally I don’t get too worked up about things, but this time I hit the wall. NATA Computers was kind enough to send us the Global Win FOP 32 and Thermaltake 462 heatsinks to test out. One thing I like about NATA – they tell us that “If it sucks, tell it like it is – we don’t want to carry garbage.” 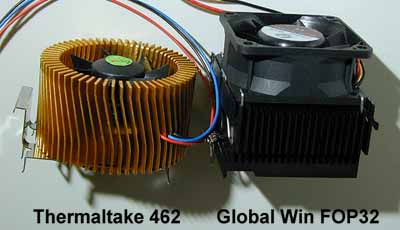 Now AMD FlipChips and Slot A boards are just starting to come out, so peripheral hardware like heatsinks are just now showing up in retail channels. I hope that Global Win and Thermaltake read this review very carefully, because any vendor that carries these heatsinks and any consumer who buys them should be warned as to what to expect.

I have four words to sum up what I found:

YOU MUST BE KIDDING!!

AMD specifies and states the following:

The clip load is greater than that allowed for previous processors with similar mechanical form factors. Table 2 on page 5 details the clip force requirements.

With the increased clip load requirements of the socketed processor,
emphasis should be focused on providing a clip design that is
easily installed. While clips that do not require tools for
installation offer some advantages, designs that accept a
flat-head screwdriver (or nutdriver) near the clip hook have
certain advantages. Such advantages include the ability to pry
the clip hook over the socket tab during installation and the
ability to install the clips onto the tabs in areas that are tightly
confined by motherboard components surrounding the socket.”

In what must rank as the most understated two paragraphs I have ever read in a spec, it is clear that heatsink manufacturers read the first paragraph and completely disregarded the second.

Mounting either of these heatsinks on a Socket A is, to put it mildly, physically challenging. I doubt that anyone can realistically mount these heatsinks inside a case without extreme duress. Forget about taking either one off while inside a case – they are on for life. The pressure required to secure the clip forced me to use a needle-nose pliers on each clip.

I was unsuccessful at getting the Global Win to mount successfully and I did not want to force the issue (possible CPU damage), so I did not test it.

Note that the Global Win clip is the usual flexible style seen on many others, while the Thermaltake is a rigid, solid and basically unyielding to pressure from mere mortals. After exerting what I felt was bordering on excessive force, I did get the Thermaltake on. It snapped on with a resounding “CLICK” that said “I dare you to take me off”.

Once on, I did test it by running my AMD 650 at only 800 MHz to see what it could do. It turned out to be a test of what the Thermaltake could NOT do – cool the CPU. After 10 minutes of Prime95, the CPU temp was 56C and climbing. I pulled the plug – no way am I going to use this.

I used the pliers to get the Thermaltake off and reinstalled water cooling; thankfully, I did not damage the CPU. Right now I am running Prime95 at 900 MHz, CPU temp 42 C, ambient 25 C – water cooled – after four hours. I will say, though, that the Socket A’s plastic lugs must be damn strong to take this level of pressure.

I think we have a real challenge on our hands.

AMD’s CPUs run hot. Overclocking AMDs can yield power outputs pushing 100 watts. I question whether Socket A CPU cooling by air is a feasible alternative. Maybe I’m too used to water cooled temps and low temp Intel FCPGAs, but even temps of 42 C give me pause. Supercooling at these levels will require lots of power.

Of the two heatsinks I tried out, I can’t recommend either one.

I touched on some of these earlier but I want to emphasize the following points:

I caution anyone considering a Socket A system: Be prepared to pay very close attention to cooling – it will be a critical factor determining what you can achieve.

I am indebted to NATA Computers for providing review material to us on a “tell it like it is” basis.

SUMMARY: Watch out copper; here come new waterblocks that can cool CPUs as well as you but at lower costs. Chip Eckert over at Overclock-Watercool sent me three very interesting waterblocks. The first one is a bored out aluminum block

ED Note: I have not tried this yet, so if you do, tell me how it goes – Joe I have an Alpha PAL 6035 heatsink with a 60mm Delta 38 cfm fan. This combo was mounted on a slotket