The Card Cooler kindly sent us the Global Win VOS32 triple threat CPU Cooler – it will fit PII, PIII or Athlon. You can configure it for any of these through some simple screwdriver mods – all parts and instructions are included. Making the required mods is straight forward, easy and the included instructions are clear enough. 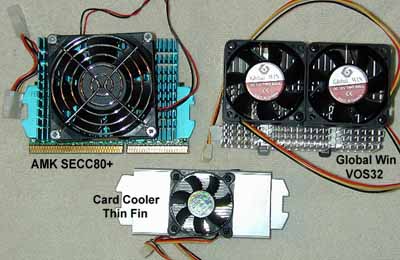 Note that the AMK has the PII 300 attached

The fans are the YS Tech 26 cfm units, so air flow is 52 cfm total. Noise levels are not as loud as I thought, I think due to the fairly unrestricted air-flow through the fins. All told, the specs are not bad. For testing, I used my naked PII 300 running at 450 @ 2.0 volts – giving me 33 watts to cool. I used Prime95 to task the CPU and Motherboard Monitor to record temps. I ran Prime95 until temps settled down, then ran it for 5 minutes, taking 500 1 second temp samples. The results are presented in the table below:

Cooling performance is quite good – the AMK was the “Non-Intel Approved” leader but has lost its crown to the Global Win VOS32. Performance is at the expense of size – the physics are really simple: The more cooling performance, the more fin area. The more fin area, the more bulk (at least for extruded aluminum heatsinks). I think the Global Win will see a serious threat from a folded fin heatsink; if designed well, it will give the same or better performance with less bulk, thereby not blocking DIMM slots.

In sum, an effective cooling solution – but check your clearances before buying.

PS: Tom Leufkens emailed me that the VOS32 does not fit the ASUS K7M without trimming off some fins, so it you are “Dremel Challenged” look elsewhere.

Last week, EK Water Blocks released what they are calling the most extreme fan to date with their EK-Furious Meltemi 120. Marketed for the higher-performance cooling needs, these 38mm thick fans may just be what you need.

SUMMARY: The Golden Orb is a capable heatsink and the PIII version should be a standout performer. NATA Computers was kind enough to send me an advance sample of the new PIII Golden Orb. We tested the Socket 370 version