SUMMARY: Looks like the performance race is on! Global Win’s latest is a good choice for Socket A CPUs, although the clip is a finger buster. 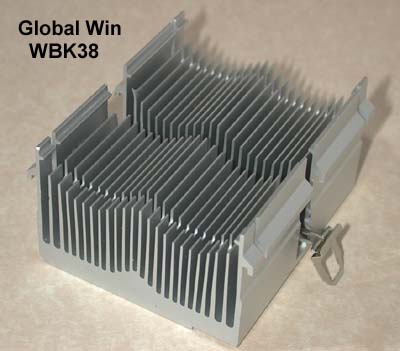 Heatsink Factory* sent us a review sample the Global Win WBK38, its latest entry in the heatsink derby. It looks like the successor to the aging FOP series, tests which reveal that the FOP series is falling behind current competition. 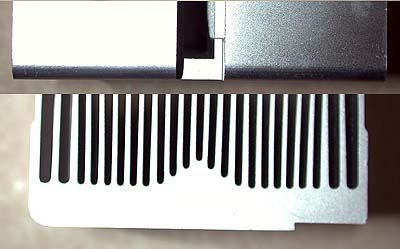 As seen from the two pictures above, the WBK38 is markedly different from the FOP; The WBK’s design features a hump in the middle of the base plate. Note also that the clip groove goes over the CPU core. The clip is the same one used for the FOP (although it feels a lot stiffer) and is a finger buster; I used a needle nosed pliers to mount it on the socket.

The WBK38 ships with a Delta “black label” fan with a finger guard; seems like we’re seeing more guards on these fans which may speak to mangled fingers on the part of some users. In addition, it comes with a four pin adapter so it can be powered directly by a hard drive plug; some motherboards can not deliver the watts to fully power the Delta, and some fan headers burn out after a while if they are over-stressed.

I prepared the WBK38 by boring a hole through the base so I could epoxy a thermocouple above the CPU. The thermocouple is attached to an Omega HH23 Digital Thermometer. Ambient temps were measured with a thermocouple placed about 1 inch from the fan’s intake. I used Prime 95 to stress the CPU on an ABIT KT7, running a Duron 800 @ 1000 (52.6 watts). The Duron is actually a more severe test as its area is less than the T-Bird, so there is a higher watt loading by area. Arctic Silver grease was used in all tests.

Very good performance, although noisy. By mounting the fan above the heatsink’s fins, Global Win reduced the noise somewhat but, IMHO, not enough. The Delta 38 is inherently a noisy fan, as you would expect from something spinning around 7000 rpm. However, C/Ws below 0.25 are now the performance bar for any heatsink in the Socket A market and about the only way to get there with a 60mm fan is with 35 cfm or more. Larger, quieter fans will most likely be the next step.

The Global Win WBK38 is a solid successor to the now dated FOP series. If you can stand the noise, it’s a good choice. Looks like the 38 cfm fans are now the “standard” choice for performance heatsinks, although I’ll bet a lot of users dump them after a while.

Thanks again to Heatsink Factory* for sending us the test sample.

*Heatsink Factory is a direct advertiser on Overclockers.com.

UPDATE 8/25/00: A lot of people want to know details on my water pump. I purchased a Rio 180 at Reef Fanatic and it’s 120gph. To mount the water block I’m using zip ties and 2 metal thingies I made

A Bud, A TEC and Thou