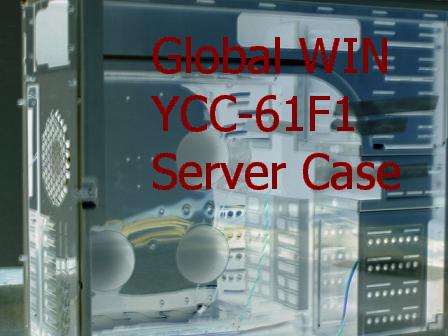 The Global WIN YCC-61F1 Case originally piqued my interest with its refreshing cooling design: two 120 mm fans, one intake in the front of the case, and one exhaust at the back of the case. After tinkering with the case and installing my hardware into it, however, the innovative fan configuration was simply a prelude to the creative modernization of the rest of the Aluminum and Stainless Steel YCC-61F1. 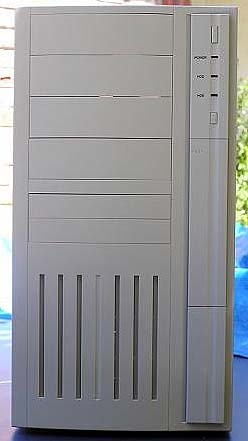 Okay, the front bezel of the YCC-61F1 may be a little dated, but it’s not ugly by any means. I’m not sure Global WIN chose to use a plastic face plate on a brushed aluminum case, but a representative there assured me that Global WIN’s design team was hard at work on a new faceplate design to replace the current 61F1’s aging mug.

This case’s current faceplate has the standard power and reset buttons along with a power LED and 2 HDD LED’s. The extra LED was obviously added for use with servers, but is equally useful in any desktop system with two hard drives. 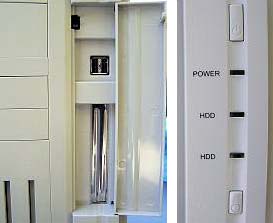 Hidden behind the hinged door on the right side of the 61F1’s front bezel are two USB ports and one of the cases more innovative features, an expansion slot.

The YCC-61F1 also comes with one of the coolest looking plastic windows I’ve ever seen: 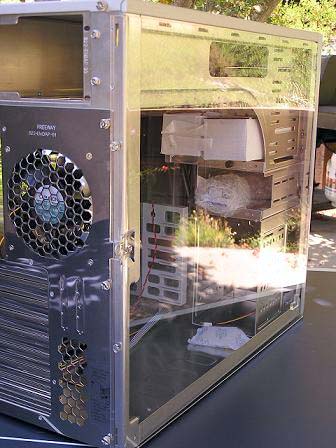 Unlike other more conventional windows that are cut into the side panel of a case, Global WIN’s window is the side panel of the case! The fact that the entire window is plastic makes it fragile, however: initially, our sample window was cracked during shipping, but Global WIN was nice enough to send us a new one right away. 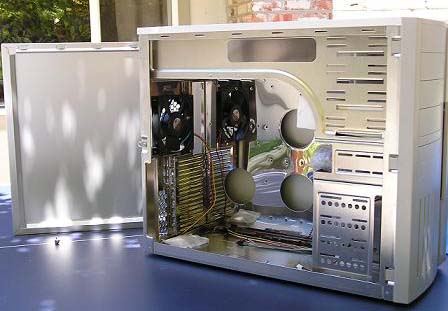 An innovative exterior isn’t worth the ~$150 it costs to buy a 61F1 if the inside of the case isn’t equally as creative. Fortunately, Global WIN’s aluminum wonder is filled with refreshing innovation and creativity. 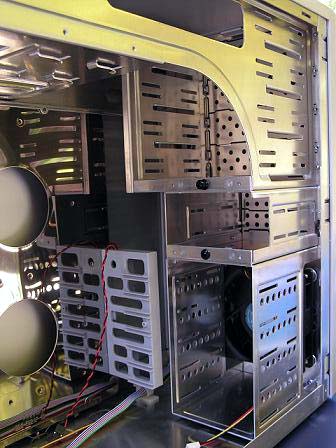 The 61F1’s 4 x 5.25″ and 7 x 3.5″ (2 external, 5 internal) aluminum drive cages are sturdy (no flexing) and fit their respective drives very well. Both 3.5″ drive cages can be removed to improve airflow and salvage extra space in this continent-sized case. The 6 external drive bays have aluminum “punch-outs” that can be removed effortlessly and without leaving behind sharp, dangerous metal extrusions.
{mospagebreak} 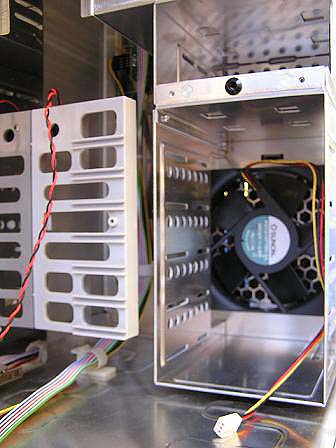 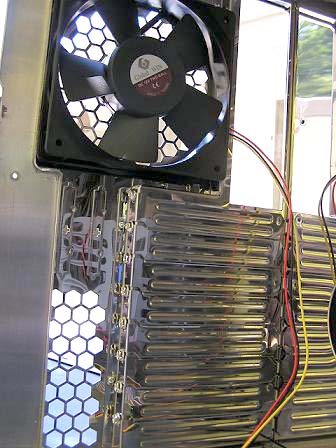 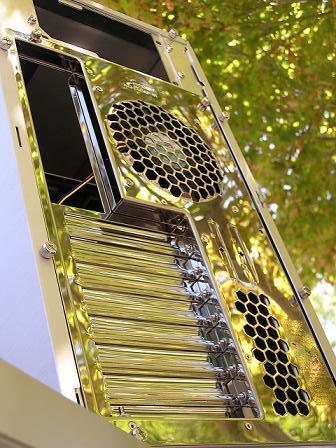 The YCC-61F1 again shows its server case roots in its obnoxiously noisy 120 mm Sunon ball bearing fans. Not only are these fans unbearably loud at 12 volts, they also don’t get any quieter when undervolted to 8 volts and turn off when turned down to 7 volts! 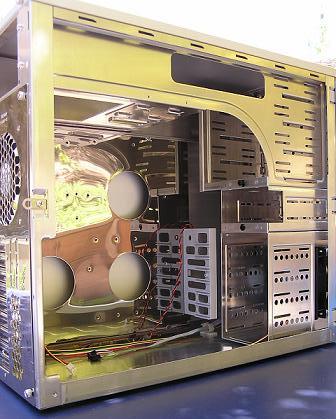 Like most high-end aluminum cases, the 61F1 has a stainless steel sliding motherboard tray to make installing motherboards and video cards much easier. What makes Global WIN’s motherboard tray so unique is its three large holes for airflow. Unfortunately however, these holes haven’t made much of a difference in my CPU temperatures.

Global WIN’s creative case comes with a useful digital thermometer that’s powered by a Molex connecter. Its LCD panel can display temperatures in either Celsius or Fahrenheit, and its probe can be placed anywhere in the case.

The 61F1 also comes with 4 51 mm wheels for the convenience of mobility, if your case is loaded with heavy components like hard drives and optical drives.

Global WIN has made incredible progress with its YCC-61F1 aluminum case. It may not be pretty, but it’s so radically innovative and different on the inside that the 61F1’s looks can be easily overlooked. It’s simply better than any other case I’ve ever used; however, I would like to see some sharp edges around the drive cages and motherboard tray eliminated.

In the words of my exceptional photographer, Eric Lowe:

“um… well I pretty much told you everything I thought. The front looked kind of outdated, the plastic side looked really cool…. the fans were extremely loud.. um…..well, I didn’t really try but it kind of looked like it would be kind of hard to put a PSU in because of the… I dunno, metal parts up there.

[it’s not hard at all, Eric. In fact, installing the PSU into this case is easier than in most other cases]

I liked how they gave you wheels to put on the bottom, though. I’m sure there were other good things about it but I can’t really remember. Overall though, it was a pretty good case and I would probably buy it if I didn’t already have a case.”

Is Intel’s adaptation of x86-64 technology (and no matter how Intel tries to spin it, that’s what it is, outside of items like SSE3 and hyperthreading which Intel implemented long before this move) a victory for AMD? Depends on how Read More

For the last few hours, I’ve been getting one of these rather often. —– Original Message —– From: “Michael Joaquim” To: (lots of people, including unfortunately me) Sent: Sunday, July 13, 2003 12:53 AM Subject: Katie Cooper Benefit Katie Cooper.tif Read More