Well I’ve already done water cooling, but I just love air cooling’s simplicity. I thought I would take a good heatsink and make it better. The Globalwin TAK68 is a great cooler. It already scores 0.41 C/W on the Overclockers.com heatsink rankings with its dual fans and low to moderate noise level. It is quiet and excellent for an all aluminium cooler, but what it lacks is a bit of copper.

Hokey dokey then, let’s fix that!
The Mod

Firstly, I machined a copper rod. I wanted to get the sides a smooth as possible for a good fit, then drill and ream a hole in the heatsink for a tight fit. 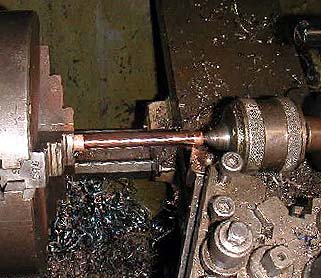 Here’s the bits at the start with the nicely machined copper rod insert. I would have liked the copper rod to be a little bigger in diameter, but when it’s free I can’t be too choosy. 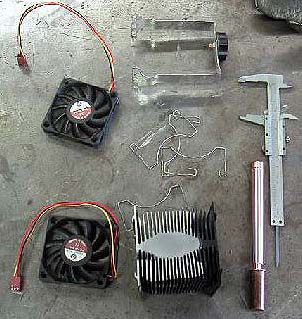 Next, I drilled a pilot hole through the heatsink in the correct place, right where core imprint of the CPU could be seen. Next, I drilled to size and finished off with a reamer to smooth the hole sides, to make sure it’s nice and round. 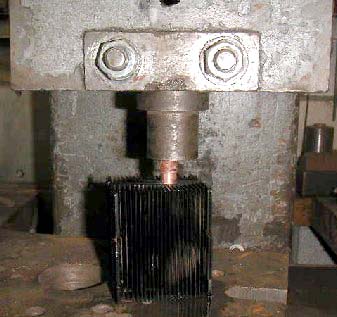 Yep, tight as a nun’s bum. OK, cut the extras off and feed it to the belt sander – this will save a hell of a lot of lapping later.

Nice and flat, and nearly finished. 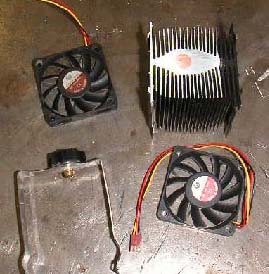 Put it together and race home and do some lapping. I just can’t wait to test this puppy out. 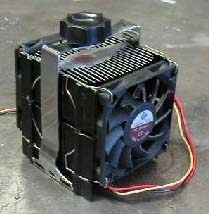 A quick lap, and I’m ready for testing. 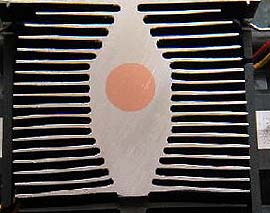 Looking good, that TBred’s pretty close to the middle. 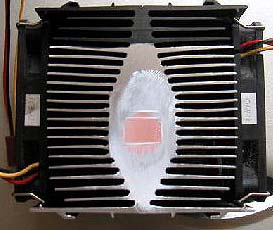 OK, so after a few hours of testing here are some results. I used a simple calculation tool here to work out the C/W ratings.

My Volcano 9 (V9) was used for a comparison:

Quiet, about the same as the V9 on low, maybe slightly louder.

Tests were done with a TBred-A 1800 @ 1835 MHz and 1.68v. Case temps were fairly consistent at 32ºC, with ambient in the room at 26ºC as it’s summer here down under in New Zealand. Temps were at full load after running SiSoft Sandra Burn-in for 15 minutes each time.

Well, the results speak for themselves – absolutely awesome and at least 3ºC better than the temps I would have gotten before. It’s now a top cooler in my books for performance, while being quiet at the same time. Anyone want to buy a cheap volcano 9? 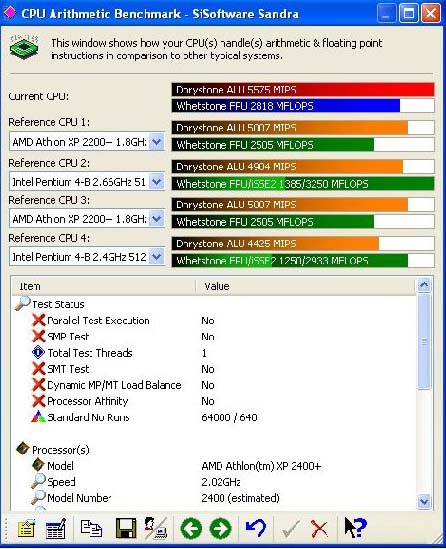 Well, 2021 MHz is a good result, considering this a low noise air cooler. I can now overclock higher and still watch TV or sleep at night with the computer on.

Next, maybe tomorrow I might install my water cooling setup, with my custom built 100% copper radiator, and see how it compares. Hmm, haven’t played with that for at least a year.

Nigel Hulse – aka Deviant in the Forum