SUMMARY: A solid performer on par with high-performance heatsinks but not an HP Polar Logic. However, shearing off a socket 7 lug is a distinct possibility.

NATA Computer Technologies was kind enough to send Overclockers.com a test sample of this attractive looking CPU cooler. It echoes the lines of the nifty HP Polar Logic (see picture below) which cools as well as the Alphas. We put the Golden Orb to the test to see if it could equal its look alike. 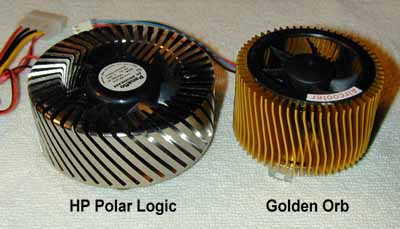 Mounting the ORB is the one area that demands caution – it does take an unusual amount of force to twist it onto the socket 7’s lugs. Unfortunately for me, my first attempt at mounting this to a Celeron 433 resulted in one of the socket’s lugs shearing off. Thankfully it was a cheapo slotket. The lesson however is obvious – mounting the ORB is not for the faint of heart or weak of wrist. It is also possible to use the ORB perfectly well without twisting it all the way on – this is what I did with the C433, as I was not going to kill off another slotket.

I think this is due to the clearance needed to mount the ORB on CuMines; the slug on these are not as tall as the Celeron PPGAs. I had no problem using the ORB on my 500E. Hey, maybe I had a weak lug as I use these a lot for testing, but that’s what happened to me. Just exercise some caution and maybe put a swipe of oil on the mounting bracket – shown below. 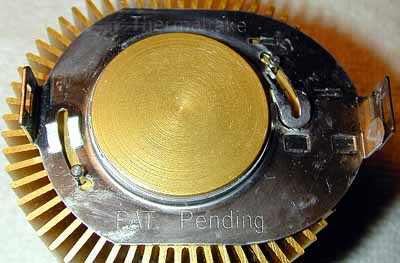 One other point – the wire on this unit is shorter than most I have seen. If you want to use a fan connector more than 5 inches (13 cm) from the ORB, you can’t make it. Usually the connector is something like 10-12″ (25-30cm) from the fan. The connector is a 3 wire so you can get tach readouts. One important consideration in the ORB’s favor is that it is not so tall as to block DIMM slots.

I used the ORB with a Celeron 433 and a PIII500E @ 667 MHz. I used Prime95, letting the temp stabilize and then using Motherboard Monitor to take 500 one-second samples. I threw in a couple of Global Wins for comparison purposes. The table below gives the results:

No slouch – beating the Global Win FDP32 is no mean feat. This surprised me because the ORB’s base does not contact all of the Celeron’s slug – albeit a small piece. Compared to the Global Win FKP32, the ORB is just about dead even. In sum, the ORB is a fine performer and can stand head-to-head with any other heatsink except the Alphas.

In addition to my look at it, Andrew Kenton serendipitously sent us his experience with the ORB:

I just wanted to give folks some input on the Golden Orb and my PII 500E overclocking adventure.

Upon opening the cooler and giving it the once over, my eyebrow cocked as I turned it over and looked at the mounting bracket, “Hmmm”. As I played around with it, I tried to twist it into its “mounted” position. I repeat, TRIED…WTF?!? I nearly cut myself to shreds as I wondered what sort of Herculean strength would be needed to twist this thing into its proper position. I was ever-so-close to calling the vendor and asking that very question when I was distracted by my naked, freshly lapped, Celeron 366 PGA.

I think it was a blinding reflection off the copper, actually. Anyway, I grabbed the Celery, one of my Slockets, grease, etc, and got down to work. I, like so many others, became flat out frightened by the force needed to twist this thing into position. Then POP, and it was on… I quickly inspected the rig to see if anything POPPED off during the adventure… Whew… All was good. Time to wipe my brow and get dinner.

When I returned, I just had to know, “What exactly would it take to remove that sucker”? I was surprised to find out that it took me far LESS pressure to twist it off than on. Due to the fact that I was working on a slocket, I was able to take a good look at what I was doing. I tried mounting again. “Damn, what’s with this thing”? Then I saw it!

I found that with the heatsink in place, and while exerting pressure to twist, the two little guide tabs on the mounting plate were catching the fins of the sink! Once I realized this and used a small screwdriver to lift the bracket while twisting, things went MUCH smoother. It still took firm pressure, but it was no longer SCARY, firm pressure. Ahhhh, much better.

Now, I know that, due to the mounting bracket, it may be unsuitable for FC-PGA Pentium III’s. However, I was starting to like this little cooler. I decided to give it a go on my PIII 500E with an Iwill Slocket II. With the zinc oxide on both, and watching and lifting the bracket off of the fins, I was no longer terrified by the pressure needed to twist this onto my FC-PGA Coppermine.

Once in place, I found this sink/fan IDEAL for the Slocket set up. It was on there, it was square and I had NO concerns that, once it was in the vertical, gravity would work its evil magic. This thing was not going to lean or pull away like all other 370 coolers I had tried without modifications. No way, No how. “Sweet”. Time to test it real world – my system:

I installed the Slocket/Coppermine with Golden Orb without fear of knocking the heatsink off of alignment. Once installed, I kicked on the power. I was happy to see everything functioning as usual. I normally ran this system at 600 MHz using the stock Intel heatsink and fan. I started Motherboard Monitor and was very pleased to see a dramatic drop in temperature – it was running about 10 degrees cooler than usual, about 20 degrees C. I started [email protected] and was surprised to see that the temp fluctuated between 20-22 degrees. (Most often pegged at 21C) After about an hour, I decided enough child’s play… It’s time to see what this puppy can do!

I started stepping up the FSB… 620 MHz, 665 MHz, 700 MHz – all looked well entering W98 at 700 MHz. Temp was about 27C, but when I attempted to run 3DMark2000, the system came to a screeching HALT…Damn… The TNT2 wasn’t liking the AGP bus speed at all. I rebooted and tried again to no avail. Time to start messing with Power Strip!

Now this is territory that I am not very familiar with. I don’t know what people are successfully O/C’ing the Viper 770/TNT2 at, but I decided to wing it. First I tried O/C’ing the RAM and 3D Engine clock. I took the Memory up to 190 and the Engine to 165, but I still had no luck. I stepped it up to 200 and 175… Hmmm, no dice… I’ve been reading the articles on AGP aperture size (Set at 256), enabling/disabling sidebanding, locking down to 1XAGP, etc, and they have been very inconclusive.

Most seem to think that all in all, it varies greatly from system to system, and those settings seem to be making very little difference. I don’t agree, but I can only tell you what has worked for me. I took a shot that the card was having a problem syncing correctly with sidebanding enabled (Thanks for the interview with [email protected] Dan!) due to the accelerated bus speed. I begrudgingly disabled sidebanding in Power Strip.

I did leave the Memory at 200 and the 3D Engine at 175. I was wondering what kind of performance hit I was going to take, that is if I ever got this thing up and working at 700 MHz. Reboot…Run 3DMark2000…What’s this?!? The app started! OK, I started the benchmarks looping… Three passes later, I got impatient and had to try this out in some real live Counter Striking! After a few hours without so much as a hiccup, I decided it was time to begin stepping up the FSB again. (In my delirious haze I did completely forget to get a temp at 700 MHz running [email protected]

I jumped straight into a FSB of 150 MHz, for a grand total of 750 MHz. Everything was going great until about 10 minutes into 3DMark2000…Splat! BSOD! Argh! At first I thought that I had pushed beyond the limits of the TNT2 Ultra, and then I realized I am trying to run at 150 MHz FSB with generic PC 100 RAM! Ahhh, time to break out that gorgeous stick of Enhanced PC133 SDRAM that I keep around for special occasions.

I powered off and yanked out the 2 generic DIMMs, threw in the 128 MB of ESDRAM, rebooted and ran my [email protected] first this time for about nearly 30 minutes watching the temp climb to a whopping 26-27C (Nice, Go Golden Orb!). Ran 3DMark2000 with my fingers crossed so tightly the bones almost snapped! After 5 loops, I declared myself triumphant over what evil demons were attempting to posses my system and keep me from 750 MHz! Oh my…Do I dare push this mobo to its uppermost limit and try for the once thought impossible goal of 775 MHz?!?

One more stepping up the FSB ladder landed me smack in the middle of 775 MHz bliss. I ran [email protected] for about 30 minutes this time. Never did I see the temperature rise above 31C. That was one degree less than the typical temperature I saw at 600 MHz with the stock Intel heatsink and fan. I ran everything that 3DMark2000 had to throw at it, ending up with a score of 3822 3D Marks.

Time to sleep…and sleep I did. All the while dreaming of a PIIIE FC-PGA Coppermine O/C’d to 1005 MHz and grinning an evil grin! It has been 4 days since that night, and I have yet to reboot my system! I have played COUNTLESS hours of Counter Strike (and a couple of UT). I have been running [email protected] as my screen saver (So that it taxes the CPU at nearly all moments when not in use.) I run all of my everyday apps without a hitch. Remain connected to my ADSL provider flawlessly. According to Motherboad Monitor the AVG Temperature has been 28.96 degrees C.

So, what is there left to say? Only, that I am extremely happy, no thrilled, with the Golden Orb! Once you get past its freaky little quirks, it’s awesome. This Soyo 6BA refuses to run with RAM missing from the first DIMM slot. The Golden Orb is the first air cooling solution that I have to offer this type of performance with such a small footprint (Not to mention, the $15 price tag). Using a Slocket, all other after market solutions slipped or tilted away from my FC-PGA Coppermine. Not the Golden Orb…

I know there are some that will be unable to use it because of its width, but it works great with my Iwill Slocket II and my Soyo mobo. I mean, damn, a PIII 500 O/C’d 775 MHz air cooled and rock stable with all DIMMs free for $15… It’ll do…