Well, I guess that I started just like all of you overclockers out there. When the first pushable chips
came out, I have been trying to push the chips to
the max, any time that I could. Well, my latest
project is to take an AMD 1.3 thunderbird and
try to push it to around 1.6 or higher.

The first
thing that I did was to read all that I could about
overclocking on Overclockers.com. Then I saw
all the articles on water-cooling. I thought to my
self “Hmmm.. What a concept!!”

I set myself a goal to try and find as many of the
parts that I could right here in town. And much to
my surprise I found EVERY thing except the
cooling block. Here is an list of the parts that I
used: 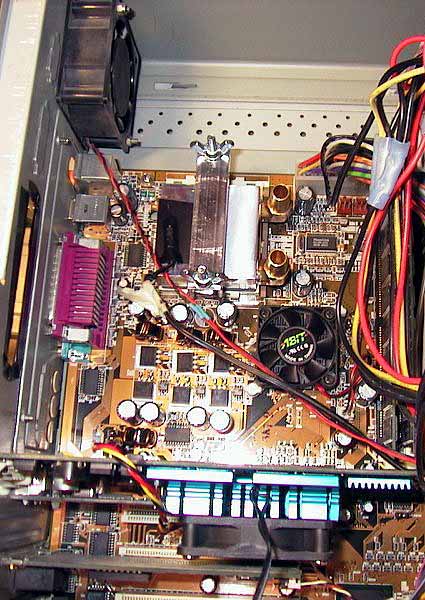 As you can see above, I mounted my
cooling block to the chip and motherboard using
2CoolComputer’s mounting strap. I also mounted
a thermal sensor from my bay cooler. 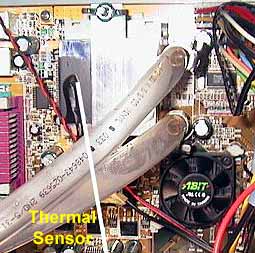 Here you can see the cooling hoses attached
to the cooling block. And for a little more insurance, I also used hose claps. In fact, I used hose clamps on all of my connections – better safe then sorry, I always say.

So far, my cooling system is just like all the rest of them. But I went a few steps farther. As you know,
the purpose of water cooling is to lower the temp of the chip, right? Well, how about also lowering the temp of the case too?

That’s why I decided to put the rest of my system outside of the case. It actually lowered the inside temperature by 35 degrees F. I really did notice a big difference in the performance of my computer. It
Also helped lower the temperature of my video card, a Hercules 3D Prophet 2 GTS 64 meg. Note the
heatsink and cooling fan mod that I did below. I mounted a heat sink from a Pentium pro and a bigger fan. Lower my temp of my card by 25-35 F. 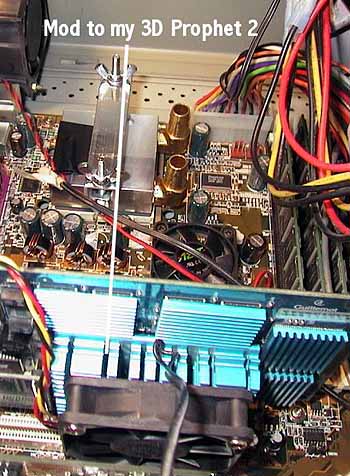 Here’s a picture of my outside cooling unit. The base and all the mounts are made of Plexiglas that I had laying around the house. The rest of the pictures are self-explanatory. 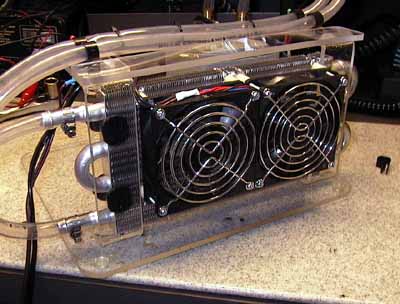 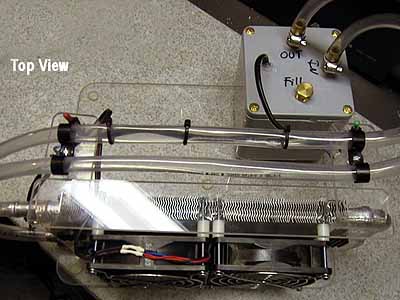 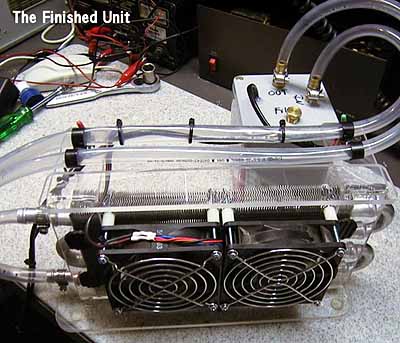 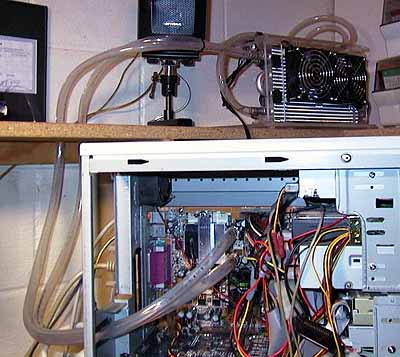 I thought about playing QUAKE 3 or UNREAL TOURNAMENT GOLD. But I went on step farther. I thought to my self “What would really push the chip?”
I Finally came up with 3D Benchmark 2001. It would make the strongest systems beg for mercy! Well, after benchmarking about 15 min or so,
I checked out the temp. Well, much to my surprise – only 115 F! And talk about some awesome frame rates!

Now to the part that hurt the most.

I’m sure that you all have had it happen to you one time or another:

That’s right, My $145 AMD 1.3 GHz. OUCH! What a setback! That is why I am now running an 1 GHz – I couldn’t afford another 1.3. I’m not sure of the reason; either I tightened the holddown too much, or the bad design of hold down was at fault. Either way, it broke the hold down tab on the socket; either way, I was out a 1.3 GHz chip and a big hole in my wallet. 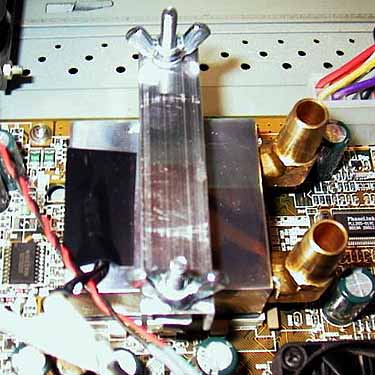 Well, not to get too depressed about the chip, I found a new way to mount the cooler to the chip, I found it while I was reading through Overclockers.com. Good ole Plexiglas, as you have seen done before. Well, I can tell you that it worked GREAT!! 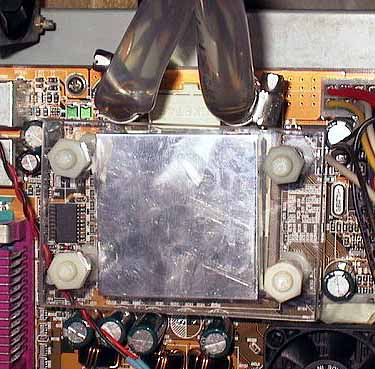 Out, Out Damned Heat

"Out, Out Damned Heat!" by Joe Citarella 10/15/98 There is no question that heat is the overclockers enemy. In chasing this demon, many employ the number one talisman – the 80 mm case fan. This is one area where the

The good guys at nPowertek were nice enough to send a sample of their NPH 775-140 HC heatsink. This features 104 aluminum fins with a 33 mm copper heatpipe core.

I just read your article on the Peltier Radiator and found it interesting. I have some input on the results of your experiment. I have a background in mechanical engineering, with specialization in HVAC (Heating, Ventilation, and Air-Conditioning). For the