SUMMARY: Not for serious cooling. 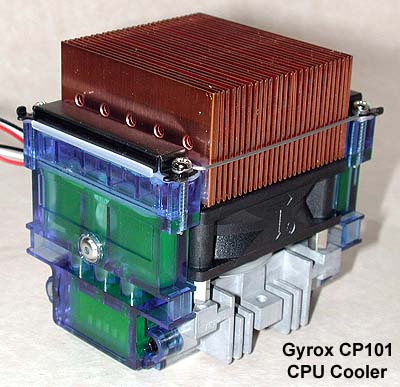 The good guys at Xoxide.com were nice enough to send a sample of the Gyrox CP101 CPU Cooler. I’ve received a number of emails requesting a test of this product, so I am grateful to Xoxide for sending one to us.

Normally I don’t “cut and paste” specs, but in this instance, I will for reasons that will be apparent as you read on:

If you know some simple heatsink basics, you can guesstimate what to expect of a heatsink’s performance.

Assume you had a chip that radiated 80 watts but was the size of a page – 8½” x 11″. Evenly spreading 80 watts over this large a surface decreases the cooling task such that radiant cooling would suffice. Since CPUs are not this large, a heatsink attempts to transfer CPU heat as efficiently as possible to a much large heat dissipator.

Heat transfer these days, with CPU die size shrinking and power increasing, dictates a copper based solution. Aluminum was fine maybe three years ago, but is not in the running today. The Gyrox’s base is aluminum. Off the bat, a performance compromise.

Transferring heat using water is an efficient way to move heat from the fingernail-sized CPU core to a heat dissipator.

The heat dissipator in this case is a copper radiator. Look closely at the product picture – how big is it? It’s small – period. Small radiators, as we’ve seen in many tests, compromise performance.

Look again at the Gyrox pic and guesstimate what to expect.

The aluminum base is well finished: 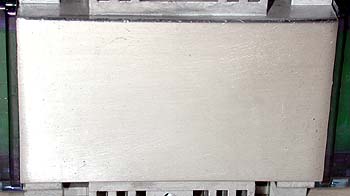 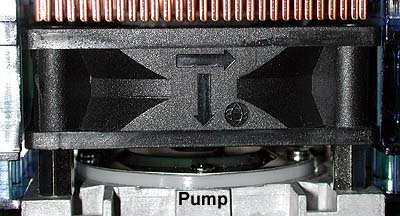 which moves fluid from the aluminum base to five small tubes 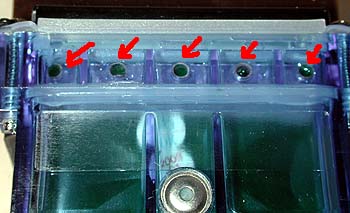 which are cooled by a copper finned radiator. The fan pulls air through the radiator.

The Gyrox ships with parts 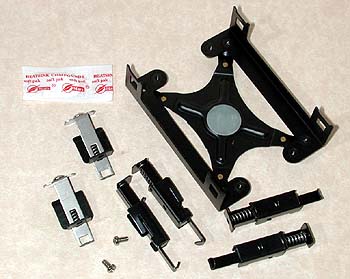 for either Socket a or P4 use. For Socket A, two spring loaded clamps attach to the base: 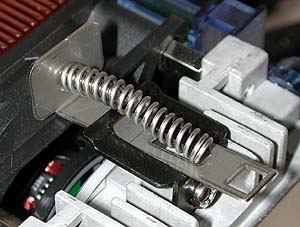 Note that for Socket A use, the CPU core is off center – the grease pattern on the die was uniform, however. For P4 use, for spring loaded clamps hook to the supplied retention bracket.

The Gyrox was first tested on the CPU Die Simulators which give results that are unaffected by motherboard influences.

Die Simulator results place the Gyrox in the lowest rank of watercooling solutions tested to date (Heatsink Ranking). I have no idea how Gyrox tested this heatsink to get a C/W of 0.18.

The Gyrox CP101 CPU Cooler is one of the worst I have ever tested. It can make a great conversation piece for a geek’s coffee table or a paper weight.

Thanks again to Xoxide for sending this our way.

¹An exception might be if you sank a radiator deep into the ground – for all practical purposes, the earth is doing the cooling.

A classic heatsink design marred by a less than stellar base finish. — Joe