[ED NOTE: BP6.com apparently posted this awhile ago, so I am including a link to it. Thanks to LM for pointing this out.]

Let me start out with all the disclaimers that I feel I have to include:

First of all, there are many, many dangerous things about doing this, and this WILL VOID YOUR WARRANTY. And it is very easy to kill your hard drive. So much as one microscopic spec of dust can ruin your hard drive permanently. This is a very hard mod and not recommended for those of you who are fairly new to modding. Other than that, let me finish by stating YOU are responsible if you try to do this. Neither I or Overclockers.com can be held responsible for your actions or mistakes. 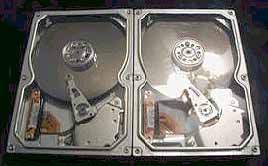 With all that out of the way, let me say that I personally think that this is one of the coolest mods that you can do. Watching the platters and the spindle moving is hypnotizing. Ever seen a snake strike? You know how they move so fast that you feel like you didn’t even blink and it moved? Well that is what the spindle of the HDD does. It moves from one side of the platter to the other and you didn’t even see it go. Anyway, enough talk – lets get to it.

Here is what you will need: 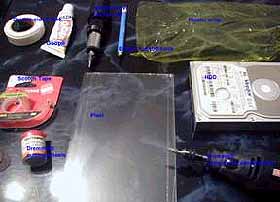 The blue you see there only lists the item.
Part I. Before You Start

Right now you need to have a few things in order before you even touch the HDD.

First of all, you need that sheet of plastic wrap (not the plexi) – make sure it is a bit larger than the HDD. You’ll need that knife to cut a “void your warranty seal”. And you’ll need that Torx bit with the screwdriver attachment. And finally, and this may sound strange, you need to go in your bathroom and clear off a space to do some of this mod on.

Then, turn your shower on real hot and let it run for a while with the door shut. This raises the humidity in the room and effectively pulls the dirt floating around in the air to the ground. This is as clean as the air will get. Just make sure it isn’t so humid that there are little drops of water floating around and you’ll be fine. Once it is fairly humid, turn it off and wait just for a little while for all the water droplets and dirt to settle.

Now you are ready to perform surgery on you HDD. Take it into the bathroom, cut the seals and remove the screws. Don’t take the cover off yet. Get that plastic wrap ready in one hand; as soon as you remove the HDD cover, put the plastic wrap over the HDD so you’ll have some sort of cover on it to protect it. It should look something like this: 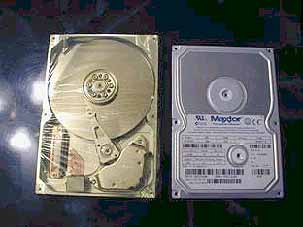 Now, just put the HDD in a safe place, preferably out of the bathroom because, at this point, it should be protected and humidity wouldn’t be the best thing to have it sitting in for a long time. 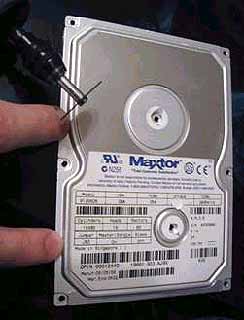 Decide what the best cut will be for your cover. I chose to cut around the metal shielding plate as seen above. Just make sure that you leave a little lip to glue and seal the plexi glass window in there. When cutting, be careful on the corners. It’s easy to break a fiberglass cutting wheel when you place too much pressure in the wrong direction.

Part IV. Removing the Cover and Starting the Window.

At this point you need to hook up your sanding bit, clean off those little metal shards and smooth the edges of your newly made window frame. It should look something like the picture above. Although this is a mod and it will look however you want it to look – all HDs are different.

If you are brave, very brave, you can cut designs in it – but it’s your funeral. Anyway, now it’s time to cut your window. What I did was use the piece of the window I had just cut out as a template. 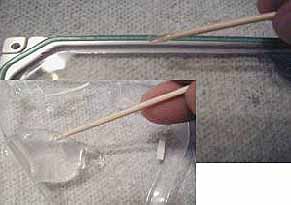 Just be very careful when cutting plexiglass because it is very easy to break it in the wrong direction. Now at this point you can fire up the Dremmel ® with that sanding bit and clean that plexi up a little bit. You can try to see if it fits in the frame – if it’s a little too big, you can sand that part down until you get a perfect fit.

With that done, it’s time to glue and seal the plexi in the frame. Make sure to remove the plastic covering that protects the plexi before you glue the plexi in. As seen below, I used a toothpick to glue the plexi in; just hold it down, be very careful, use plenty of glue and it should be sealed and glued just fine.

With it glued and sealed it should look something like this: 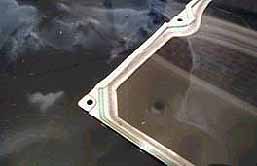 You’re almost done, but not yet. Now I put the window on the inside of the frame cause it just looks a lot nicer. The problem with this is that you have to raise the level of the cover on the hard drive so the plexi won’t touch the spindle. This can be tricky, and is the make/break part of the mod.

What I did was use double-sided tape to make a “gasket” around the edge of the frame. I used the double sided tape with the foam material between the tapes. This serves two purposes: One, to protect the inside of the hard drive from outer contaminants, such as dirt and things. Two, to raise the level of the frame so that the plexi doesn’t come into contact with the spindle. 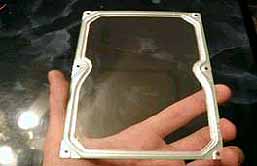 The picture above is what the frame looks like before the “gasket” is placed on, but more or less what the final product looks like. The first picture on the left is a close-up of the frame with part of the gasket on. 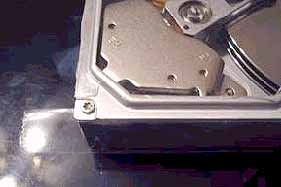 Very quickly and carefully, put your new cover on the hard drive. Make sure you line up the screw holes. Be very sure to not tighten the screws on the hard drive too tightly, otherwise your gasket will serve no purpose. If you screw it down too far, when you turn your hard drive you’ll hear the terrible sound of a spindle cutting into plexi.

I’ve done this and the biggest problem is that it will cut little plexi particles off and fling them around onto the platter; at that point you can cry and kiss the drive goodbye. If it makes you feel more comfortable, you can try to find some sort of extra material to help keep the cover of the HDD off the spindle.

Finally, you need to pull out that Scotch ® tape and tape up the sides of the HDD like in the picture. This is very important to keep the HDD clear of foreign objects. 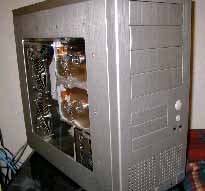 That’s it! You should have a beautiful, working, windowed hard drive. Hopefully you made it through without incident.

In the future, I may add an LED mod to this How-To-Do. Just keep in mind that there are some very sensitive parts inside your hard drive, and doing this mod exposes all of them. Long term, your hard drive is not shielded nearly as well anymore and should be treated with as much care as possible. 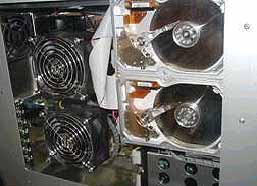 Finally, I would also like to say thanks to my roommates Mark and Ben, because with them they made this mod a whole lot easier. Originally this was Mark’s idea, and he got some ideas from someplace online that isn’t there anymore [NOTE: BP6.com did this awhile ago], so I would like to give credit to my roommate and whoever has done this before. If you have any other questions, feel free to Email me.

Good luck with your mod!

Quiet Your Computer… With Carpet

Shuttle uses Intel’s Atom 330 for a touch screen PC while Microsoft sees netbooks at $200 by year-end.

There are some people out there who just don’t like computers. They hate them. Hate them so much that it warps their minds and memories. Most commonly, you see it from those who want to ban violent video games, but