SUMMARY: Heatpipes and Thermosyphons are variations of two-phase cooling systems.

A number of readers have asked me to explain how heatpipes and thermosyphons work and to compare the difference between them.

Both heatpipes and thermosyphons dissipate heat by allowing a liquid to boil into a gas, then condense the gas back into a liquid. The liquid then returns to the hottest point and vaporizes again. This cycle continues for as long as heat is applied. The two phases are liquid and gas.

Both systems are passive in that no pump is used. The cycle is self-sustaining as long as the temperature differential is sufficient to continue the cycle. The following diagrams visually show this process for heatpipes: 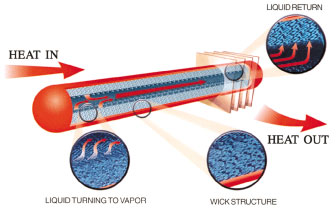 The process is similar for thermosyphons with one exception – thermosyphons do not use a wick structure, typically a metal foam, inside the tubes. The liquid inside the heatpipe seeps into the pores of the wick material. When heat is applied at one end, the liquid boils into a gas, picking up heat in the process.

The gas then moves to the cooler location in the tube and condenses, and in the process dumps its heat at that point. Now a liquid again, it seeps back into the wick material and the cycle continues.

Very simple in concept, very difficult to implement as there are tradeoffs in pore size, liquids, tube size etc.

The main difference between heatpipes and thermosyphons is that thermosyphons typically are built without a wicking material; the pipes connecting the boiling point and condenser are smooth. In this respect, the thermosyphon is simpler to build.

A second differentiation is that most heatpipes used for CPU cooling are rigid, fixed copper tubes -Thermaright’s XP-90C is a good example: 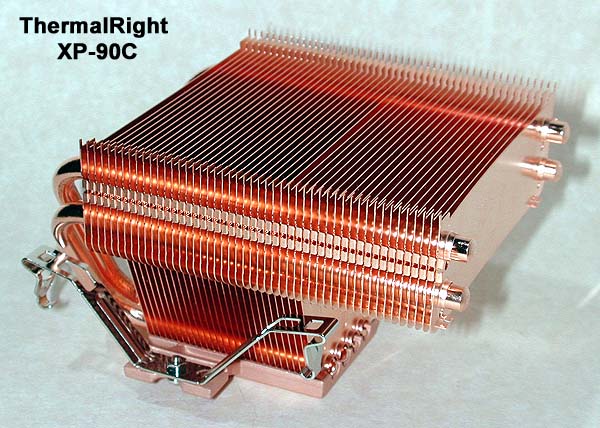 Heatpipes can be built such that orientation is not a problem, although those used for CPU cooling are typically designed to work with gravity; thermosyphons use gravity to transport liquid back to the boiling point. It is possible to design thermosyphons that work against gravity, but the complexity significantly increases cost.

One other major difference between the two is that heatpipes generally are rigid tube structures. As in Thermalright’s XP-90C, the pipes are press-fit or soldered into a base which contacts the CPU. A thermosyphon uses a boiler which is analogous to a waterblock. The boiler is attached to the CPU’s socket. As such, the weight on the CPU socket is minimal compared to the weight of a heatpipe assembly, consisting of the base, fins and fan.

As an aside, while researching this article, I ran across this:

“There are approximately 100,000 thermosyphons installed on the Trans-Alaskan Pipeline.” Go
HERE for more on this. Apparently thermosyphons are used in the pipeline to prevent the permafrost form defrosting – an interesting application!

If you think about making a heatpipe or thermosyphon, here’s one who tried. There’s a LOT of witchery involved!

I am including a number of references if you’d like to read further on this topic:

The Point of All This

nVidia has announced its tinyCPU, the Tegra. nVidia licensed the ARM 11 processor and snazzied it up with a process shrink that also incorporates its graphics into it, creating an effective system on a chip well before Intel or AMD.

Solid State Devices (ZSDs) have long been considered the eventual successor to the hard drive: electronic rather than mechanical, very fast find speeds, lower power. There have been four reasons why they haven’t already done so: Not big enough Not