One of the critical determinants of thermal grease performance is heatsink mounting pressure. Let’s explore this, along with the flatness of the CPU IHS, and its impact on CPU temperatures!

As this graph shows, there is a strong correlation between thermal performance and the amount of pressure holding the heatsink to the CPU. The most efficient thermal paste, aka thermal interface material or TIM, available will perform poorly if the bond line interface (the thickness of the thermal grease between the heatsink and CPU) is too thick.

One way to minimize bond line thickness is to craft a thermal grease that flows easily – low viscosity. The ubiquitous white grease is a good example. The problem with low-viscosity grease is “pump-out” – the tendency for the grease to ooze out of the interface between the heatsink and CPU, in this case, due to thermal cycling.

Another approach is to increase heatsink clamping pressure. The ancient ones among us remember the early overclocking days of increasing heatsink pressure with thicker springs and thicker washers, some to the point of flexing the motherboard! However, coupled with a low-viscosity grease, performance degraded over time due to pump-out, and grease re-application every 2-3 months was required.

A bulk-loaded higher viscosity grease avoids the pump-out problem but does require careful attention to heatsink pressure for optimum results, as the graph above shows.

The attaching mechanism for the heatsink developed to support the processor should create a static preload on the package between 18 lbf and 70 lbf throughout the life of the product.

Not trivial! If you’ve encountered some stiff mounting pressure on that high-performance heatsink, there’s a reason. You get the best performance at the top end of this spec, 70 lbf. I should mention that if the heatsink is even slightly off balance, or mounted with uneven pressure, you will see an adverse impact. Different cooler manufacturers design their mounting kits to produce various mounting pressures in this range.

Large, heavy tower-type heatsinks which mount horizontally in a desktop can, through their long lever arm, exert enough force on their mounting brackets to impact performance. (This is why larger heatsinks such as the Tuniq Tower use high mounting force.)

Optimal heatsink performance requires careful attention to heatsink mounting pressure and ensuring that the heatsink base is absolutely parallel to the CPU’s IHS.

Heatsink lapping has been used as one means to improve heatsink performance. See our how-to here! As part of the evaluations IC Diamond is doing to better understand user thermal grease performance data, a special pressure-sensitive film from Sensor Products was given to a number of users in different forums who agreed to participate in this test using their own PCs as a test bed.

The test involved first inserting the pressure film between the heatsink and CPU and bolting the heatsink on. The film was then sent to Sensor Products for data analysis. It records pressures on the IHS from 30 to 90 pounds which are translated into data and images for analysis by Sensor Products. After lapping, a new film was used again to record the difference in contact area and pressure. For each test, IC Diamond was applied and temperatures were recorded.

The results are presented below for two approaches:

Progressive lapping on test #23B

Before lapping, high load and high spots were found on the two edges of the IHS. After the first lapping, the high edges were eliminated. The last lapping smoothed out the high spots resulting in a relatively flat IHS (note: the numbers on the left are pounds of pressure).

The performance result was an impressive 5ºC improvement in CPU temps. As the last image shows, the pressure pattern over the IHS is fairly uniform.

Lapping to a High Center Spot

Progressive lapping on test #20B

This was a test to remove the high spots on the edges of the IHS and leave the center as the main contact area, testing the idea that most of the CPU heat is concentrated on the center and improved contact there would be beneficial.

Results showed that it was not a viable idea – it limited the amount of area available for heat transfer. Mounting the heatsink on the bump was like balancing a sheet of plywood on a basketball – the pressure on the center, while high, tended to transmit the load to a bias on one side.

While the performance did improve by 1.4ºC, it was nowhere near the degree of improvement for a uniformly flat IHS as shown in the first series. Quite a dramatic difference even considering the high center contact pressure.

The best lapping objective is a uniformly flat contact patch between the heatsink and IHS. To some this is a “DUH!”, but visual verification of full contact between IHS and heatsink is nice to see.

As a continuation of work to better understand the dynamics impacting thermal grease performance, tests were conducted by users in four different forums using contact pressure film from Sensor Products to evaluate why some users saw marked improvements in heatsink performance after changing to IC Diamond and some did not.

The test involved inserting pressure-sensitive film to record the mounting force between the heatsink and CPU after installing the heatsink on the CPU. The film records pressures on the IHS from 28 to 98 pounds, which is translated into data, two- and three-dimensional images by Sensor Products for analysis.

The results below are selected samples; samples not included were multiples of the same heatsink and CPU mount or those that appear to have been roughly handled in shipping and look to be overexposed; others that were lacking complete thermal data were not included.

In most cases, improved performance is indicated by total force loads above 45 lbs, averaging 53.6 lbs for 16 users. The contact images show broad, even contact with few high spots: 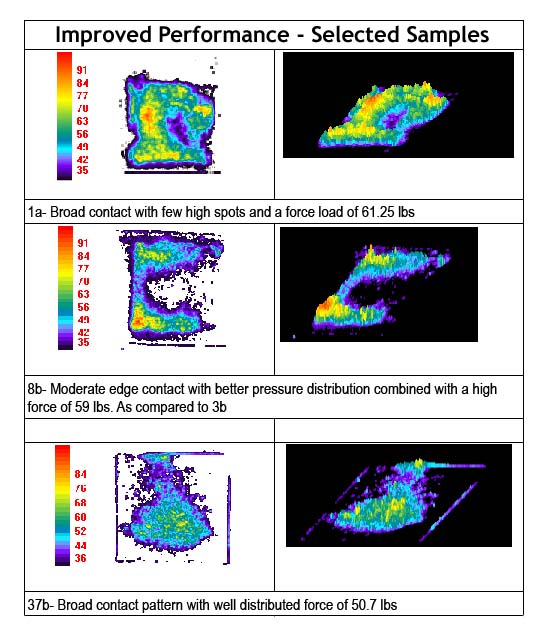 Three users experienced no change even though they had adequate force with an average of 50.8 lbs. A closer examination of the images shows uneven contact, with most of the force applied on the edges: 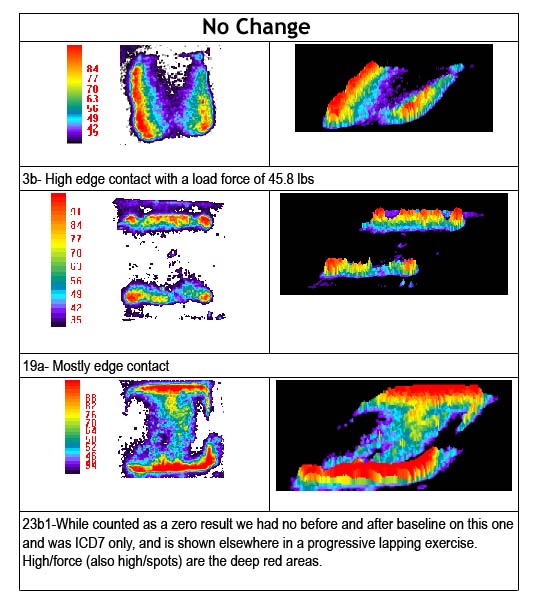 Four users who experienced an increase in temperatures had the worst combination of both low average force (37 lbs) and uneven edge contact, as seen below: 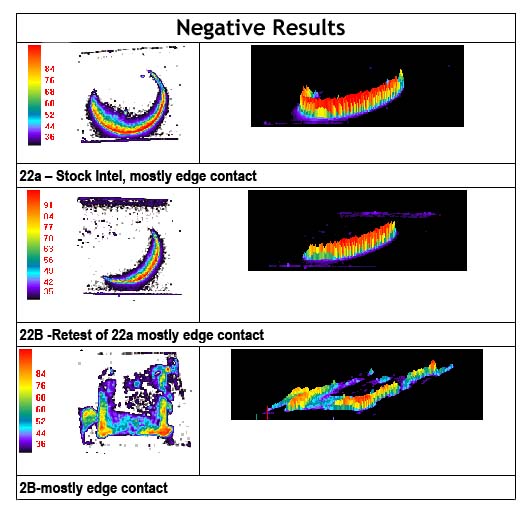 While almost all results fell into the pressure analysis comfortably, samples 14 and 24 did not. A possible explanation is that under marginal conditions, the accuracy of the Intel internal diode or hardware monitoring program is at its limit, being only accurate to within a degree or so. Alternative speculation is welcomed.

The total span of temperatures in the sample group ranged from -5ºC to +3.9ºC, an almost 9ºC spread. Results show that careful attention to contact and pressure can yield significant benefits – as much as the difference between a stock heatsink and an expensive, high-performance heatsink. Forces over 60 lbs will not yield significant performance gains.

Many thanks to those who assisted us in this effort.

Yet Another Means Of Preventing Condensation

SUMMARY: Looks like the performance race is on! Global Win’s latest is a good choice for Socket A CPUs, although the clip is a finger buster. Heatsink Factory* sent us a review sample the Global Win WBK38, its latest entry