SUMMARY: A heatsink that is made of copper will outperform an aluminum heatsink, assuming the same design. The Kanie Hedgehog is a copper Alpha lookalike that almost equals Alpha’s performance – a better design would have resulted in superior results. 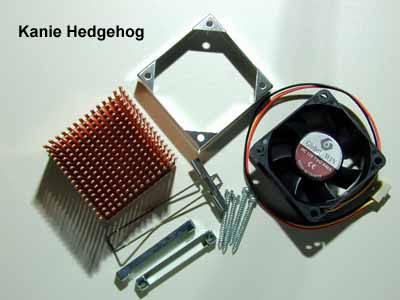 The Hedgehog comes like this – takes about two minutes to assemble – with a YS TEch 26 cfm fan.

A number of readers have asked me about the Kanie Hedgehog, so I bought one to test. On the surface, its all-copper construction would appear to be a strong indication that it will outperform other aluminum heatsinks. Let’s do a head-to-head test against the Alpha PAL6035 and see if the Hedgehog lives up to its potential.

I used the ASUS A7V as the test platform with a Duron 650 running at 900 MHz, 1.84 volts. Temps were measured with the ASUS’s thermal probe placed next to the CPU die. Arctic Silver was used as the grease along with three different fans: YS Tech 26 cfm, Papst 33 cfm and the Delta 38 cfm (right now I don’t know a retail source for the Papst fans – check their website for distributors).

This is a surprise! On paper, the Hedgehog should have an advantage over the Alpha – the only copper in the Alpha is the base, the rest is aluminum. Also note that each heatsink’s performance is helped in about the same manner by different fans (all blowing out).

Let’s take a closer look and see if we can figure out why the Hedgehog is not whomping the Alpha: 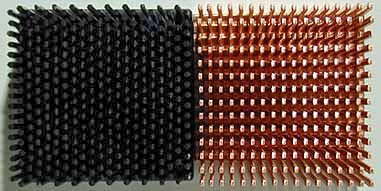 When we put the two heatsinks side by side, we immediately see that they are about the same size. However, what we also see is that it looks like the Alpha packs a lot more fins into the same area as the Hedgehog.

I counted the fins on each:

Hmmm…A closer look at an equal area on each heatsink shows that the Alpha packs in about 15 fins where the Hedgehog packs in 12: 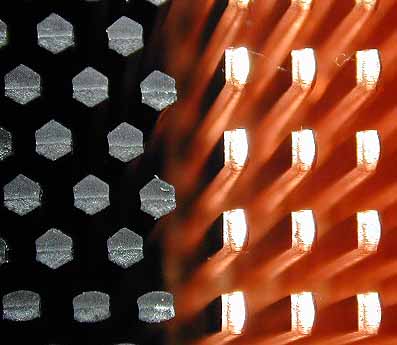 Now I am NOT going to measure the surface area of each pin, but assuming they are about the same, the Alpha’s pin density, hence larger total surface area, I think explains why it does so well against an all copper heatsink. Better design. Simple.

The Hedgehog is certainly a good heatsink but does not live up to its potential due to the “fin gap”. With a better design, it should be a real Alpha killer. At best, right now it’s comparable to the Alpha PAL6035.

I’ve been looking for a way to adequately cool a computer case that doesn’t make much noise so that it can be used as an entertainment center. It would be highly objectionable to be watching a DVD and have to

Not much difference among top brands – Joe