Intel’s Prescott hit the market and it seems like Moore’s Law hit a snag – heat.

The CPU heatsink manufacturers responded along two dimensions – increasing surface area with more and larger fins, and adding heatpipes into the mix to more efficiently move heat to cooling surfaces. At Computex, this trend was clearly evident – here’s an example from Zalman: 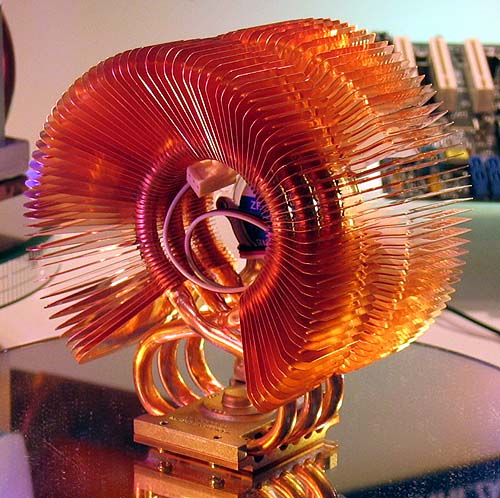 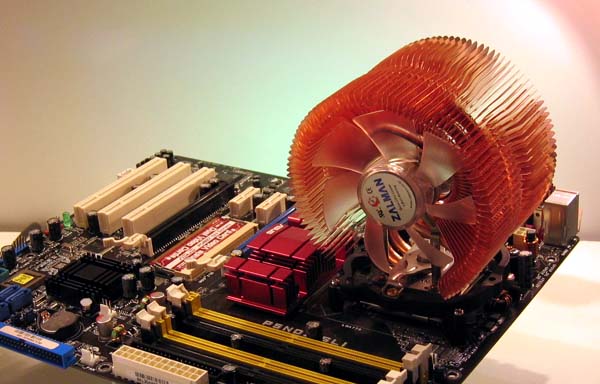 I saw almost universally a move among the manufacturers to larger size and more heatpipes – some examples: 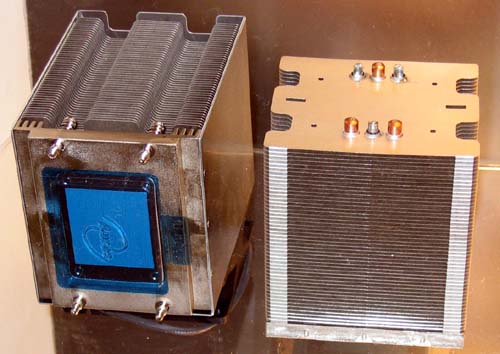 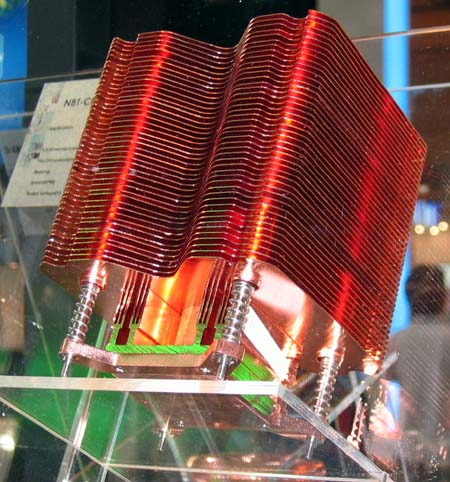 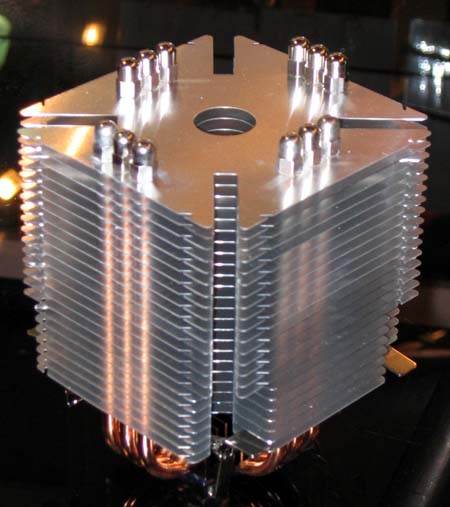 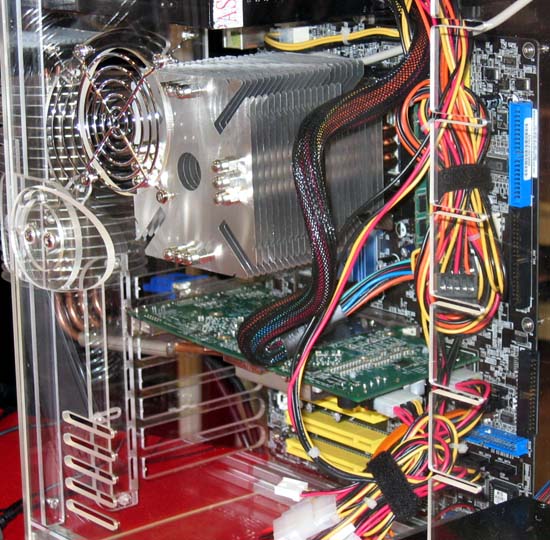 You have to wonder how removing CPU heat from the case will be accomplished, considering two trends that will only exacerbate the problem – First, hot GPUs: 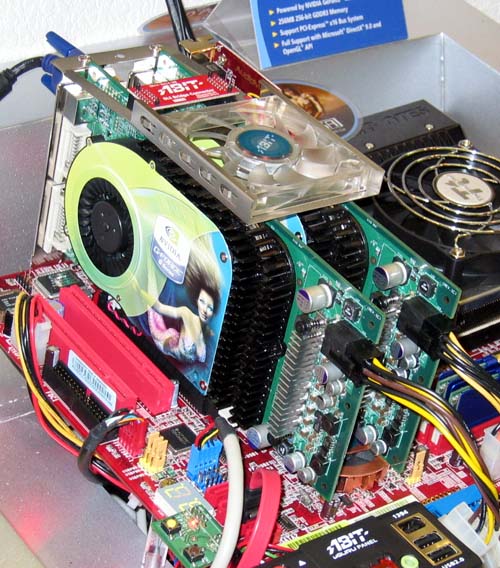 Here’s an example from Abit – in addition to GPU heatsinks, Abit added a third fan above the video cards to keep air moving. I saw all manner of GPU coolers, many taking up two PCI slots. Dumping heat into the case is not a good move – many of the video cards vent waste heat from the PCI slot.

Now in addition the CPUs and GPUs, as frequencies increase, so does heat from other sources – such as chipsets: 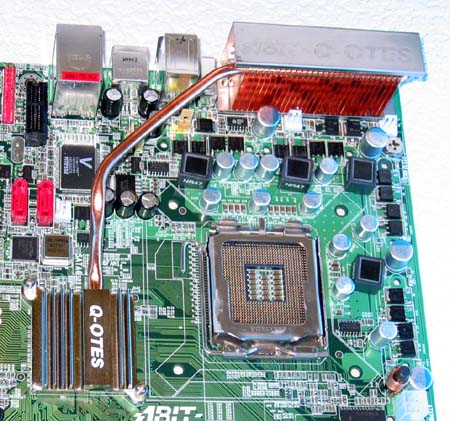 This is the first integrated heatpipe solution I’ve seen on a motherboard for chipset cooling – tells you something about how much heat is being generated. But let’s not forget about RAM: 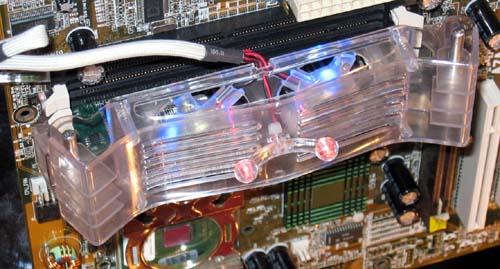 Add to this hard drive heat and you begin to see the issue – case cooling. Long time overclockers have been dealing with this for some time by emphasizing case “breathing”. However, let’s consider the other trend – Small Form Factor (SFF): 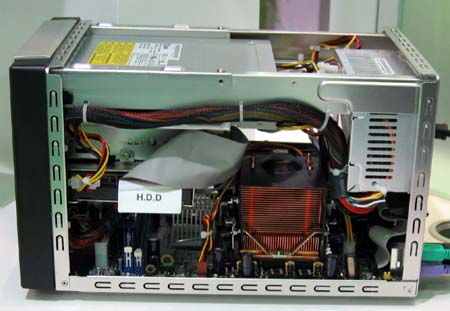 Can you see a hot GPU in here? Another example: 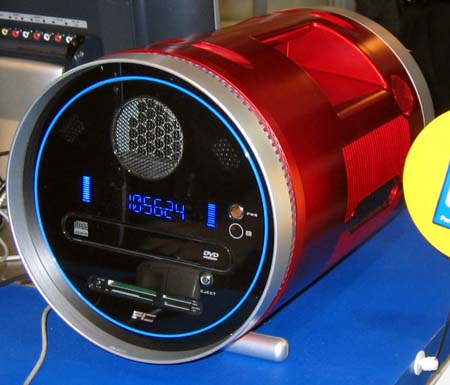 How best to move and dump heat? One answer has been water, which I reported on earlier HERE. A good example of water’s effectiveness is shown in 1U applications, where space is a real issue: 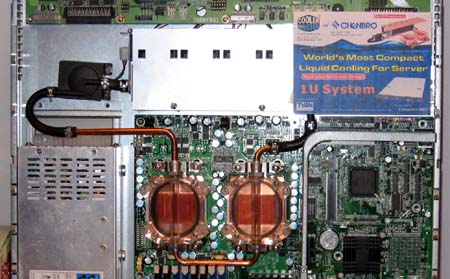 Water has its drawbacks and I don’t know if it will ever become the “Joe Sixpack” solution – I have my doubts (cost, complexity and reliability are factors). 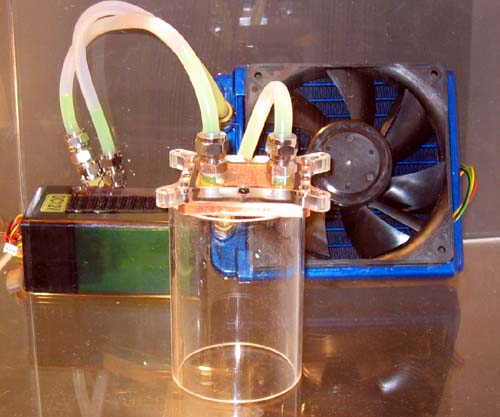 However, the main answer has been more fins, more surface area and more heatpipes. With CPU power at stock speeds topping 100 watts and more (eg, dual cores), the “brute force” option is probably going to bump up against socket weight and case size limitations.

It’s time for a paradigm shift – either new materials and technologies will be introduced that are cost competitive with air cooled solutions or CPU makers will increasingly turn to CPU throttling schemes to keep heat in check – maybe some of both. CPU throttling is an effective tool but is really an admission that CPU cores are out pacing the heatsink’s ability to control heat dissipation. IMHO the consumer gets the short end of the stick – pay for performance but throttle back under stress.

What’s clear, however, is that watt density trends continue to point to cooling challenges that are “off the chart”. Intel’s skunk works continues to look at all manner of exotic heat dissipation schemes, looking for the “silver bullet”. Move over, Don Quixote?

His Name Is Sam, Not Santa

There’s a business league for computing manufacturers called the Semiconductor Industry Association, or SIA for short. They have a website, and their membership list is here. AMD and IBM and Intel are all members. Recently, they put out a press

I got some complaints after writing this piece about hyperthreading. To quote one: “Many applications are written single threaded and will by themselves not see increased results from a hyperthreaded processor. But as soon as you run two applications (like

(Ed. note: This is a merge (with some minor editing) of an exchange between myself and this person, who builds systems for a living. My comments from the article are in italics, my email comments are in bold italics are