I received a computer to fix from a friend. The symptoms were common with a hardware problem: Turns on every time, but freeze after 15 seconds of use (usually at windows boot-up). I opened the case and took one good look at the motherboard; sure enough, leaking capacitors: 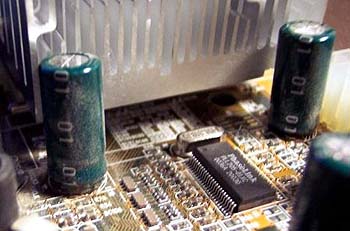 I’ve seen it before, and read up on Abit’s troubles with leaking capacitors but never thought of the simple fix. JUST REPLACE THE CAPACITORS! 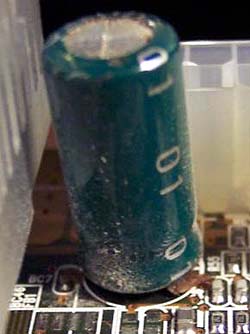 Let me get this straight: I’m not an expert in electronics. I don’t have any schooling or experience in repairing motherboards. I’m just an average computer tech student that likes a challenge. So when I was told on a message board and by Abit that only a ‘skilled technician’ with ‘proper equipment’ could replace the leaky capacitors, I took up the challenge! 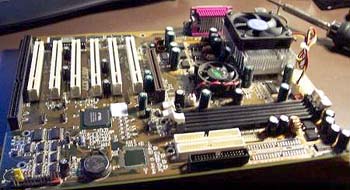 “Soldering at midnight? Why Not? Eh?”

So here’s what I did:

I looked around my room for some tools: 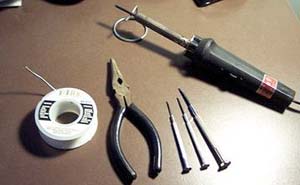 As I said, these are just tools I had handy. I’m sure the solder is not the correct type for my motherboard and the soldering gun is brutally large. But what the hell…. 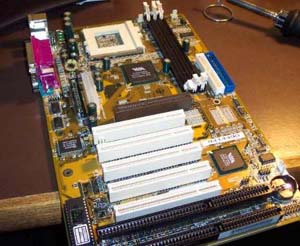 I decided to only replace the three worst capacitors on the Abit board. After that, if I didn’t completely kill the motherboard, I might continue with the rest. 😉

I labeled 3 good capacitors from the AV11 board that would be removed. Place a bit of heat (or in my case, A LOT of heat from my HUGE soldering iron) to the soldering joints and presto! The capacitors come right out!

Well not really. It’s very hard to heat both pins at the same time to remove the capacitors THAT easily. I ended up heating the capacitors one pin at a time, each time moving the single pin out about a millimeter. Soon enough I had all three out. 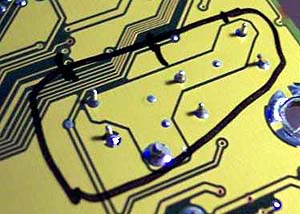 I visually inspected all the leaking capacitors on the Abit board… almost every one was leaking!! I chose the three worst.

Now removal of the three leaky capacitors – this part is a bit harder. Same concept, but I had to make sure that I didn’t apply TOO much heat to ruin the motherboard. A little while longer… but the three worst capacitors are out!

Here you can see the REAL damage from the leaking capacitors: 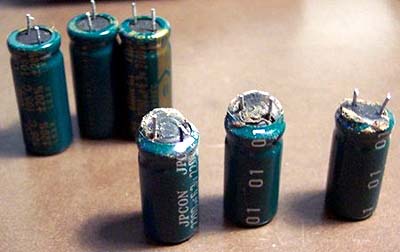 I wiped down the capacitor areas as best I could. I had to use the mini screwdrivers to scrape the leaking ‘stuff’ off the motherboard. BE SURE to be gentle as to not damage the motherboard. 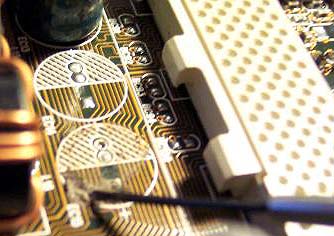 So, I quickly took each good capacitor and cleaned the pins with sandpaper. This made the pins a bit thinner and much easier to thread into their holes.

Wow, What a pain! This is where my cheapo Radio Shack soldering gun should get tossed out the window. What you need to do is heat up the solder from one side as you push the capacitors pins down from the other. Easier said than done.

First thing first. The capacitors HAVE to go in a certain way. You’ll notice that on the motherboard where the capacitors sit, there is a circle with one side shaded. The shaded side matched with the ‘negative’ bars on my capacitors (Just look at the existing capacitors on your motherboard if you’re not sure.) If you put them in reverse, they will explode… or so I hear 😉

Be sure to install them this one pin at a time, much like removing the capacitors. Using all of my patience, I completed the installation of all three good capacitors. I unfortunately was not able to ADD solder to the pins. My solder with my cheapo soldering gun would produce HUGE clumps of solder and ended up covering 2 or 3 pins in the area!

It took me some time to clean it up. Two of the three capacitors are a bit loose without additional solder, but won’t fall out. I thought I’d try it like this first – I can always add solder later if need be. 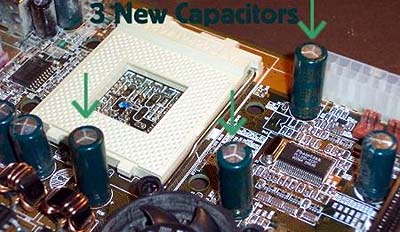 It’s late and I don’t need any exploding capacitors to wake up my folks, so I’ll try it tomorrow.

Safety first! I’d recommend some safety glasses, but since mine are not, I’ll just temporarily cover my capacitors with a CD spindle cover. I have no idea what will happen! 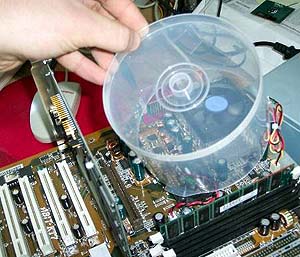 I plugged in parts that I can afford to loose in a ‘worst case scenario’ – ATI PCI video card, 128 of SDRAM and my dying 20 GB hard drive. I pull the jumper to turn it on….. Fans start spinning…. And -‘Boing’- the screen turns on! Nothing seems out of the ordinary on the motherboard, so I allow it to boot up into XP. 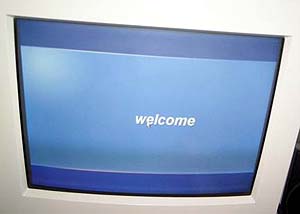 In fact I’m using it right now to finish up my article! I-ROC!

So all in all – a success! About 1 hour of work and a lot of patience has paid off. I now have a WORKING motherboard, for how much longer I don’t know, but for now it works. In the future, I may tackle the remaining leaky capacitors or may reinforce the new ones I installed.

Hope this shows how an AVERAGE tech with AVERAGE tools can accomplish a seemingly difficult task.

Sometimes you can go crazy looking for the right tool when fixing small electronic devices.

Hello everybody! I’m writting this article to those international beginners who came here every week, see the amazing overclocking stuff, but can´t buy them because they are in a distant country – many times in the “Third World”. I´m in