This is one question that hasn’t been asked much. In fact, many people just aren’t interested in ‘how stuff works’ thematics. In this article, I should try to explain how a DC brushless fan works and all the stuff that goes with it, like RPM sensor location, overvolting, etc. 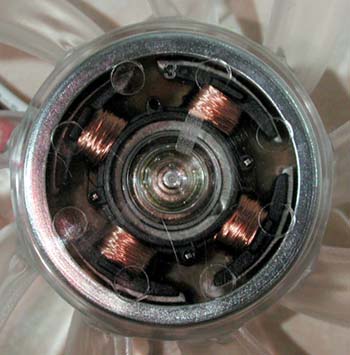 Made in Taiwan (or which parts are inside a fan)

This is the mostly known part of the electromotor. I think that I don’t need to explain much about it. It has two poles – north and south, and using the external magnetic field it is possible to move the magnet around. In a fan, the magnet is circuit-shaped and it rotatrd around its axis.

Electronic Circuit Board and Coils:

On the electronic circuit board is located one small device that is most responsible for this trick. It is called Hall-probe (or Hall-sonde), and its location is just under the permanent magnet.

It’s used to detect the south pole of the permanent magnet. The Hall-probe regulates two different electric circuits driven by two transistors, and depending on the pole it detects, it drives the proper circuit. With this type of regulation, it is possible to create a rotating magnetic field, and rotate the permanent maget located around the coils.

Hmmm… Engineers help!? (or how it works in fact)

A permanent magnet has two-poles – North and South. Let’s look what happens when the fan is powered.

Now, when the magnet is moved, the south pole goes away from the Hall-probe, and as it isn’t sensing it anymore, it drives the second transistor (second circuit). With that, east-west coils are turning on, doing the same job as north-south coils did before.

So, basically the trick was to produce the rotating magnetic field. And it was done very cleverly! 🙂 As coils aren’t made as a moving part, it is obvious that there are no brushes, so that’s the part where the name came from – ‘DC brushless‘.

How fast can you go? (or what about RPM sensor?)

Well, this is the most stupid part of the fan, made out of only one wire. 🙂

The sensor is not located inside the fan, as it would be pretty stupid to mount it somewhere, and on the other hand – too expensive.

Takeoff… (or what about overvolting?)

Huh, this is my part, as I was one of the first who used overvolting with CPU cooling. So, I have to prove that there is no obvious danger in overvolting.

But, I must again repeat that I don’t want to be responsible for possible DEAD FANS! People, be careful, that’s all I can say.

I overvolted a lot of fans, and after I learned how DC brushless works in fact, I wasn’t scared anymore. The problem is the RPM sensor, and overcurrent protection (found on some Delta fans).

Overvolting should be pretty safe because the transistors (SMD type) aren’t heating much. And after all, they are working in switching mode, so heating is really not the problem. The switching mode means that when one transistor is on, the other is off, and vice versa.

The currents I measured are about 50% more than nominal (consider that on normal voltage 12V, the current is about 75% of the nominal value printed on the sticker). The only problem is Hall-probe and the noise produced by such fan (which sounds like a vaccum cleaner).

About the Hall-probe, I don’t get to much excited, and about the noise. Well, that’s the other thing. If your case is good noise-isolated, you could try 24V overvolting, and if not, well – your choice. 🙂

About the RPM value – it is in most cases about 50% more than normal.

My suggestion is not to connect the wire used for the RPM sensor, but if you really want to know RPM readings – it is possible.

Just get yourself one little potentiometer (any value), and connect somewhere on the wire. Place the pot on the maximum resistance and turn the computer on. Read the RPM values. If there is an error, just turn the pot to lower resistance values and see if you can get the RPM reading. When you got your RPM reading, isolate the pot with the duct tape and close your computer case.

Please understand that a friend of mine burned out two VIA based boards.

It is pretty wise to use this kind of protection because you can lower the signal rate from 24V to a value between 9 and 13V, which should be safe for RPM readings.

So, it’s all up to you if you want to experiment. Please, I would be really happy if you send me your RPM readings, or we could try to make some database.

And one note about overvolting”24V overvolting: I was using the -12V/+12V trick, but you could use the 0/+12V and switcher chip to get the voltage as high as you want. And, of course, you could get 17V too.

Note: Delta fans run on 17V safely (and really sound like a vacuum cleaner!). Seems like it has the overcurrent protection.

Thanks: hch FAQ-team for backing me up all the time and to somebody from hr.comp.hardver who directed me to the page where how fan works thematics were explained (sorry, don’t remember who it was). One big thanks to Heretic from ZG who burned his boards and tested the Delta fan at 24V.

Initial Impression of the Abit IC-7 I have a 2.4C, and Abit IC-7 and two sticks of Corsair XMS3500. This article will focus on memory performance, but since you’re here, some comments on the Abit IC7. Good Points It’s cheap,

A couple days ago, to his general incredulity, Joe Citarella posted this link to an article about an Intel-designed water cooler. It would not be at all surprising to find some Intel engineers moonlighting a bit to put together a

AMD has released the initial Barcelona tech documents, the most relevant of which for most people is the Revision Guide for AMD Family 10h Processors. This will tell you about steppings, and the initial release indicates two initial steppings, a