It’s a tragic and all too real fact that thousands of people lose their homes each year to electrical fires. What is worse is that most could have been prevented through education. 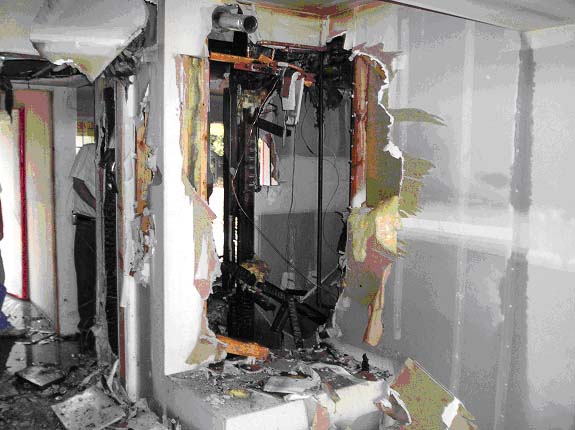 This picture taken at a jobsite before construction was even completed. Though it looks minor, the entire home had to be stripped down and rebuilt. The second story above this had extensive fire & smoke damage.

So you have a shiny new quad-core, quad graphics, RAID 5 with 4 drives, dual monitors, cathode lights, 500 Watt 7.1 sound system and a 1000 Watt power supply. Why is it you’re getting memory errors, random reboots, and hardware is going bad on your $3K + l33t system?!

The majority of people’s homes just don’t have the capacity to power all of this new equipment safely, if at all. In fact, most homes built over 25 years or so ago are probably already straining to supply enough power to current systems. It’s not the computers themselves, either, but all of the other stuff we try to run at the same time – big plasma TVs, home theaters, consoles, a mini fridge, printer, monitor(s), speakers, etc.

What most people don’t consider is that electrical circuits run throughout your home and feed more than one receptacle. Sure, all that home theatre stuff is on the other side of the wall in the living room, but it’s probably on the same circuit. Now you’re down to 98 Volts and you’re getting memory errors, corrupted registries, and damaged hardware. Worse yet, most people will spend hundreds of dollars replacing hardware they think is responsible, while the problem is much greater. Electricity isn’t magic, and if you do not treat it with respect, it will bite you back in a bad way.

However, the majority of the public treats it just like that – magic. I plug stuff in and it works. I used to be like this myself, until I became an electrician. Now I’m going to try to demystify it enough to help you run your system safely.

We’ve been reading about the increasing power demands of processors, mobos, and most importantly, graphics cards for a while. 500 watt PSUs are the norm now, and power supplies in excess of 1000 watts are emerging for the power user. The question remains, “How many Watts can the plug you’re connected to supply?” Well, it could be between 0 and 2400 watts, and it depends on your house. Don’t get scared, but we’re going to do some basic algebra. Actually, I’ll do it for you. Here’s the basics we need:

Ohm’s Law states Volts x Amps =Watts
This can also be stated as:

In addition, most (if not quite all) homes in the US have 15 and 20 Amp 120 Volt branch circuits. This means, like the branches on a tree, each circuit supplies power to several locations. The safe capacity for these circuits is 80% of their total rated load. So now we have an equasion to work with:

This means that everything combined on these circuits should not exceed these numbers. Doing so will cause overheating of the wiring & connections and could lead to voltage fluctuations which will really wreak havoc on all of those sensitive electronics. This may still sound like a lot of power to use, so let’s express it a different way – Amps:

These numbers may actually look familiar, if you look around you. Note that you won’t find vacuums rated for more than 12 amps, since this is the safe limit for 15 amp general lighting (plug) circuits. Likewise, you likely won’t see any hair driers rated at more than 1800 watts.

Most bathroom circuits are 20 amps, but that is only generally true, and hairdryers are “noncontinuous” loads, so 1800 watts is the “safe” limit. Since we can practically guarantee any PSU will be used 24/7 by someone, and the manufacturers cannot ensure that people will have an available 20 amp plug, we will probably see a “continuous load” rating for PSUs top out at 1400 – 1440 watts.
{mospagebreak}

Yes, but only in very limited amounts. Education is key: Electricity is dangerous, but when people find they need more of it, caution tends to go out the window. Here are some basic steps you can do to make your system safer and more reliable:

Try not to use extension cords at all if you can avoid it. If you can’t, stick to 6-9 ft, 14-12gauge cords. Preferably heavy-duty surge protectors with 6 ft cords attached. Those little lamp cords with 3 non-grounded plugs in a rectangle are only good for, well, lamps.

The ground wire and plug are for your protection!! The ground provides the electricity a short, safe path back to ground in order to trip the fuse or breaker quickly. Without a ground, if your equipment shorts to its metal parts, you can become that path to ground.

If the receptacles in your wall don’t have a ground hole, then you likely don’t have a ground wire in the wall. You cannot simply replace a non-grounded plug with a grounded one so that three-prong plugs will fit. You can, however, replace it with a GFCI receptacle. This will sense ground faults and kill power to the receptacle in milliseconds, saving you and maybe your equipment. Best of all, it’s perfectly legal and you can plug all of your grounded cords into it. 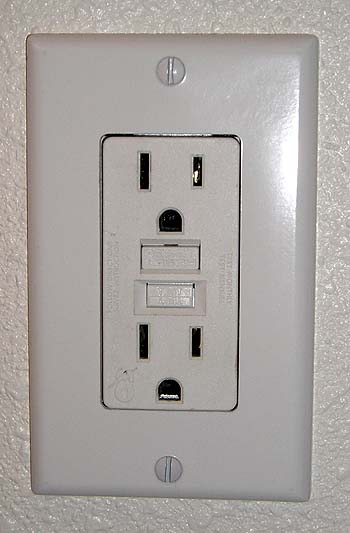 Although there are expensive tools designed just for this, you can do it yourself with a lamp and about 20-40 minutes of your time.

Shut down all of the appliances/electronics in your house and preferably move furniture for easy access to all of the plugs. With a Sharpie, number all of the circuit-breakers or fuses in your electrical panel (if you already have a panel schedule there, you’re ahead of the game!). Electricians number odds {1, 3, 5, 7, 9, etc down the left side and evens down the right).

Turn on one circuit breaker at a time and walk though the house the a lamp. Write down each number and the locations it powers and the amperage of the circuit, or draw a map marked with the numbers. Turn off each breaker when you are done with it to ensure you do not get confused.

Circuits can often span the entire length of a house, hitting only 1 or 2 plugs in a room. There is no standard, so everyone’s house will be “roped” a little different. When you have finished, turn all the breakers back on and clean up your panel schedule/diagram. When you are happy with it, laminate it or cover it with a couple strips of packing tape 😉 and place it somewhere in, on or near your electrical panel. 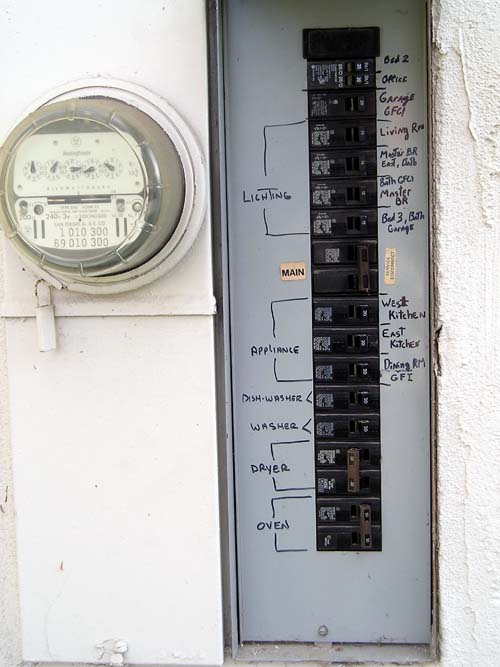 An All-In-One electrical panel, common on the West Coast. Your breakers may be located in a different, or several different, places from your electrical meter 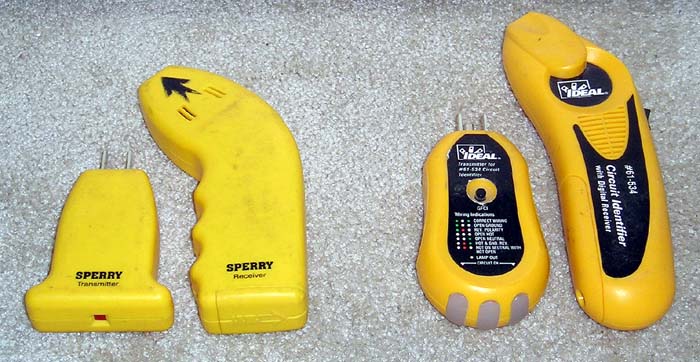 Circuit Identifiers are pricey, but very helpful. The one on the left is much cheaper and not very effective. The one on the right has a transmitter which doubles as a plug checker and GFCI tester and is very accurate. On the cheap, use a lamp or radio!

4. Spread out your power draw.

Since the wires in extension cords and power strip supply cords are generally smaller than the wires in your wall, stringing them together adds more draw to an already limited setup. If there are two plugs on a desk wall plug, plug a power strip into each one rather than one into the other. Since you now know which receptacles are on which breakers, try to split your loads evenly among different circuits. Your monitor and printer don’t have to be plugged into the same receptacle as your PSU.

If you think you have a power problem, try using a multimeter at the receptacles to find out what you have available. Voltages should be between 118 – 121 VAC (Volts – Alternating Current). Test your voltage with all “normal” appliances & equipment turned on and then off, and compare the difference. Do not attempt to measure amps with a multimeter. The amp reading on them is made for testing small electronics and will likely fry your meter if used on a household plug.

Set your meter to at least 200 VAC (Volts, Alternating Current) and put one probe in the left (Neutral or long) side and one in the right (Hot or small) side. Since Alternating Current changes polarity 60 times a second (60 Hz) it doesn’t matter which color lead you use per side. With that fat cord feeding my power strip, I still had 122 Volts with the computer running under load.

Next test from the “Hot” (right or small) side to the Ground. This should also read about 120 Volts. Otherwise there may be a poor ground or other wiring issue

This is a last resort and should not be taken lightly. However, if it is needed then have it done! Straining your electrical system is just a house fire in the making! Please seek a qualified/certified electrician for this task. Be prepared. A good electrician can easily charge from $50 – 120/hr or more. It is not the kind of work you want done by a handyman though.

If your panel has the space and the capacity for more circuits, then one or two dedicated 20 amp circuits routed directly to your office area is the best bet. You may find that your home does not have the capacity or is in dire need of a larger electrical service panel. Your home may be perfectly capable of the loads it was designed for in 1964, but don’t be surprised if you end up finding that what you really need is a $1000 – 2000 service upgrade.

Never, ever, install a larger fuse or circuit breaker than what the circuit is rated for. Overcurrent protection devices are there for safety and do not increase the load carrying capacity of the wires, connections, or receptacles. 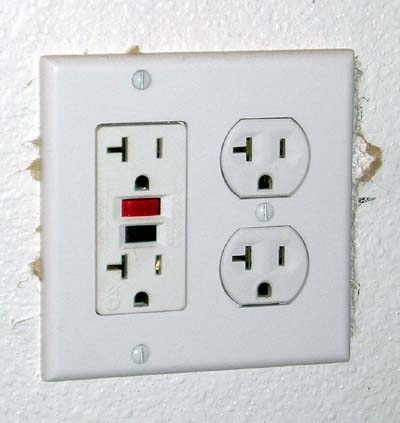 This should go without saying, but I’ll say it nonetheless:

Getting shocked hurts like hell, and can be deadly.

Not to mention it really screws up your tools! I will not be held responsible for damages, death, or personal injuries caused by curiousness or neglect.

Doomsday is approaching on the desktop Hammers. Unfortunately, it probably won’t be Judgment Day. Maybe the best piece of advice we can give you before this onslaught (and, for that matter, any future ones) is that you should simply stop Read More

With all the talk about Vista debuting for a few, and upgrade coupons all around, one issue has been sidetracked a bit: 32 vs 64-bit versions. Let’s start with the good news first. As this site states: “Virtually every Windows Read More