All this started when I got myself that Kill-A-Watt gadget. I plug it in and what do I see? My system’s power consumption is nowhere close to what I imagined it to be.

Hold on, rewind a bit.

It started about a week earlier when I noticed how bloody hot my system runs. That was fine and dandy in winter time – a cozy heater next to my chair. Now, when summer heat is here, that’s another story.

A PC is an electrical device. That means most of that electricity is converted to heat and dumped into the room.
I wanted to know how much exactly heat is produced. The easiest way to calculate it was to get one of the gizmos that measure the power consumption of electrical appliances. The cheapest and the easiest one to obtain was KILL-A-WATT from P3 International, so I put in an order and received one in a mail soon enough.

Now the surprise part came. Stay with me, it will take a bit longer to get to the punchline.

The CPU and the video card are the biggest power draws, the rest don’t consume all that much.
Here’s what PSU draws from the wall (I am rounding up):

The load was running CSS video test (I tried to spice things up by running orthos at the same time but the load didn’t change). Even the peak loads were only a half of what my PCP&C 750 Quad can provide. That made me think “Does it mean I wasted $200 in real money buying a power supply that large?”

Well, I didn’t really feel so – PCP&C 750 Quad is a good, solid piece of machinery that I was hoping would serve me well and long into the future. But nagging doubts remained. And so, I started collecting info and making the calculations. The 750W Silencer hits 80+ efficiency above 150W and keeps it till 600W load according to this review.

Round up the efficiency to 80% and that will give us:

of real power being consumed by the system under full load. Give it a bit of a buffer to stay on the safe side and it looks like all I need is a 380W PSU for that system.

I looked at what’s available on the market and was surprised (second time, count with me!) that there are actually several 380-400W PSUs that can easily power my rig. They are relatively new, have a heavy emphasis on 12v rail and most of them in actuality are single rail even though the labels say otherwise. Most of them have decent efficiency ratings close to or exceeding 80%.

I chose the Antec ea380 from EarthWatts series. Let’s see now – 2 x 12v rails, each at 17A. The juice the components need to run at full load:

Seems to be plenty left for whatever the rest of the system needs. The PSU is rated to draw up to 6A from the wall. All my system needs is 3.2A at full load, so we seem to be safe there as well.

The Antecs have for a while been truly run-of-the mill PSUs – nothing to write home about. My thinking was “Get an average PSU, nothing top notch, and see how that handles”. To my surprise (that’s number 3 – are you still counting?), the Seasonic-built ea380 turned out pretty nice. If not top shelf, then most definitely top of the mid-range, quality-wise.

I must point out that I wasn’t the first to test this PSU with a modern, heavily loaded system. The first guy to jump into the fray was Alexhk of overclockers.com/forums. He did not post his results for a while for the lack of a camera but here’s his thread – check out his post, it’s very concise and informative.

I’ve decided that before I draw any conclusions, I will run the ea380 in my system under as much constant load as I could muster for at least a week. If it didn’t blow-up in that time, I’d declare the experiment a success. Now it’s been more than a week, and I’ve ran Orthos Blend, Small FFT and Gromacs CPU stress, 3dMark2k1, 3dMark2k6, CSS Video test, The Lost Planet Demo DX10 Test, DVD Shrink 3.2 and combinations of thereof.

The ea380 is still alive and kicking.

I am presenting the tests results for your consideration – power-saving futures such as C1 and SpeedStep are disabled, S&M PSU test was ran under Windows XP and Vista, the rest under Vista, Idle on desktop is ~225-230W. 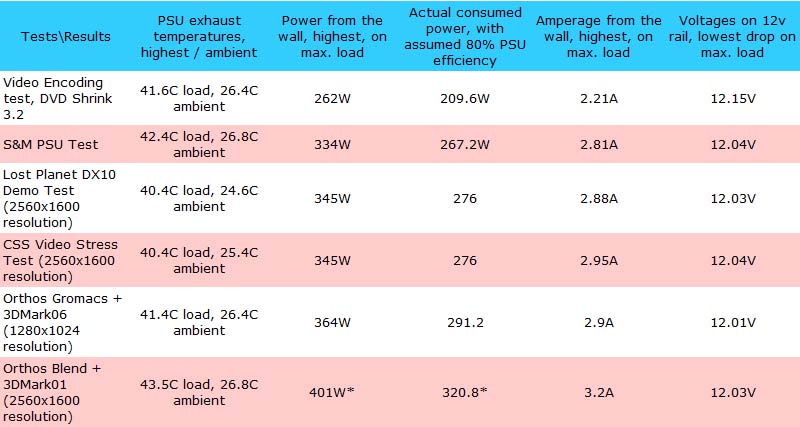 * The 401W reading (row 6, column 3). I got it only once and couldn’t replicate it anymore, no matter how many times I’ve ran the same test. The rest of the runs it got to 380W+ max. Still, I saw it so it’s recorded. Quoting our resident PSU expert Oklahoma Wolf: “Probably a dip in line voltage, thus making the PSU work harder to keep things running.” A very plausible cause.

As I see it – an interesting happenstance to test the limits of the PSU even further.

Please keep in mind – this is not a review of a power supply. It is an experiment, a prof of a concept. Choosing a 380W PSU to power my system was somewhat worrisome but I decided to trust in my calculations.

And so, these are the facts: I didn’t need a 1000W or a 700W or even a 500W PSU to power my system that is at least at the higher end of a mid-range, as far as overclocked systems go and most likely blows majority of OEM boxes clean out of the water. At the most rigorous loads recorded, the PSU was using only ~70% of its capacity, with the absolute peak of 84%, as shown above. That is pretty remarkable and I would have never known it if I hadn’t bothered to question my assumptions, take some measurements, and do a bit of grammar-school calculus.

I am not trying to convince anyone to ditch their large PSUs in favor of smaller and more efficient units. My “green-ness” usually ends with putting plastic bottles in that special recycling box. All I am saying is – don’t take things for granted. While I am sure there’s a place for 1000+W power supplies, are you sure you really need one for the system you are building?

P.S. Thanks to all the forum members that posted in my original thread for all the ideas and encouragement. It’s much more fun to do this sort of things when there’s a constant feedback and support to rely on .

Calling For A New Product ABIT

If you look at the Abit page for its new product, the IC7-MAX3, it boasts of two new features. This article will speak about the feature of more interest to overclocking; the OTES cooling system. Is It Just A Matter Read More

My friend has a PC (Duron [email protected] 100% stable) with Arctic silver and CoolerMaster heatsink/Fan combo. One day, the fan just stopped working for a while at some point We were playing some games and we have noticed that it Read More

You can see their policy here. Basically, they’ll call these cards Radeon 9800s instead, and will put a 128-bit sticker on them. Anyone who bought one and is not a happy camper can either return it to their retailer, or Read More