SUMMARY: It took ice cubes and a peltier, but I made it to One GHz with a Duron 650.

In an effort to determine how receptive AMD’s hotplates are to supercooling, I launched an effort to drive my Duron 650 to as low a temp as I could resonably get with a peltier. For this effort, I used Swiftech’s MCW370. This is a socketed, water-cooled peltier I reviewed HERE.

The setup I used included the following:

After many mountings and dismountings of heatsinks and waterblocks, I finally managed to snap off one of the socket’s center lugs. The pic below shows how I fixed it and in fact came up with a better mounting solution: 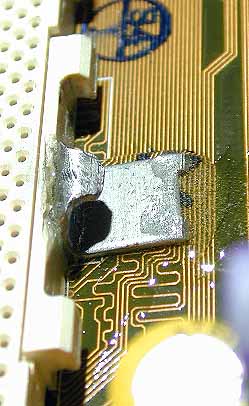 I took one of Swiftech’s mounting clips, cut it to size, shaped it with a Dremel and epoxied it to the motherboard. The motherboard would have to delaminate before this thing pulled off! Now honestly, why can’t someone out there make repair lugs like this – doesn’t even have to be bent – a straight piece of shaped stainless that you could bend to your needs would be a godsend.

Anyhow, I first ran the Duron cooled with a copper waterblock and plain water to set base temps and speed. This chip runs stable at 927 MHz, 41C/106F. All previous attempts to get far beyond that were unsuccessful. For the first foray, I used the MCW370 cooled with water; this watercooler uses a 1/4″ copper coldplate (I also used Arctic Silver for grease). Next, I plopped the pump in a pot of ice water to cool the peltier to lower temps.

To control condensation from the ice water, I wrapped up the MCW370 in plastic wrap like a hot pastrami to go: 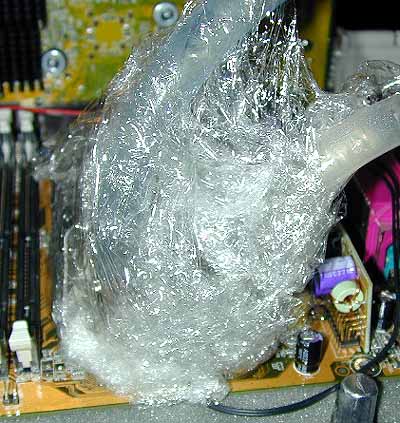 The ice water never got above 2C/36F. I pulled the plug on the ice water test after about 15 minutes – CPU temp was starting to climb as the ice water temp increased. I won’t say the 1009 MHz is absolutely rock stable, but 15 minutes of Prime95 is a lot further than I ever got with this CPU (booted at one Gig but never made it into W98).

The question to AMD users who want to max out their CPUs: To what lengths do you go to attain speed?

I believe the essential problem with AMD’s Socket A CPUs is their extraordinary power consumption compared to Intel’s Coppermines. For example, A Duron at 900, 1.85 v, will radiate 46 watts; a Coppermine Celeron, same speed and voltage: 32 watts – about a 50% difference. And the Celeron may reach 900 at something like 1.75 volts – 28 watts.

Dissipating AMD’s heat is a clear challenge to cooling technologies we have available. The amount of power to cool an AMD CPU becomes a stumbling block. To get more peltier power, either you have to use two peltiers or go to 24 volts – either course requires more effort and expense (how many of you have a 24 volt power supply?).

The essential point of all this is when you start at 25-30 watts and proceed to aggressively cool an Intel CPU, you will get more performance enhancement for the amount of energy supplied compared to an AMD socket A CPU radiating up to twice the energy. Considering the tools we have to supercool and their limitations, you may not achieve the same gains.

Further, in contrast to Intel’s CPUs, AMD’s tolerate heat much better. It is not unusual to see AMDs running in the high 40Cs to low 50Cs, stable, overclocked, over-volted and air cooled. In contrast, Intel’s Coppermines are more heat sensitive and will not attain max speeds at the same temps. Therefore, they benefit more from cooling than AMDs.

Considering the above factors, I believe the following:

As a rule of thumb, if you’re running an AMD socket A CPU air-cooled at 50C, a peltier may give you something like a 5-10% speed gain. Whether the effort and expense is worth it is up to you.

As always, I am more than happy to post any contrasting views.

The following Emails from users are all we know right now on the Blue Durons. It does not look like they overclock any better than greens – we have many Duron 700s hitting 1 GHz+. The only difference in codes

Are you still interested in lower-performance but cheap hotrod boxes?