A friend of mine recently sent me this picture (in a series of many)
in which he applies WAY too much Arctic Silver. He actually didn’t know it was
too much until i told him.

He said he poured the ENTIRE 4.5g-tube on that proc as he thought
that was the right procedure.

I just thought you could post the pic on the site to show people how
NOT to apply Arctic Silver, as there may be others who might have made the
same mistake. 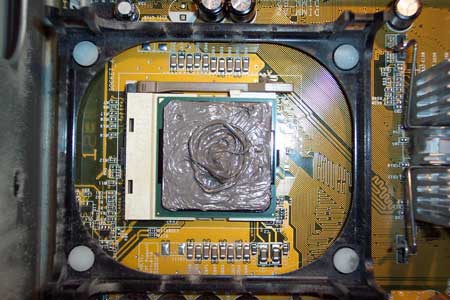 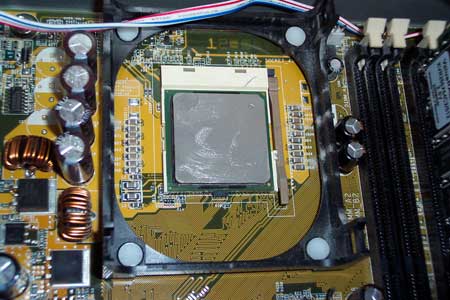 Ed. comment: Human nature being what it is, there are always some who take opportunities like this to say how stupid that person was (and thus how smart they are).

There’s a big difference between ignorance and stupidity. Ignorance is not knowing what to do. Stupidity is refusing to learn what to do.

Whoever among you knew how to do this from birth without being told, let him cast the first stone.

We are all noobs, just about different things. Do unto others as you would have done unto yourself–Ed

There’s an article over at the Inquirer about 64-bit. Since the article raises some important points, and even more importantly, there’s isn’t any important happening at the moment :), we’ll address these point by point. If nothing else, let this

There’s an interview with an AMD exec over here. There’s two items of note: The Gravy Train Is Over We’ve been saying this for a long time, but here it is from the horse’s mouth: “In the end, Fred left