I bought a 64MB GeForce4 Ti 4200 video card on black Friday (the day after Thanksgiving) last year. After using it for a while, I wondered how hot it was getting. It is only mildly overclocked to 275/550 @ 1.6v (stock is 250/500 for this PNY card). I opened up my case after playing a 3D game for a few hours (be careful if you do this when it is on) and touched the backside of the card opposite the GPU and ouch, it was hot! I felt the RAM heat sinks on the backside and they were hot too! “This needs some better cooling” I thought.

I don’t usually get to extreme on my video cooling but I already lapped the GPU heatsink and replaced the stock thermal grease with Arctic Silver III. This was obviously not enough, so I decided to add a blowhole to get some cool air on the card. Here is my case (OK, before people start asking – I forgot to take a ‘before’ picture so this is actually the picture I took ‘after’ with the blowhole airbrushed out – forgive me please! 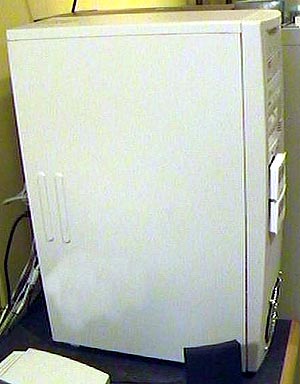 Here is a side shot of the victim video card. The big grey black thing on the upper right is my watercooling pump. It’s not touching the card, they are just “close friends”.

First I made a mark on the back edge of the case side panel, using the video card output plug/cable for reference. Notice I used the bottom of the plug to get as close to the center line of the card as possible. I try to be very precise in my measurements. 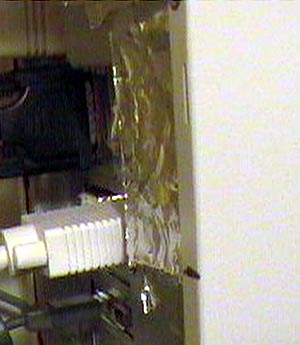 I measured (guessed) the distance from the back edge of my case to the center of the card as shown. Here again, I met my very high ISO 1900 measurement standards. 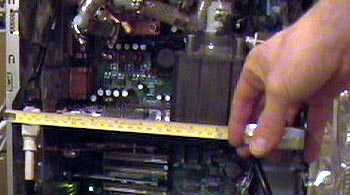 I then used the mark on the back of the panel and the distance I just measured to find the center point for my hole – the small “+” shown here. I had to make sure the tape measure was pretty close to square with the case edge. 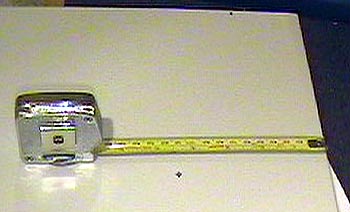 I have a set of very cheap hole saws from Harbor Freight (I think I paid $14 US for them). The 3 ½ inch one close enough to 92mm for me. Here is a shot of the set with the 3 ½ inch ready for action: 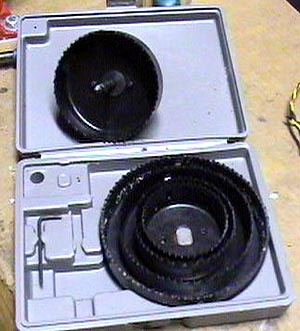 Here is a shot of the panel clamped in my drill press with the hole saw installed. Make sure you clamp your work piece into the drill press very firmly; otherwise, it might ‘spin out’ and be very dangerous.

(Not that I would have ever had that happen to me or anything. OK, there was that one time when I was drilling a hole in a lead brick. But I learned my lesson, really! You would too if a 22 lb lead brick came flying off a drill press at you, but I digress…)

Also, I put a piece of ¾ inch plywood behind it as backing. I’ll show later why I used the backing, but you can probably guess. 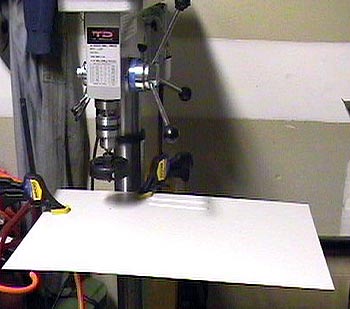 Here is a close up of the pilot drill on the hole saw, lining it up with the ‘+” mark on the side panel I made earlier. 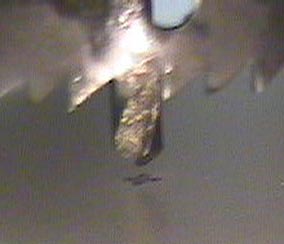 Here I am starting to ‘drill’ the hole. Notice the sawdust? That’s from the plywood backing I mentioned earlier. The backing protects my drill press from the saw part of the hole saw and it helps to keep the hole saw from moving as the hole is cut. As always, don’t forget your safety glasses! 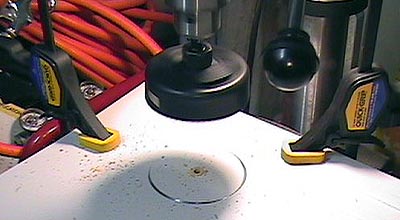 After a lot of WD40 for lubrication and cooling, and some pressing down on the drill press handle, I cut all the way through. My case is steel, so it takes a lot more effort to drill than other lighter materials. Here you can see how the wood backing was useful in protecting the drill press: 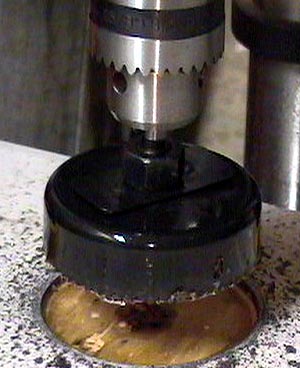 Here is the hole after being cleaned up with a little filing. Be careful because after sawing the hole – I found a very sharp ‘sliver’ of metal from the hole saw that I had to remove. Did I mention that I was wearing leather gloves while I cleaned up the hole? Next, I used a 92mm fan grill to mark the holes for my mounting bolts. 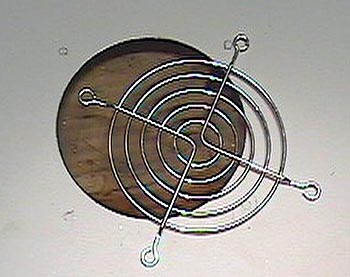 I drilled the mounting holes larger than my bolts to accommodate rubber grommets. As I recall, I think the holes were ¼”. Basically you need a hole big enough for the grommet to fit in but small enough so that it can be held in by its ‘lip’. Sort of hard to see the grommet here: 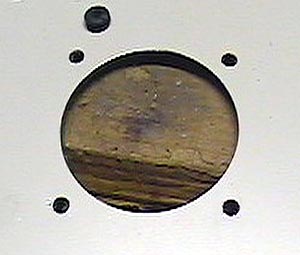 Here’s a better shot from a previous article: 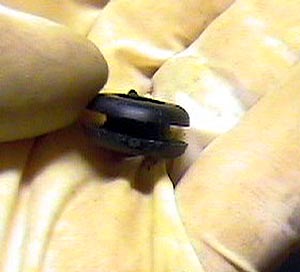 Here is a close up of how the grommets work. They serve to stop vibration between the fan and the side panel. I use bolts because it gives me greater flexibility that normal fan screws. 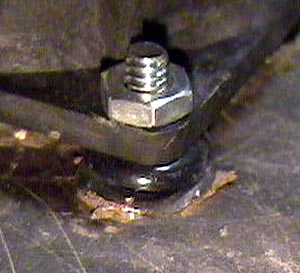 Here is a test fitting of the fan – Looking Good! 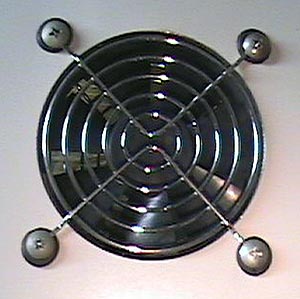 Now it needs some filtration. I hate dust in my case, so I use a lot of these abrasive cleaner pads as filters. They keep out the dust without a much air flow resistance and are very cheap. I bought three of these for $1.59 US at the grocery store. 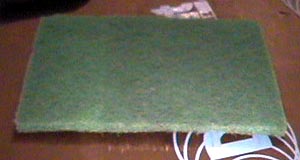 I removed the fan, cut out a square ‘filter’, and then ‘notched’ the corners of the filter about ¼”. This leaves a nice filter. 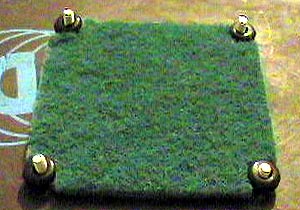 The filter/abrasive pads come in different colors. My first attempt used a red one. I mounted the filter on the outlet side of the fan like this, which didn’t work too well. 🙁 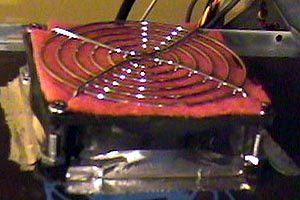 The fan lined up with my video card like this: 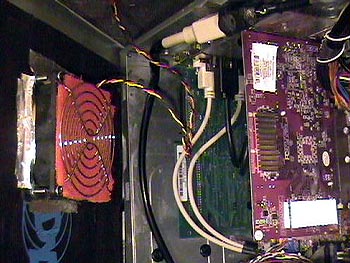 Here is what it looks like from the outside of the case: 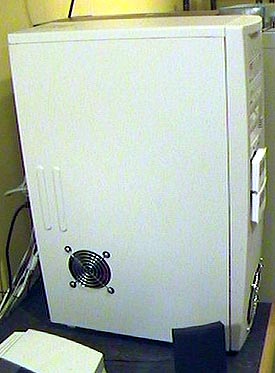 A close up here: 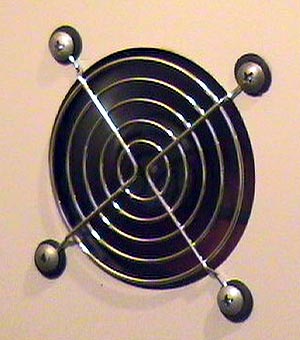 I found that the filter on the fan outlet interfered with the air flow too much, so I moved it to the inlet side of the fan. Now the filter is between the case and another 92mm fan grill, with the fan attached next. You can see the grill and filter here: 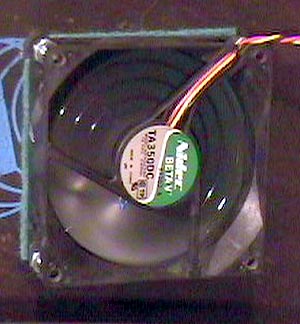 Here is how it lines up with the video card. This shows the ‘sandwiched’ filter also: 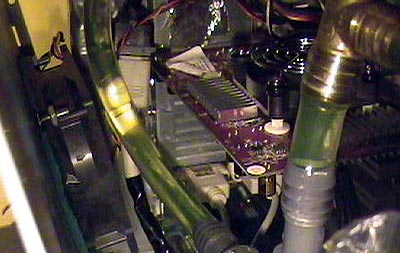 This set up works much better. I can feel the cool air blowing in with more force now. I just have to be careful of the somewhat exposed fan blades. The fan I used is a Nidec Beta V which has a built-in temperature sensor (circled in red) that controls its speed. It is decently quiet and powerful enough for my cooling needs. 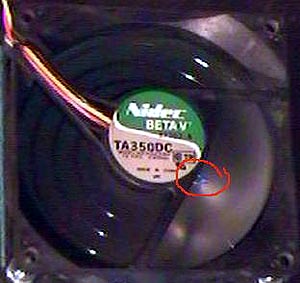 Along the way, I also added a 60mm fan on the top of my video card: 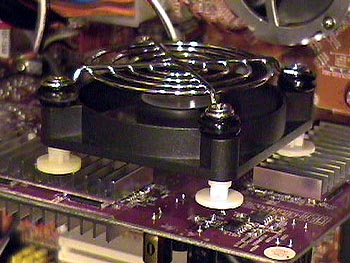 I used these little spacers to keep the fan up off the video: 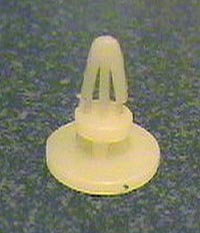 I had the spacers in my spare parts – they were left over from some previous AT motherboards I have scavenged. Here is a shot of part of my parts collection being sorted – I circled the spacers in red. I knew being a pack rat would come in handy someday! : 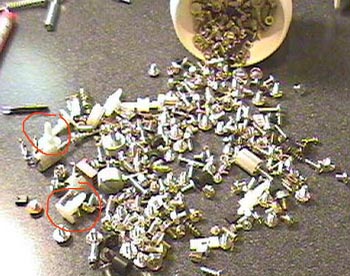 After all this, my video card doesn’t get more than warm to the touch. I call that success! I need to push the card a little more. I’ll probably increase the voltage and see if I can get to 300/600.

I hope you enjoyed my article! If you have any questions, feel free to email me and I’ll see if I have an answer :

SUMMARY: The Senfu and Perma-Cool units are very close in performance but very different in terms of size and noise; however, the Senfu was modified to take 3/8″ tubing – the stock unit takes 2mm tubing and will not perform

AquaStealth – How To Mix Water and Silicon

AQUASTEALTH REVISITED 12/2/99: About three weeks ago I did the review on the AquaStealth CPU water cooler (below). I have been running it since I first tested it and I thought it would be interesting to revisit it. I am