If I even remotely think I might have a use for something, I don’t throw it out. Even if I don’t know what the item is, does, or is used for…
Ask the wife…she’ll verify this. =)

So, in the last couple of years, any time I see a PC of any age, race, color, or creed sitting on the side of the road, I snag it and strip it for parts. I’ve gotten
a good number of really usable items out of some of these machines, and some that I’ll likely never use for much of anything (if anything). I figure I need about a dozen
or so more i486 CPUs and I can tile the bathroom floor with ’em. (no, I really don’t have that many…LOL, but it seems like it).

One thing I invariably grab, if present, are any drives, be it floppy, hard, or optical. I’ve got a few of them, that have been sitting on a shelf, and I recently decided
to finally test them out, and see if any still work, and what speed and media they might read. 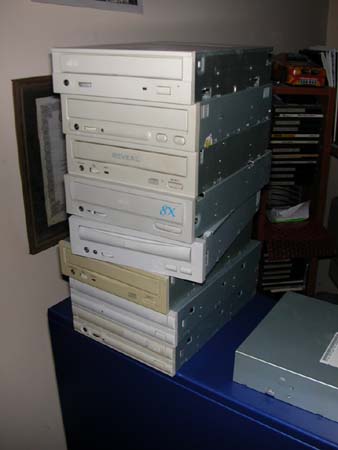 In the process of testing some of these out, I had one drive in the stack I could not identify. It was missing the door on the drive tray, and the tray would not eject. Windows, and
other hardware monitoring programs identified it as a DVD-ROM, however.

That was enough for me to spend a few hours tearing it apart, diagnosing and the repairing the drive.
However, even though it was now functional, it kind of looked nasty without a door on there.

It works, but it’s been hit by the “ugly stick”.

So, I decided that where none of the dead drives in the stack had a door that would at least fit, to conceal the drive itself. This is done by modifying one of the CD bay cover plates
and attaching it to the front of the DVD_ROM.

Let’s get busy and hide a drive, shall we?

Start off by taking one of the 5.25″ drive bay covers, and cutting the retaining tabs on each end off. I recommend a hacksaw for this, but if one isn’t available
use a razor knife. If you do, use common sense, and be careful cutting!!

Before (top), during, and after.

Cutting those tabs off will allow the face plate to sit flush with the remaining plates and/or drives installed, without locking itself in. Take the small file or sandpaper, and
make the areas you cut nice and smooth. Beveling the backside edges slightly will further help ensure it doesn’t “stick”, not allowing the drive tray to open.

The next step, is to remove the faceplate and door from the optical drive you’re working with. The door will need to come off first, and usually clips on the bottom will have to be
released and the door slides UP and off. The faceplate is usually retained by four clips, one per side. Use the small straightedge screwdriver to push these in to release it.
Do the two sides first, then the top and bottom. You should wind up with this: 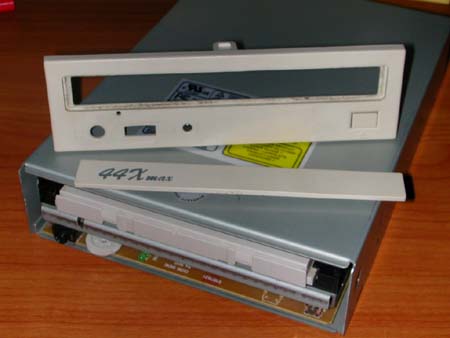 The reasoning behind removing the faceplate is, on most computer cases, with the faceplate on the drive, it won’t slide in far enough. The faceplate is designed to keep the drive
from sliding in too far, which is what we need it to do. The drive needs to sit about 3/8″ or so deeper into the case than usual to allow the CD bay cover to sit flush.

If your drive still has the door (unlike mine), putting it back on will give you more surface area to attach the cover onto.

Next comes the hard part…

There’s a few different ways you could go about this. However you decide to secure the cover to the tray is up to you, but it’s essential that the tray
be able to close fully. Given the fact the backside of the cover (usually) has plastic ribs, there’s not much to secure onto. Removing part of the ribbing,
or covering them, or filling in the open spaces somehow to a point higher than the ribs will give you a surface area to attach onto. If your cover plate
doesn’t have these ribs, you can skip this step, and move on to the next part. You will still need to find a spacer to move the cover out enough to allow the
tray to close, and attach it to the cover.

What I did, was to remove a portion of the ribbing with the pliers where the drive tray would attach. I then took an old drive rail from one of those ancient PC’s I stripped,
and super glued it to the inside of the cover like this: 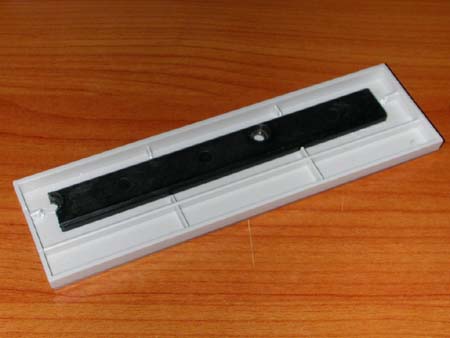 This gives me a large flat surface area to attach the cover to the drive tray, and also takes up most of the space I need to fill to allow the cover to clear
the drive’s shell. Without some form of spacer, the cover would hit the shell before the tray can close fully. This old drive rail I cut up for this is 5/32″
thick. This, plus the thickness of the double sided foam tape I used was enough to allow the tray to close properly.

Actually securing the cover to the tray is best done with some form of non permanent adhesive. While super glue would undoubtedly be stronger, if the tray ever
gets jammed shut, it will make it difficult to open. This is where the “optional” drill and small drill bit comes in. If you choose to glue the cover to the tray,
it would be a good idea to drill a hole in the cover over where the hole is on the drive to manually release the tray. That’s what that tiny pinhole in the front
of almost every optical drive is for. If you insert a paper clip or similar into that hole, you can manually release the drive tray. If you don’t mind a small
hole in the cover like that, drill and glue away! Don’t glue just yet though…you’ll need the drive partially installed to align the cover.

I used double sided tape to secure the cover on my drive. Velcro would work as well, and also take up a lot of the space needed to allow the tray to close. 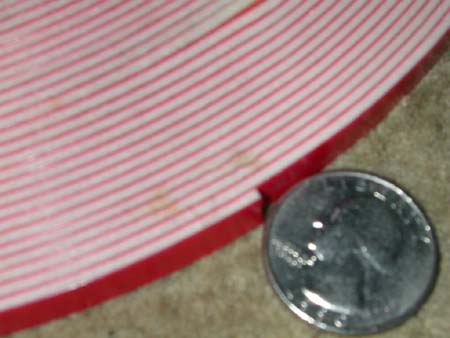 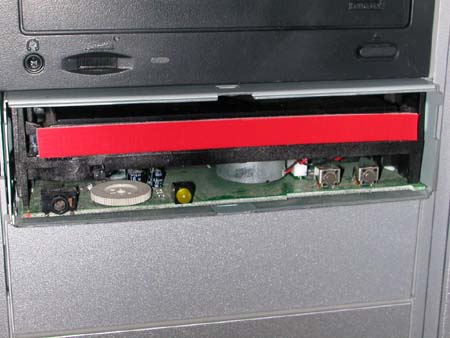 I put one strip across the entire width of the tray

If the drive is out of the computer, put it into the CD bay, but don’t install the screws yet… 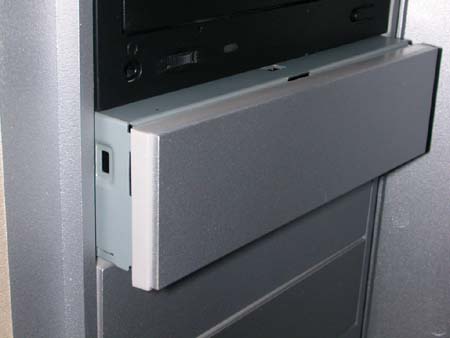 This is about how it should look 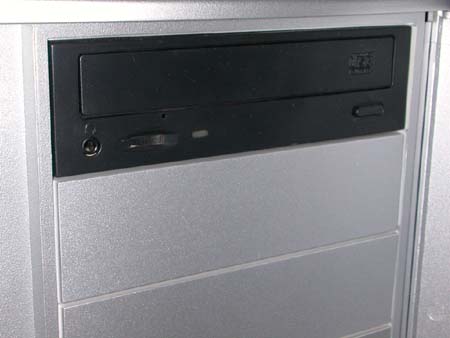 When you’re done, it should sit nice and flush like this

OK….Now that it’s on, and all the buttons are covered up, how do I open it??

That’s easy. Just open “My Computer”, and right click on the CD drive. 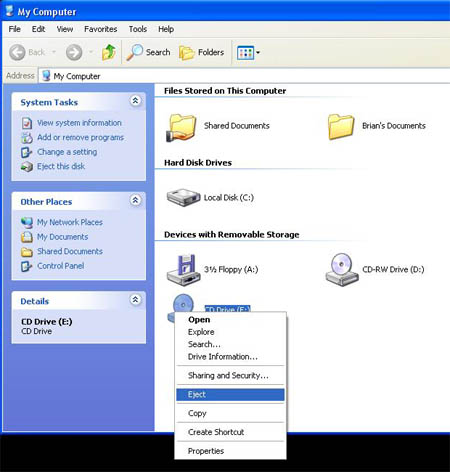 While this case does have a door, and the missing drive tray door wouldn’t be visible, this is one project I’ve always wanted to try. On a case that
doesn’t have a door, this would be a very easy way to cover up a broken or missing faceplate, or a different colored one without having to paint it. Plus it’s really
neat to click on “eject”, and have a CD drive come out of nowhere.

I did finally find an obscure reference to this DVD-ROM, after some sifting and searching… It’s a really “off the beaten path” brand, that reads DVD and CD(R) media
at 5x/24x. Nothing spectacular, but it works, and it was free. I wish that 44x drive I used in a couple pictures here worked…it was dead as a doornail. Oh well…

I’d like to thank all the guys in the Overclockers Forums who’ve passed this tip (and a lot of others) on down.

SUMMARY: An UPDATE, with many thanks to our readers.

After posting my article “How To: Hide An Optical Drive”, I received a lot of e-mails. Most of them were of a similar format:

At that point they split off into two very distinct groups. Both proposed alternate methods of opening the new covered optical drive, other than using the Windows interface. One group suggested a physical remedy, the
other offered ideas on a software fix. Both have enough merit in my eyes to write a follow up to the original article.

Some of those who forwarded ideas on a physical solution mentioned a very key point, that quite escaped me when I wrote the original article. If you’ve “stealthed” your only optical drive, and you need to re-install
Windows, you don’t have the Windows interface available to open the drive. True, indeed. There’s no DOS command for opening a CD drive. The fix, however, is extremely simple.

I had already pulled the DVD-ROM from the article back out of the machine to test a couple more drives, so taking a couple pictures of this will be a lot easier. I’ll remount the drive to test my “fix”, to verify it works. 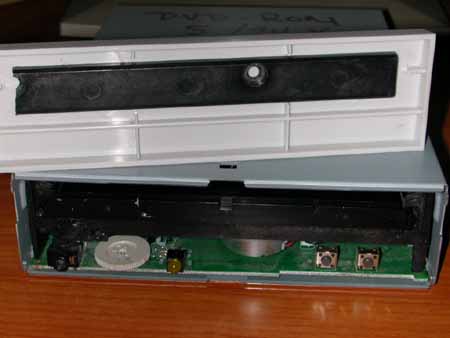 Before: As I left the drive at the end of the article. 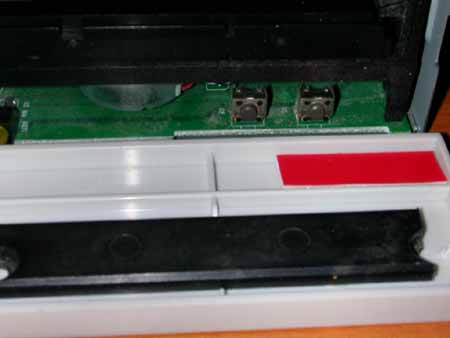 I simply added some (layers of) double sided tape here 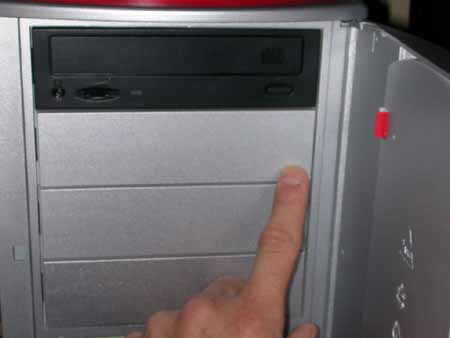 Now, pushing on the corner here… 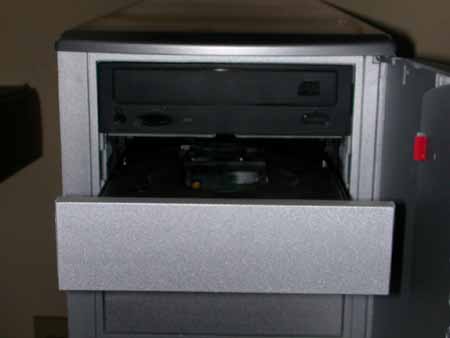 …will open the drive up.
The Software Fix

I had a few of these forwarded to me by e-mail. The jist of them are, they put an icon in the System Tray, that is instantly accessible
and therefore quicker than using the Windows interface I mentioned in the original article.

If you’ve got an Antec/Chieftec/Chenming/etc… case with a door that covers the drive bays, you might want to consider the “physical fix”
over this one. If you click on the tray icon accidentally with the case door closed, it could possibly damage your drive. Note also, that this
remedy will also only work once in Windows itself, so you’re still left with the problem of opening the drive in while trying to format/install Windows.

This first one is a great program. It’s a very small download (372KB), takes about 5 seconds to install, automatically configures itself, and most
importantly, works! I downloaded it and installed it on my main PC while writing this to test it. With my broadband cable connection, it took
4 seconds to download, 5 seconds to install, detected both of the optical drives in the computer, and will eject them both. It puts a small “cd” icon in
the system tray once the program is started, and right clicking on it will bring up a menu that includes “Eject X:” lines for any optical drives you have
installed (“X” = whatever your drives letter designations are).

Here’s another program that opens CD drives, and a lot more. It’s written by Steve Gibson at Gibson Research. I’ve used his “OptOut” software in the past, and
he puts together some great programs.

I’m sure a “Google” search might turn up other programs along the same lines as these. I’m quite impressed by the “Hotkey CD Eject” program, and while I’ve yet to
try it out, I’m certain that Mr. Gibson’s program works quite well, knowing how well his software has worked in the past.

I’d like to thank all of those who took a few minutes to forward their thoughts and ideas to me on this. Some great tips were sent to me. Thanks!!

These Are The Times That Try Men's Souls

This will not be a fun day for AMD fans. There are plenty of reviews out there, and they all say the same thing: the Thoroughbreds don’t overclock very much. Well, I hate to say we told you so, but Read More

What is “HEV”? HEV stands for “Heatsink Efficiency Value” and is my take on a new value to directly compare dissimilar heatsinks. The idea for this value came up while trying to test the difference between copper and aluminum heatsinks. Read More