With regard to: “From left to right: A very fine 30 gauge wrapping wire from Radio Shack, one of my curly locks and the head of a pin [below]:” 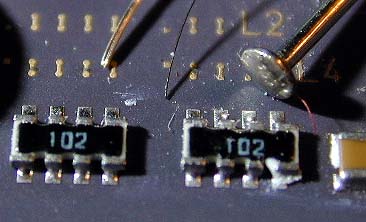 I’ve been in the business for more years than I want to admit. Long enough for my eyesight to be not quite what it once was, but rewiring the multipliers on a Duron is still way within my limitations.

There are a few secrets to doing this:

First, get a good view of the action. If you’re near sighted, take off your glasses, and see if that helps. Otherwise, get a magnifier of some sort. The lab techs use low power binocular microscopes, but that is overkill for the kind of work you are talking about here. Any sort of fixed magnifier should do.

Second, get the smallest soldering iron tip that you can get. Given several choices, take the one with the sharpest point on it. It needs to have a point that is about the size of that 30 gauge kynar wire wrap wire in the photo. Note that the soldering iron tip will be way fat closer to the handle. Don’t worry, that’s not the end that you use to solder with, you use the very end of the tip.

Don’t worry about buying very small diameter solder. It is a convenience, but not a necessity. Any old sort of solder will do, provided it is more or less the usual electronic type (not acid core plumbers solder, for instance). You do not touch the solder directly to the joint, so you don’t need the solder to be as tiny as the joint will be.

Instructions for adding a short wire:

(1) Add flux to the place where you want to attach the wire. Do not add it to the soldering iron, as it will evaporate (or whatever) before you have a chance to use it. Don’t worry about getting the flux right on the joint, just get it anywhere around there, and it will wick into the heat when you touch the soldering iron to the joint.

(2) Get the wire prepared. That means long enough, and held in your left hand so that you are ready to put it to the joint. Don’t cut the wire to its final length before you have soldered one end down.

(3) Clear old solder off the (already hot) soldering iron with a damp sponge. Make sure that the tip is bright and shiny, otherwise solder ain’t going to stick to it. If it’s nasty, clean it up with one of those solder tip cleaners.

(4) Add a tiny bit of solder to the soldering iron tip. Just a tiny amount is enough, not even a bead big enough for you to easily see. Put it as close to the tip as possible. Put on just enough to make the tip of the iron seem a little swollen. If it’s too much, wipe off the excess on the damp sponge and try again.

(5) Put the wire into the position where you want to solder the end, and keep it there by holding with your less coordinated hand. Just hold it in the position you’d like to see it soldered at.

(6) Touch the soldering iron tip to the wire at the joint to be. If you have enough flux, and the wire is properly touching the chip, solder will flow from the soldering iron to the two things to be joined. This step takes about 1/2 of a second. Don’t hold it longer than that, or you could burn a component up. After that half second, pull the soldering iron away, keeping the wire in place. The first joint should be made now, check it for the right “look”. Freshly soldered joints should be shiny, not dull, and you might check to see if you managed to short something also.

(7) If you managed to short something, or if you have too much solder on the chip, use “Solder Wick” to soak up the excess solder. This is a braid of fine wires that hold over the solder glob, then heat up on the back side with the soldering iron. Add flux to the solder glob before doing this, to make the solder flow easily.

(8) Now that one end of the wire is soldered down, trim the wire to length, preferably with a good pair of fine wire cutters, otherwise use the tip of a knife blade against the PCB or chip. Bend the now short wire to its final destination, and repeat the soldering process, but this time it’s easier, cause you don’t have to hold the wire with your left hand.

To attach a wire to a chip resistor, first put a tiny glob of solder onto the end of the wire. Then hold the wire so that the glob is in contact with your table, and is right next to one end of the chip resistor. If you sneeze, the chip resistor is going to go flying. In that case, don’t look for it, unless you’ve got tons of time on your hands and your floor is so tidy that you can use it as a surgical bandage; instead, just get another chip resistor and be more careful.

There’s an article about AMD’s Fab 36 at the Inquirer. There’s some AMD roadmaps (along with a 939/AM2 comparison) at HKEPC.com. Combine the two together, and what do you get? What you don’t get is a lot of 65nm processors Read More

Some personal observations on accessing the web – Joe
Read More